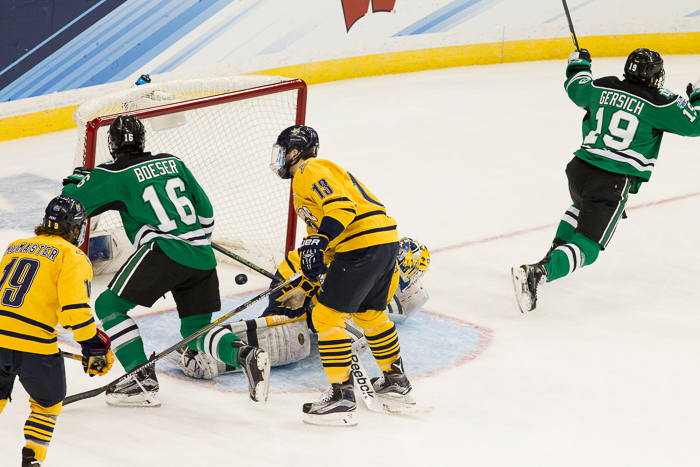 Chaska’s Shane Gersich gets North Dakota on the board midway through the first period as Burnsville’s Brock Boeser, who assisted on the goal, looks on sparking UND to a 5-1 win over Quinnipiac in Saturday night’s Frozen Four title game at Amalie Arena in Tampa, Fla. (Photo courtesy of Jim Rosvold)

TAMPA, Fla. — Brock Boeser was not the MVP of the Frozen Four, but his numbers in the two games should grab any hockey fan’s attention.

Boeser, a freshman from Burnsville, had a goal and three assists and was a plus-4 to help the University of North Dakota men defeat Quinnipiac 5-1 on Saturday before a crowd of 19,358 at Amalie Arena.

“He’s been a special player for us all season long and big players come through in big games,” North Dakota senior left wing Drake Caggiula said of Boeser. “He definitely stepped up today.

“He’s a hell of a player, hell of a kid. It was an honor to play on his line all season long. He makes things happen out there and he definitely took charge today.”

Boeser had a point on each of the first four goals for North Dakota and ended up scoring the game-winning goal in the first period on a bit of an odd play.

Boeser and Austin Poganski, a St. Cloud Cathedral graduate, combined on what turned out to be the game-winning goal. The two forwards were on the ice killing a penalty and their aggressive play was rewarded.

“I was just finishing my check in the neutral zone and he tried to shoot it into a pad,” Poganski said of Boeser on the initial play. “But then Brock used his great speed.”

Quinnipiac goalie Michael Garteig came out of the net to play a loose puck, but shot it into Boeser, who ended up scoring his team-leading 27th goal into an empty net at 14:16 of the first period to give North Dakota a 2-1 lead.

“I saw the goalie come out and I kind of read what he was doing and he kind of gave it away,” said Boeser, who scored the first short-handed goal in a championship game since 1999. “It went off my shin pad and then I had a wide open net.”

He also had an assist on the game’s first goal, which was scored by Shane Gersich. Gersich, a freshman from Chaska, gave North Dakota a 1-0 lead at 11:56 of the first period.

Poganski, a 20-year-old right wing and St. Louis Blues draft pick, finished off the scoring with a goal at 10:41 of the third period to make it 5-1.

“You dream for that, for just helping the team succeed and for winning the national championship,” Poganski said of scoring his 10th goal of the season. “I think everyone on this team had a little part in that today with blocked shots (14), big hits and big saves by (goalie) Cam (Johnson). Cam played awesome and it was a huge team effort.”

Gersich had three shots on goal, a blocked shot and was a plus-1 in the game. He finished the season with nine goals, two assists and was a plus-15 in 36 games for the Fighting Hawks.

Trevor Olson, a sophomore right wing from Duluth, was the other forward from Minnesota in the lineup for the Fighting Hawks. Olson had four assists, 18 penalty minutes and was a plus-11 on the season.

Two of North Dakota’s defensemen in the lineup Saturday are from Minnesota.

Tucker Poolman, a sophomore from East Grand Forks and a Winnipeg Jets draft pick, had three shots, two blocked shots and was a plus-2 for the Fighting Hawks. For the season, he had five goals, 19 assists, four penalty minutes and was a plus-20.

Gage Ausmus, a junior from East Grand Forks, had two assists, four blocked shots, a shot on goal and was a plus-2 for North Dakota in the title game. Ausmus, a San Jose Sharks draft pick, had 11 assists, 31 penalty minutes and was a plus-14 on the season.

North Dakota’s Brad Berry, who played for the Minnesota North Stars from 1991-93, became the first rookie head coach to a national title. Berry, who set a school record for wins by a rookie coach, took over after Dave Hakstol left the university to coach the Philadelphia Flyers. Berry, who led North Dakota to the NCHC regular season title, spent nine seasons as an assistant coach before taking over as head coach of the Fighting Hawks.

Boeser, Caggiula, North Dakota defenseman Troy Stecher, North Dakota goalie Cam Johnson, Quinnipiac center Travis St. Denis and Quinnipiac defenseman Connor Clifton were named to the all-tournament team. Caggiula, who had four goals, an assist and was a plus-5 in the two games, was named Most Outstanding Player of the Frozen Four.