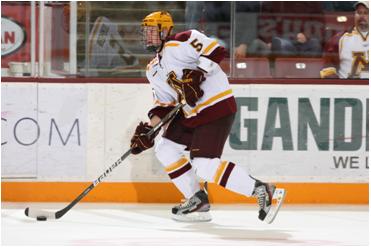 Blake Thompson had two points in five career games as a Gopher.

The 6’ 3”, 210 lb. Thompson had yet to play this season after skating in five games for Minnesota as a freshman when he registered the only two points of his career with a pair of assists in his collegiate debut against Sacred Heart on Oct. 7, 2011. He also received seven penalties worth 25 minutes and blocked three shots.

Thompson played his sophomore year of high school hockey at Eden Prairie where he received Associated Press All-State honors. He then moved on to the United States Hockey League’s Sioux Falls Stampede which had selected him in the 2007 Futures Draft.

In Sioux Falls Thompson played the 2008-09 season under former Gopher Kevin Hartzell and participated in the 2009 USHL All-Star Game. He spent the next two seasons with the Waterloo Black Hawks where he led Black Hawks defensemen in scoring and was Waterloo’s Fan’s Choice Player of the Year.

Thompson’s decision comes with little surprise considering the abundance of depth on the Minnesota blue line. The Gophers returned seven defensemen (including Thompson) this season and brought in blue-chip freshmen Brady Skjei and Mike Reilly.

Even with Lucia experimenting with playing Justin Holl and Ben Marshall at forward, there was only so much playing time to go around. At the annual Gopher Media Day luncheon just prior to the season, Lucia mentioned the possibility of redshirting Thompson but there is nothing to indicate that process was ever initiated.

“While I’m disappointed in Blake’s decision to transfer, I respect his choice and appreciate his contributions to the program over the last two years,” Lucia said. “Our team and our staff wish him the best as he moves forward.”