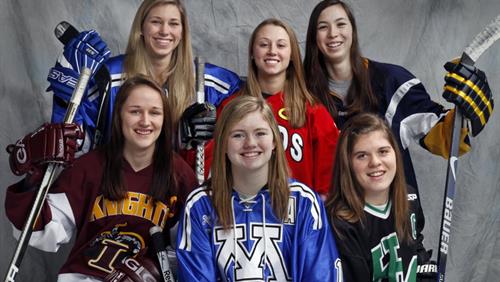 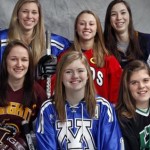 Rachael Bona, Meghan Lorence and Rachel Ramsey were all phenomenal high school players. All three played in the MSHSL State Tournament and all three were Ms. Hockey Finalists. Since their arrival at the University of Minnesota, they’ve promptly racked up a 75-5-2 record and won back-to-back National Championships.

MHM: Summarize what it means to you to start your collegiate career with back-to-back championships.

Lorence: Winning a National Championship is something that I have always dreamed of, but winning it back-to-back years is really surreal. My class has been very spoiled being apart of both championships our first two years with the team and luckily, we haven’t had to experience what it feels like to be on the other end. The coaches and some of the alumni keep reminding us of how hard it actually is to win a National Championship and always jokes with my class about how we probably think this is how our seasons will always end. We are very blessed and grateful to be apart of this history in the making.

Ramsey: It really is something special and there is truly no way to describe it. One championship in four years is an awesome accomplishment, but two in two years?? It obviously doesn’t get better than this. It does mean, however, that we have a lot to live up to in the next two years, but I think we’re up for the challenge.

MHM: Besides talent, what made this team so special?

Lorence: The character of the team is what makes it so special. Going to the rink everyday to play the game that we all love with 21 of your teammates that have become family, it doesn’t get much better than that. Everybody gets along so well that it makes it even more special to be apart of this team.

Ramsey: It was just the chemistry that we had off the ice. I wouldn’t have wanted to win this championship with any other girls. What this team has is something truly special that will be very hard to replicate.

MHM: How did you handle the streak? You were all very good at downplaying it, but it had to have been on your minds.

Bona: It wasn’t on my mind until we started getting close to breaking the NCAA record. When that came along I really wanted to keep the streak alive so that our team could be apart of a great record like that. After we beat that, I didn’t really think about it much again until the end of the season when we couldn’t lose a game or our season would be over. At that point, obviously I wanted to keep the streak alive just for the sole purpose of hopefully winning another National Championship.

Lorence: We always tried not think or talk of the streak and just focus on trying to win the next game. However, as the season moved along and we were at a thirty game win streak, I will admit that it was a pretty hard thing not to think about. We were setting records and making history every game we played and ending the season 41-0, then overall 49-0, it was unheard of. Just knowing that nobody will ever be able to beat our perfect season, is something special and hard to believe. I could never have dreamed of accomplishing something like this.

Ramsey: You just had to put it in the back of your mind. If you focus on something like that too much, it’s going to get to you. Of course, it pops in your head every once in awhile, but thinking of losing was never a big deal during the regular season. It’s losing a championship that’s going to hurt in the end.

MHM: Going into your third season at the U, and being an upperclassmen next year, does that change your approach?

Bona: I don’t think it will change my approach much, just that I will continue to try to be a leader on the team. Now that half the team is younger than me, I will try to set good examples and be someone that they can all come to with questions.

Lorence: No, I don’t believe so, other than just helping the freshman feel welcome to the team. I know how intimidating that can be coming into the program and not knowing what to fully expect.

Ramsey: I think it makes me think more about a leadership role. The past two seasons I have looked up to the upperclassmen so much, and now the roles are reversed. It puts into perspective that how you play and the effort you put forth doesn’t just effect you, but the underclassmen as well. They’ll be looking at the older girls for how to act.

MHM: What is it about Minnesota that attracts the top talent?

Bona: I think that, first off, we have a program that is well known and obviously has had some very talented teams in the past. It also has such a wonderful coaching staff that I think anyone would be thrilled to play for and its also such a great school academically. Personally, I love the campus here.

Lorence: The University of Minnesota first and foremost is one of the top schools in the nation, so it is hard to turn down the opportunity to get an education from this University. Then, the facilities, staff members, resources, culture of the team and coaches, and, of course, the history of the program is top notch and hard to come by. Minnesota has made a great name in the hockey world, in particular, and hockey players dream of becoming a part of this program.

Ramsey: I think most kids playing hockey in Minnesota want to be a Gopher when they grow up. With so much talent coming out of the high school leagues here, the U has their pick at almost all of the state’s top prospects. Then when you get those players, others from around the country and the world see the kind of program that’s being built and they want to be a part of it too.

Bona: The fact that they are more than just a coaching staff, they are also our friends and I have heard the [out of state/country] girls say multiple times that they are also parenting figures to them. They are some of the nicest people you will ever meet and are just such a joy to play for.

Lorence: They are great coaches but, more importantly, even better people. We know we can always go to them for advice, hockey related or not, because they truly care about us as people, not just as hockey players. They push us to get better in every aspect of life; to become better people, to do well in school and get a great education, then, of course, become better hockey players. I believe this is what sets our coaching staff apart.

Ramsey: Our coaches are incredible. They get to know each and every player on a personal level and the players look up to all of them as parent-like figures, rather than coaches. You know you can walk into any of their offices or call at any time and they’ll talk with you. Whether it’s hockey or personal, they know what to say and they genuinely care about you as a person.

MHM: What is the mindset going into next year?

Bona: My mindset is to just have another great year and give ourselves the best opportunity to play for another national championship.

Lorence: My mindset going into next year won’t be any different as it has been. I just try to get better each day and push my teammates to do the same. It will be a whole new season and nobody knows what could/will happen. We have to work hard for our success because when you are wearing the “M” you get every teams best each game. We have to rise to the occasion and never take a game off. I love it!

Ramsey: Work hard and put your best foot forward. We are losing a lot of talent because of graduation and the Olympic year, but we also have a lot of talent coming in. I know that the team is going to work hard this summer and that we’ll be ready in the fall to showcase what we’ve got.

MHM: What do you want people to know about Gopher Women’s Hockey?

Bona: That we are more than just a hockey team; that we are one big family. That all 22 of us feel like sisters and this is the best place that I could ever be. I am so grateful to have had the opportunity to play here and to meet the people I have.

Lorence: We take great pride in wearing the “M” and we are grateful for the opportunities that we have had to prove ourselves. We appreciate all of the support from our fans that keeps continuing to grow – you are all a big part of our success. The team has a special bond that has become family and the coaches are not only great coaches, they are great people who are there for each and every one of us. We have had a lot of success throughout the years and I see that continuing to be the tradition of Gopher Hockey in the future.

Ramsey: The Gopher Women’s Hockey Program is truly special. It’s a program with a lot of history and still a lot of history in the making. When you come to a game, you are guaranteed an amazing display of skill and work ethic, and if you run into members of the team or staff off the ice, you are coming across a great group of people.

Jessica Christopherson is from Coon Rapids, Minnesota. She was a three sport athlete in high school and went on to play soccer and hockey at the University of Saint Thomas, where she received a B.A. In Sociology. She was a four year assistant coach at UST and is currently the Head Coach (3rd season) at Coon Rapids High School, where she was named Section 5 Coach of the Year in 2011. She recently completed her USA Hockey Level 5 Coaching Certification and was also named as a coach on the SportsUnited / USA Hockey Trip to Russia in October 2012.