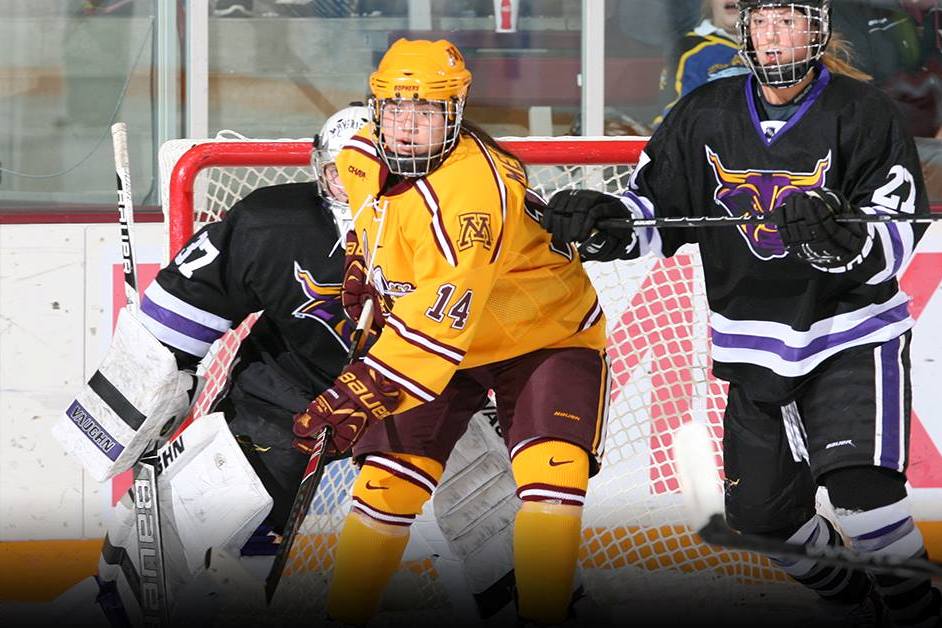 Minnesota junior forward Maryanne Menefee scored her 20th and 21st goals of the season in the Gophers’ 5-1 series-clinching win over Minnesota State on Saturday at Ridder Arena. (Photo / University of Minnesota Athletics)

After a scoreless first period at Ridder Arena, the junior forward scored twice in a span of 1:43 against Minnesota State. The Gophers, out-shooting the Mavs 33-20 over the final two periods, were able to get three goals in the second period and took over from there.

The team was able to refocus and find reserve energy at home in a 5-1 win over the Mavericks, sending the crowd home with a stick salute and a two game sweep in the best-of-three WCHA first round series.

“Win and advance is kind of the theme here as we get to the playoffs,” Gophers head coach Brad Frost said.

A night after giving up 10 goals in a shutout loss, Minnesota State (3-32-1, 1-26-1-0 WCHA) allowed a season-low 3 shots in the first period against the WCHA regular season champions. The Mavericks kept Minnesota’s forwards at bay on the outside of the rink, making it easy for senior goaltender Erin Krichiver.

“I feel like that’s happened a few times this year where we just came out not ready and then the coaching staff had to get after us a little bit and definitely push us in the right direction, which we definitely need at some points,” Menefee said.

On the other side of the rink, Leveille and Minnesota survived the period. She nearly matched her Friday total in 20 minutes, making 15 saves and remaining as golden as the team’s Saturday sweaters.

“There were a lot of things that I didn’t need to say, but felt like I needed to,” Frost said about his team turning it around after the first intermission. “Getting out-shot 15-3 against any opponent is not good. So we just talked a lot about heart and passion and being all-in or not. It was mandatory that they picked it up and they did.”

The Gophers came out with more energy and passion in the second, setting the tone early when Rachael Bona found Meghan Lorence in front of the net in the opening minute with a point-blank shot that Krichiver saved.

Her shutout stood until just over 4 minutes into the second period. Sitting in the high slot, Menefee tipped a Megan Wolfe shot past Krichiver to break the deadlock.On her next shift, the Lansing, Michigan native shot the puck through traffic and into the net for her 21st goal of the season.

“I think (goals) definitely come in bunches (for me) so I’m happy they came tonight,” Menefee said.

Kelly Pannek made it 3-0 Gophers towards the end of the second period when she poked a loose puck into the net for her 13th goal of the year with 3:48 remaining.

Hannah Brandt scored her 31st goal of the season 8:46 into the third period when she buried a Kelsey Cline rebound. Seconds later Rachael Bona gave Minnesota a 5-0 lead with a goal on the backdoor before Kathleen Rogan, on her eighth shot of the night, broke a 12 period scoreless streak for the Mavericks.

It was only the 7th goal given up by Minnesota in the last seven games and also the first-ever goal scored on the senior Sletta, making her 12th appearance for the Gophers.

“There was one more opportunity to get our senior in who means a lot to our team and that’s what was best for our team at the moment so that’s why I (put Sletta in),” said Frost. “Somebody who came in and wasn’t guaranteed a minute and she still wanted to come and be a Gopher. She’s played a lot than one minute. She’s played many.

“It was unfortunate that that goal went in, but the opportunity for her to play one more time was pretty special for her.”

With the win, Minnesota faces the winner of Bemidji State and Minnesota-Duluth on Saturday March 7 in a WCHA Final Faceoff semifinal. The Beavers and Bulldogs are currently tied at one game apiece with Bemidji State winning 3-2 Friday and UMD taking Saturday’s Game 2 2-0. The third and final game will be played Sunday at 2 p.m. in Duluth.