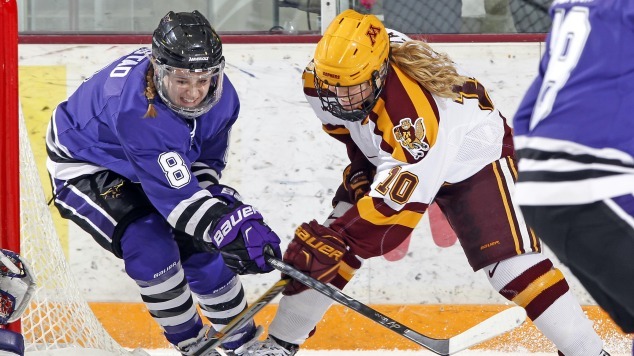 MANKATO – On Hockey Day Minnesota teams from all over the state face off against one another and help celebrate our roots as the state of hockey. While high school teams took to the ice at Holman Field in St. Paul, the Gopher men’s team at Mariucci Arena, and the Wild at the Xcel Energy Center, there was another game being played today a little further south.

The Gopher women’s team traveled to Mankato, Minn. to square off against Minnesota State in game two of a weekend series. While there were two WCHA points on the line in this contest, it was also a special afternoon as two in-state teams faced off against each other on Hockey Day Minnesota.

Minnesota, the no. 2 team in the country, was looking for the series sweep and continue their winning ways as they were unbeaten in their last 14 games heading into today’s afternoon match up. MSU on the other hand, was looking to come steal some points from the Gophers this weekend and add another win to their record after picking up their first two victories of the season a week ago.

“Mankato was coming in after getting their first two wins so they were playing confidently,” said Minnesota coach Brad Frost. “We wanted to make sure that we started quickly in both games and I think we did a good job of that here.”

Start quickly is exactly what Minnesota did.

Just 1:26 into the game, Gopher leading scorer Hannah Brandt gave Minnesota a quick 1-0 lead. From there the two teams would trade chances until Minnesota seemed to break this game open just past the midpoint of the first period.

Gopher captain Rachel Bona tallied her 12th of the season shortly before Minnesota freshman Kelly Pannek netted a power play goal to give the maroon and gold a 3-0 lead to close out the first period. The Mavs had a chance to get back into this one, but had trouble finding the needed offense to get on the board.

Starting the second period on a 5-on-3 power play, the Mavericks couldn’t find the back of the net and Minnesota poured it on immediately after killing the two penalties.

With a 6-0 lead heading into the third period, MSU was looking to get on the board before this game was all said and done, and they did that before the midpoint of the final period.

Maverick freshman Hannah Davidson scored her fifth of the season to put MSU on the board on a pretty passing play where she redirected a Nicole Schammel pass into the Minnesota net to bring the game to 6-1. That’s where it would end for the Mavericks, however, as Minnesota would add one more before the final buzzer when Gopher sophomore Lee Stecklein buried her first of the year during 4-on-4 play when she walked out of the corner and around MSU goaltender Brianna Quade for the score and a 7-1 Gopher victory.

While MSU had a handful of scoring chances, they just couldn’t seem to find a way to get their shots through, and like many teams around the nation, had a hard time containing this potent Gopher offense.

“We tried to match up with them today but you look at that top line and you’re talking almost 400 career points,” said Means. “We’re asking some freshmen who are in their 20th game of their career to go out there and handle those girls and that’s a tough task for anyone, let alone freshmen.”

Minnesota would leave Mankato with a 7-1 win and the series sweep. For one of these Minnesota teams, the day ended in sweet victory, while the other suffered their third straight loss. Though both teams can appreciate playing on this special day and celebrating our hockey heritage in this great state.

“Hockey Day in Minnesota, where else does it happen in the United States?” said Minnesota coach Brad Frost. “It’s such an honor and privilege to coach at the University of Minnesota and to be able to have two Minnesota teams square off here today was pretty fun.”