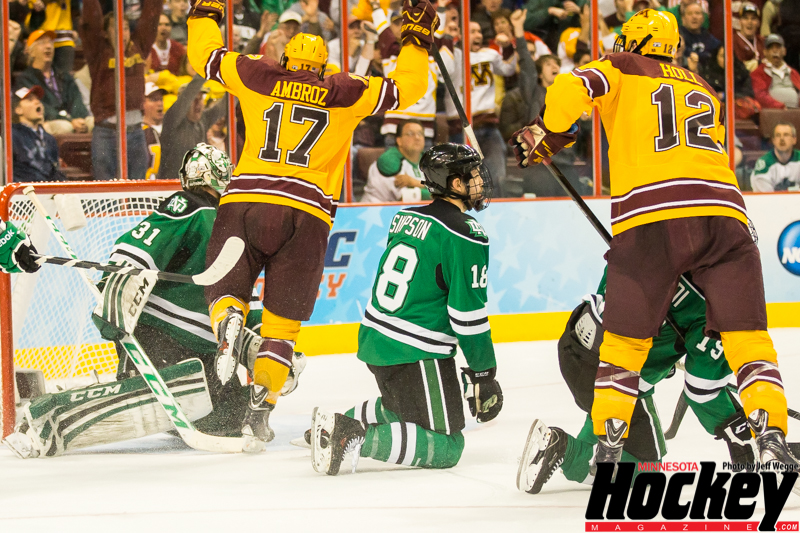 Such was the case on Thursday night as no one could have foreseen Minnesota senior defenseman Justin Holl scoring his first goal of the season, shorthanded mind you, with 0.6 seconds remaining to defeat UND 2-1 in the Frozen Four semifinals at the Wells Fargo Center in Philadelphia.

“No better time for Justin to score his first goal of the season than tonight,” Minnesota coach Don Lucia said. “But that’s our team. We haven’t relied on any one guy. A new guy has to step forward each and every night.”

As the final seconds of regulation ticked down and the Gophers shorthanded, Holl carried the puck through the neutral zone and fed it to Kyle Rau who carried it across the North Dakota blue line. With time running out, Holl chose to jump into the play offensively and, when Rau’s shot deflected off of UND’s Jordan Schmaltz, the puck found its way to his stick and his shot through a screen slid just inside the right post and the on-ice bedlam ensued … for a moment.

An officials’ review was required to verify the puck crossed the line before time expired, which it did, and the celebration was on again.

”It’s a great feeling, but it doesn’t mean anything if we don’t do well on Saturday,” Holl said. “So we’re looking ahead to Saturday and we’re excited for that game.”

Holl’s defensive partner Brady Skjei could not be happier for him.

“He’s one of the biggest team guys we have on our team,” Skjei said. “That’s his first goal of the season, which is crazy because he’s been playing so well. I think he saved it for a good time.”

Rau assisted on both goals adding to his team-leading points (39) and assist (25) totals and goaltender Adam Wilcox was spectacular in making 36 saves and raising his record to 26-5-6 on the season.

“We really had to be good defensively and when you’ve got Wilcox in goal, you can give up a couple and he really stood on his head tonight,” captain Nate Condon said. “We don’t go anywhere without Adam.”

“Adam made some critical saves, like he always does,” Lucia said. “Like I’ve said most of the year, we’re a good team with a great goalie. Adam gives us a chance to win and he certainly did tonight”

Though their bitter rivalry was lost after both teams departed the WCHA after last season for “greener pastures”, it was allowed to briefly rekindle for this one-night-only engagement with each team’s season on the line and an opportunity to play for a national title at stake.

The score was 0-0 through two and a half periods until Minnesota’s Sam Warning scored his 13th of the season, backhanding a Rau rebound behind UND goaltender Zane Gothberg, who finished with 26 saves, to break a scoreless tie at 10:51 of the third period. But North Dakota’s Connor Gaarder answered just 32 seconds later to knot the game once again.

Gaarder drove hard to the net from the left side, getting off a backhand shot Wilcox stopped but could not control. As he headed behind the Minnesota goal, the Edina native reached up with his forehand and batted the puck out of midair past Wilcox for his ninth of the year and third of the postseason.

With time winding down in a tie game and the certainty of overtime growing, Gopher defenseman Mike Reilly was called for holding with just 1:39 to play putting UND on a power play for potentially the rest of regulation and into overtime. Holl’s heroics took care of all that.

The Gophers move on to face Union in the national title game on Saturday night at 6:30 pm on ESPN. The Dutchmen beat Boston College 5-4 earlier in the evening. The championship game will be the fourth meeting all-time between Union and Minnesota. The Gophers hold a 2-1 advantage in the series.

“That was the goal at the beginning of the year, to be playing at the end of the season,” Condon said. “We’ve realized that goal but I don’t think anyone comes here to lose.”

Minnesota is making its first championship appearance since 2003 and 12th title game appearance overall. The Gophers’ 2003 national crown was their most recent.