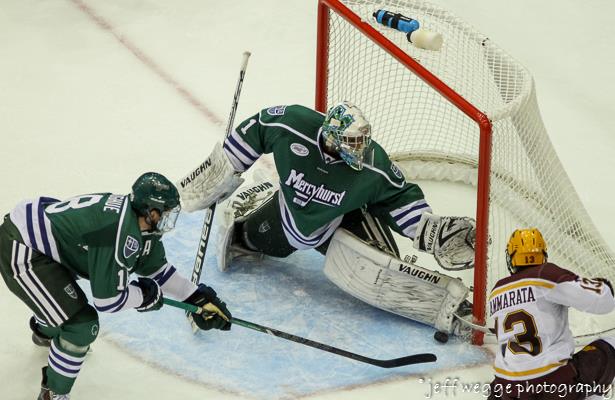 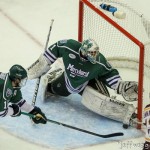 Minnesota certainly put the golden in Golden Gophers Friday night. The boys in maroon and gold handily dismantled Mercyhurst, taking down the Lakers 6-0 in front of 9,196 as part of the Icebreaker Tournament at Mariucci Arena. The win advances Minnesota to the tournament’s championship game against New Hampshire at 7 p.m. on Saturday.

Offense and speed were a strong point of Minnesota’s game all night with 10 different Gophers (six different scorers) working for the six goals.

“I think we’re deeper than we’ve ever been,” Minnesota coach Don Lucia said. “Last year I thought we were a little thin on some lines.

“I think you’ll see that all year … We won’t have one or two guys getting all the points it will be more spread out.”

It didn’t take too long for Minnesota to show its offensive prowess, pressuring Mercyhurst goaltender Jordan Tibbett and his defense right away. Getting that first-season-goal monkey off his back, Kyle Rau capitalized on the power play for the Gophers at 6:25 of the first period to get Minnesota on the board. Rau positioned himself in front of the net to sweep up the garbage, tapping one in past Tibbett.

Just 3:37 into the second period Seth Ambroz notched one for the highlight reel on an unassisted —well technically an assist to himself—goal. Ambroz came in hard on the right side and sent one sailing off the cross bar but managed to get his own rebound and backhanded it in off Tibbett to make it a 2-0 Gopher lead after review.

Shots kept hailing on Tibbett for the rest of the period with Minnesota outshooting Mercyhurst 20-5 in the middle frame alone. At 11:52 Sam Warning got a tally in the goal column, another reviewed goal, as he narrowly slipped the puck over the goal line, riding the red but enough to count it for a 3-0 score. Rau picked up the assist on the goal. 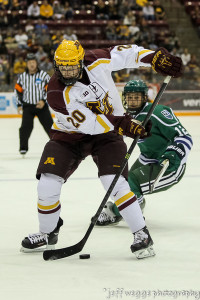 Roughly four minutes later on the power play, Justin Kloos took a beauty of a pass from Nate Condon across the ice and put it top shelf to widen the gap to four.

Just past the mid-point of a quieter third period, more Gophers found their way onto the score sheet to increase the lead to five. Mike Reilly skated in from the point and found the puck in front for a one-timer to the back of the net with 8:37 left to go in the game. Hudson Fasching and Warning picked up the assists.

Minnesota wasn’t quite done, as Michael Brodzinski earned his first collegiate goal with a shot from the left circle that powered past Tibbett to make it 6-0 at 18:41. Warning and Rau added to their point totals on the night with the assists.

With three juniors notching the first three goals then mixing in some youth, Warning said that combination further proves the amount of depth on this year’s team.

“We all have to step up,” said Warning who had three points on the night along with Rau. “Rau stepped up his freshman year and sophomore year so right now we have to have more juniors step up, along with seniors.”

The 6-0 route gave Wilcox his fourth shutout and the Gopher offense posted one of its highest shots on goal outputs, totaling 48 on the night.