Gophers, Bulldogs Shoot It Out For Cup Title 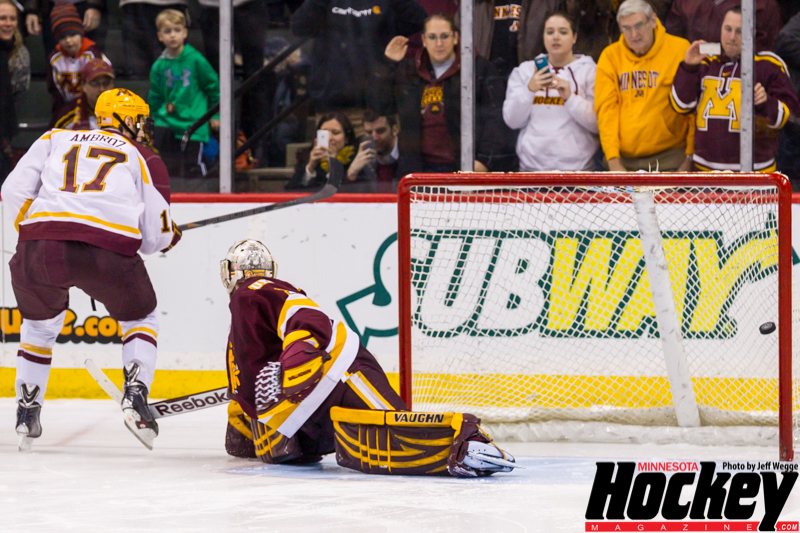 The championship game of the first-ever North Star College Cup gave the 14,518 in attendance everything they could ask for and more from scoring to physicality to mutual disdain for officiating on Saturday night at Xcel Energy Center. Unfortunately, after 65 minutes of non-stop entertainment—reminiscent of vintage WCHA battles gone by—Minnesota and Minnesota-Duluth were forced to settle their 4-4 score via a shootout.

“I’m proud of our guys for finding a way this weekend in both games,” Minnesota coach Don Lucia said. “We played two good teams and both games were a struggle.”

After Minnesota’s Travis Boyd scored Minnesota’s final power-play goal midway through the third period to give the Gophers a 4-3 lead, UMD’s Joe Basaraba scored a dramatic tying goal with just 2:09 remaining in regulation to force overtime.

Minnesota-Duluth coach Scott Sandelin said the game probably deserved to end in a tie but would have preferred a different method of breaking it.

“It’s always tough to lose shootouts, it would have been nice to keep playing,” Sandelin said. “Give [Minnesota] credit, they capitalized on their shootout opportunities but overall I think it was a great game, I’m proud of our team.

“It’d be nice to continue playing, I guess, but we both have shootouts in our league so it’s probably something we need to get used to.”

The Gophers were led by Rau who, in addition to his shootout goal, had a goal and an assist while defenseman Mike Reilly added a pair of assists. Wilcox, named the tournament’s Most Valuable Player, made 38 saves including three in overtime.

Herbert (1-1–2) and Austin Farley (2-0–2) paced the Bulldogs with two points each and Willie Raskob chipped in two assists as well. Bulldog goaltender Austin Crandall stopped 23 Minnesota shots leading up to the shootout.

“It’s tough taking a good team like Minnesota to overtime and I think we played really well,” Farley said. “Coach Sandelin said it was one of our better games and we want to continue to build on that and build momentum going into the second half.”

Much like the consolation game between St. Cloud State and Minnesota State earlier in the day, special teams played a critical role in the outcome as Minnesota score on three of its seven attempts but held the Bulldogs to just one goal in six power-play opportunities.

“It was great to see our power play come alive this weekend,” Lucia said. “It has shown signs here and there in the last month, six weeks, that it had been improving but to get a couple power-play goals each night was obviously huge and certainly the play of Adam [Wilcox] kept us in there when we needed it, especially early in the game.”

Sandelin said his team was not without its chances to win and praised Minnesota’s power play.

“I thought we had some opportunities early in the game where we missed the net, Grade-A opportunities that maybe could have gone in,” Sandelin said. “But their power play was good, they get the big body in front, they got some goals around the net.”

The teams were scoreless for nearly 11 minutes to begin the game before an offensive explosion gave Minnesota-Duluth a lightning-quick 2-1 lead. The teams combined for three goals in 39 seconds on tallies by Rau for Minnesota and Herbert and Farley for UMD, all at even strength. Nate Condon’s goal at 15:51 made it 2-2 heading into the second period.

Although there was no scoring in the second period it was hardly without action as the teams combined for 23 minutes in penalties led by Minnesota defenseman Ben Marshall’s five-minute major penalty for contact to the head and the requisite 10-minute misconduct and game ejection. The game’s physical edge carried through the final period and into overtime with Ambroz and Raskob being assessed boarding penalties late in regulation and in overtime, respectively.

“There was a lot of jaw-jacking between both teams, everyone’s into it, the crowd was into it, things went back and forth sot it was a lot of fun for me,” Ambroz said. “It kind of felt like a good playoff atmosphere and that’s what it’s going to be like at the end of the year.”

Lucia, too, felt the competitiveness of the game benefits his team in the long run.

“The guys I think got a little bit more invested in the game as we went along, more blocked shots, more body contact and it was just  good hard-fought game, a good hard-fought weekend which was good for our team, we needed it,” Lucia said. “Games like this, weekends like this make you better.”