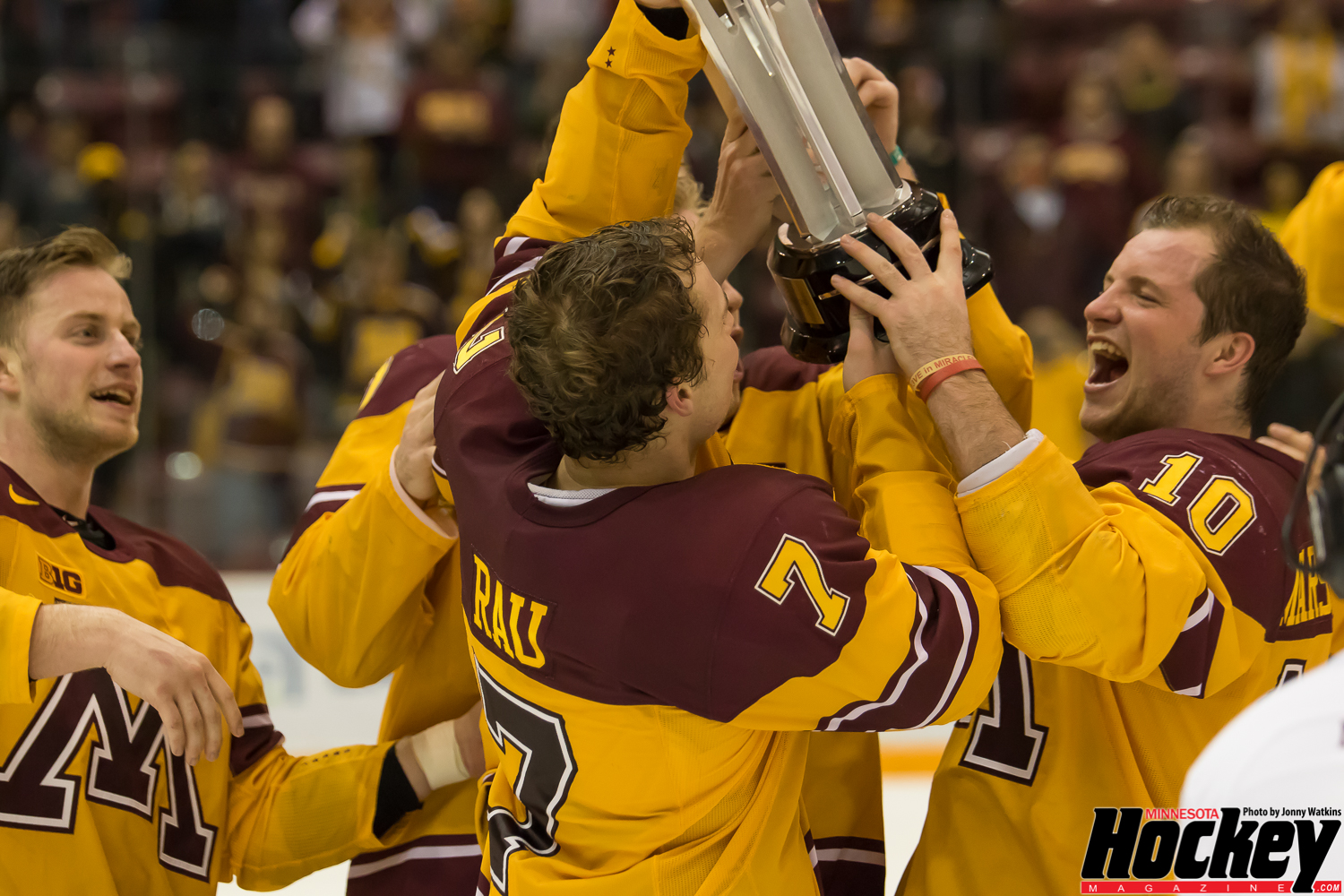 Minneapolis — A series split in Michigan opened the door for the Gophers fourth consecutive regular season title, and Minnesota swept their way right on through with 5-0 and 6-2 wins over Penn State.

Minnesota fell behind early in the first period when one of their former players Max Gardiner started off the scoring for Penn State by tipping in a shot from Zach Saar. The Gophers answered with two goals from Seth Ambroz and Hudson Fasching 20 seconds apart at the end of the period, and then held on after their four goal second period.

The win capped off a February and March turnaround that saw the team finish the season by winning nine of their last 12 games.

“Two months ago, who would have thought we’d be standing here,” said Rau. “I’m really proud of the guys and I think we’ve really grown as a hockey team catching our stride at the right time of the year.”

The Gophers started out the season as Big Ten favorites and the top-ranked team in both the USCHO.com and USA Today polls. The Gophers held onto that ranking through the first six weeks of the season, but then a few losses in November started Minnesota’s fall. The team then struggled through a 3-5-2 January stint that sent them tumbling out of the college hockey polls and onto the PairWise Ranking bubble.

“It’s easy to point fingers and stuff like that,” Ambroz said. “I think as we realized we still have the ability to reach all the goals we want, we finally came together here later in the season and able to play we are consistently.”

Rau attributed the losses to turnovers and bad rush sorting, but said his team has improved in those areas and can now count on them as strengths. They’ll certainly need to continue their strong play through at least Friday night.

The Gophers held their ground as the No. 12 team in the PairWise Ranking after Saturday’s games. The NCAA gives automatic bids to six conferences post-season tournament champions on Selection Sunday. Teams need to be in the top ten to assure themselves a post-season bid, but traditionally getting into the top 13 is considered safe.

“It was great we won the Big Ten, but we want to keep playing and had we not won tonight it would have dropped us to maybe 17 or 18 [in the PairWise] and now you’re forced to win the Big Ten Championship to get a bid,” said Lucia “There is still work to be done obviously, we’ve never won the playoff title with this group.”

While the challenge of a Big Ten Tournament title is ahead, Minnesota needs to at least win Friday to avoid sitting on the bubble come next Sunday. As the top seed for the Big Ten Tournament at Detroit’s Joe Louis Arena, Minnesota will play the winner of fourth-seeded Penn State versus the fifth seed, Ohio State, on Friday at 3:30 CT. Michigan State locked up the second seed and will play the winner of third-seeded Michigan against the sixth seed, Wisconsin, on Friday at 7:00 CT.

The winner then advances to the championship game on Saturday night at 7:00 CT and all the games will be covered by the Big Ten Network.