Gophers Climb Out of Early Hole to Down UMD 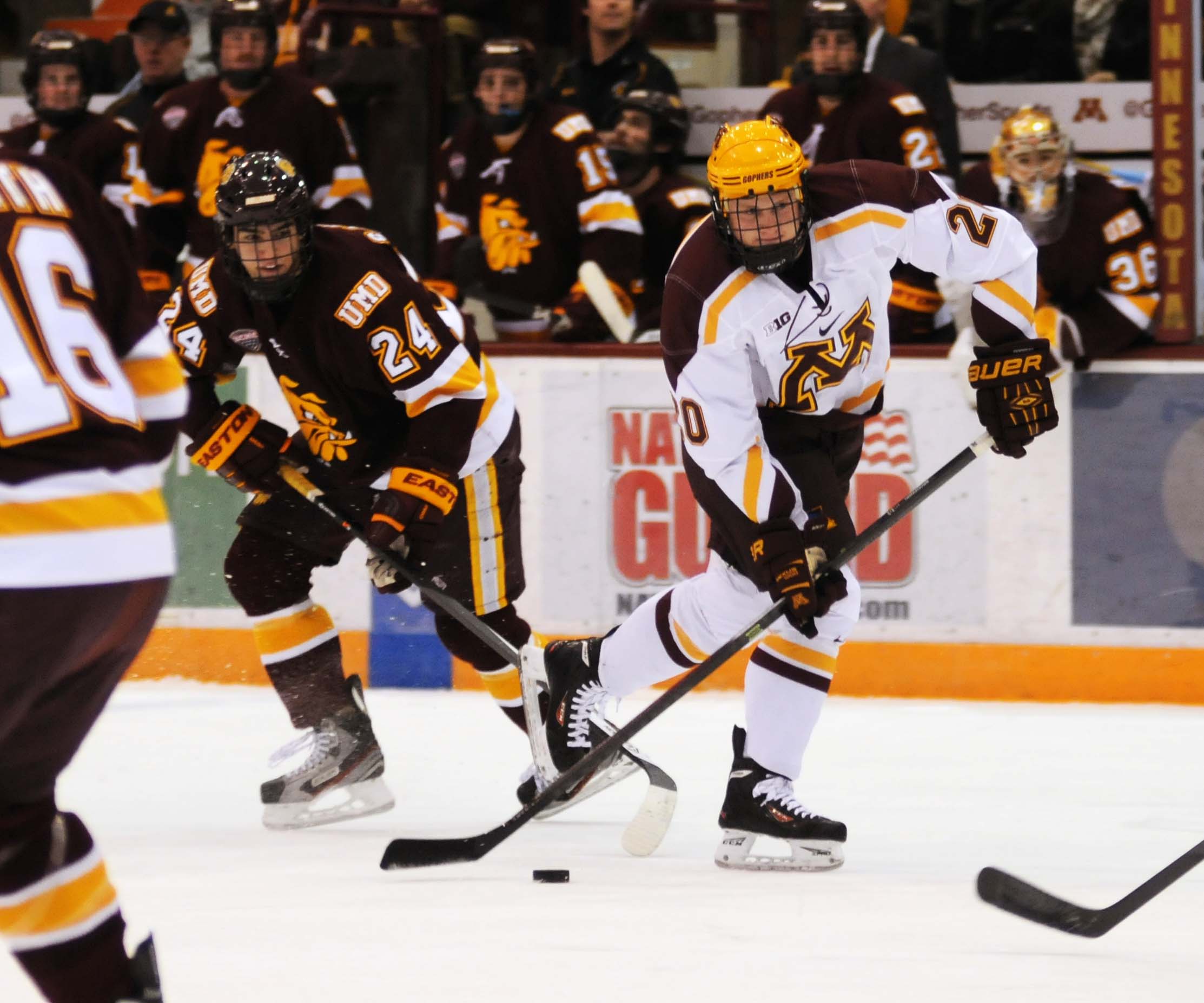 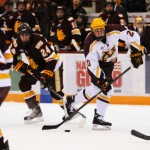 Featured Image:
Freshman Michael Brodzinski had a goal and an assist in Minnesota’s 6-1 win over UMD on Friday, Nov. 22, at Mariucci Arena. (MHM Photo: Jordan Doffing)

Minnesota fell behind early but scored six unanswered in Mariucci Arena’s maroon and gold filled rink and skated away with a 6-1 victory over in-state rival Minnesota-Duluth, earning the No. 1 Gophers their fourth straight win.

“I thought (UMD) came out had a great surge to start the game, probably fortunate we were only down one,” said Gopher head coach Don Lucia. “But we got that first one and it got us going a bit.”

Adam Wilcox was one goal away from a shutout, a fairly soft goal that slipped past him on a loose rebound early in the opening frame as White Bear Lake native Charlie Sampair picked up a loose puck right in front of the goal line to easily slip it past Wilcox. But it was the only one that got past the sophomore netminder who had a career-high 36 saves.

“It was a tough bounce I didn’t see right away but after that we responded well, got three goals in a short time span so we did a good job after that,” said Wilcox. “It was a tough game, UMD is a good team, I don’t think the score really showed the game there.”

“(Adam) was good and I think we relied on him a bit too much tonight,” Lucia said. “So we have to tighten things up, especially for Sunday, but Adam was good; he was on top.”

Within three minutes Minnesota tacked on three goals as the first period neared an end and didn’t let off the throttle, taking it top shelf for three of the six goals and surging past the Bulldogs for the final tally in the opening game of the series.

A night off tomorrow for the Gopher football team’s Axe Battle with Wisconsin before the two teams meet again at 4 p.m. on Sunday.

Keeping it spread out: The Gophers’ six goals came from six different players as Minnesota kept with its theme of multiple scorers. A.J. Michaelson picked up his first of the season and Kyle Rau finally got his second after a decline in scoring output. Tom Serratore, Justin Kloos, Travis Boyd and Mike Brodzinski also tallied

“The Boyd-Serratore- (Seth) Amrboz line was great,” said Lucia. “Our team tonight had six different guys score goals and that’s our team, that’s the way it has to be. When we get the good contribution, you know A.J. (Michaelson) scored to his first goal, he earned the right to get back in (the lineup) so it’s nice to see guys have a good week and get rewarded.”

Sin Bin Time: A total of 16 penalties were called throughout the game, the Gophers going on the penalty kill seven times. Minnesota managed to kill off all seven of the Bulldogs power-play opportunities, an area Lucia said he is seeing some growth.

“We’re getting better,” said Lucia. “You’re best penalty killer’s always your goaltender but we watched our shots. As far as I’m concerned we gave them too many opportunities, we have to be more disciplined Sunday.”

It’s Been Awhile: The last time Minnesota and Minnesota-Duluth met in a non-conference game was 1965. The Gophers wrap up non-conference play this weekend before entering its first season of Big Ten competition, opening B1G play next weekend with familiar foe Wisconsin.

“It might wane as the years go on because conference games take added importance,” said Lucia. “But it’s important, it’s something we talked about, we gotta win in-state games and we’re 5-0 in those games and that’s important to us.”