Far From A Classic 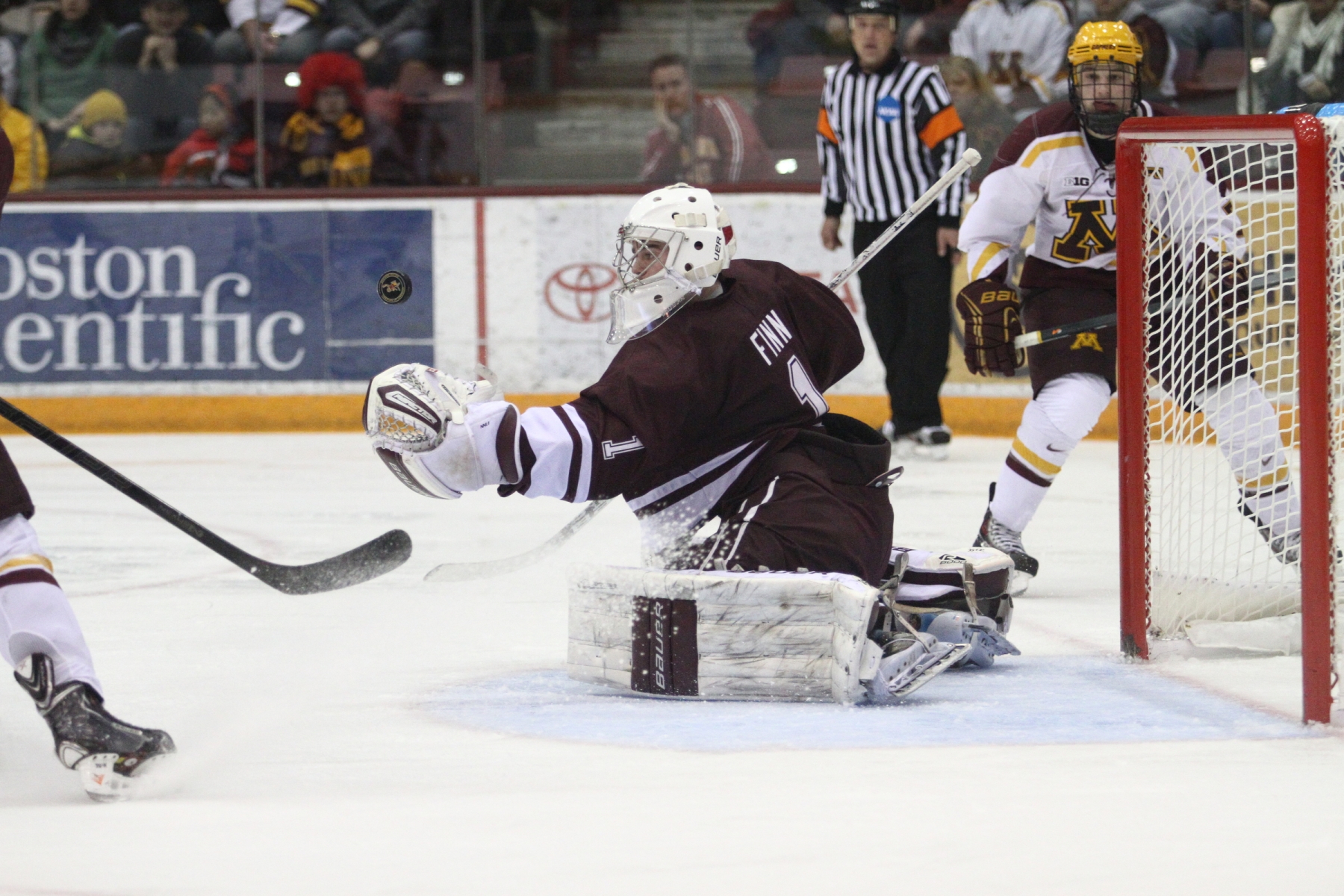 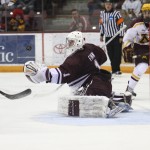 Featured Image:
Colgate goaltender Charlie Finn watches a Minnesota shot in the third period at Mariucci Arena on Friday, January 4, 2014, in the Raiders’ 3-2 shootout win over the Gophers at the Mariucci Classic.
(COPYRIGHT: Ryan Coleman, d3photography.com)

Twenty-six days can be a long time for a mid-season break. Maybe too long, as made apparent by a lifeless University of Minnesota Golden Gopher team Friday night.

The Gophers opened up 2014 as hosts of the Mariucci Classic, but didn’t retain their status as No.1 in the tournament with a 2-2 tie and eventual shootout loss to Colgate.

“We were just off, plain and simple,” said Gopher assistant coach Mike Guentzel.

Without Don Lucia, Brady Skjei and Hudson Fasching — who were on their way home after an early exit for the U.S. National Junior Team in the International Ice Hockey Federation’s World Junior Championships held in Malmo, Sweden — Guentzel took the reins and shook up the lines.

But while the lines appeared to work well together at first, something was off. Minnesota came out slow and struggled with smart plays. Maybe it was the holiday break lagging them down, but the energy was completely absent from the maroon and gold squad.

“Yeah, I really don’t know,”said Guentzel of his team’s struggles. “It’s tough, but you make the best of it. We have no excuses there. Whether it’s coaching or not scoring, being short-handed, there is no excuse for it. (Colgate) is a good team.”

Minnesota tested Colgate freshman netminder Charlie Finn early on, out shooting the Raiders 13-6 through the scoreless first period.. Minnesota sparked a flame in the middle of the second frame as Gopher freshman defenseman Michael Brodzinski continued to prove himself as an offensive threat. Brodzinski sailed one from just inside the blue line that skipped past Finn for a 1-0 Minnesota lead just 2:25 into the period.

Colgate responded with two of their own including Joe Wilson’s goal at 8:29 which he slipped between the pads of Adam Wilcox after the Gopher goaltender mistakenly assumed he had frozen the puck. Wilcox finished with 27 saves and appeared to be fighting the puck all night.

Just under seven minutes later the Raiders capitalized on a poorly executed Minnesota line change by turning a Nate Condon neutral-zone turnover into an easy 2-on-0 for Darcy Murphy and Daniel Gentzler with Murphy tallying for a 2-1 Colgate lead at the end of two.

“Ultimately, the bottom line tonight is that giving up the puck between the blue lines in the neutral zone, is going to cost you the hockey game,” said Guentzel.

And that go-ahead goal was a big turning point for Colgate according to Finn.

“I think just pulling in front of them for that lead against a No.1 team was a lot,” said Finn, who ended the night with 36 saves. “To do that here, obviously we’ve never played in front of a crowd like this, gave us that confidence to finish this game.”

The Gophers didn’t make it easy for the Raiders, however, as Travis Boyd slapped one in from the left side on the power play midway through the third for the tying goal. The final minutes were the most electric of the night, the announced crowd of 9,520 included. Each team had opportunities, but both goaltenders did their part to force overtime.

Colgate held an edge in the extra stanza but ultimately the teams were going to let a shootout decide.

What was supposed to be a prime match-up between the No. 1 and No. 2 teams in the nation in Minnesota and Ferris State on Saturday is no more. Colgate and Ferris State now play for the championship at 4 p.m. while the Gophers will face RPI at 7 p.m. consolation title.

Kyle Rau tallied his 100th career point on the assist to Boyd. He joins an elite class of 80 Gophers to have reached the century mark. Erik Haula, now in the Minnesota Wild system, was the last Gopher to achieve the honor.

“It’s pretty cool,” said Rau. “I’m disappointed in the loss but that’s a positive take away.”