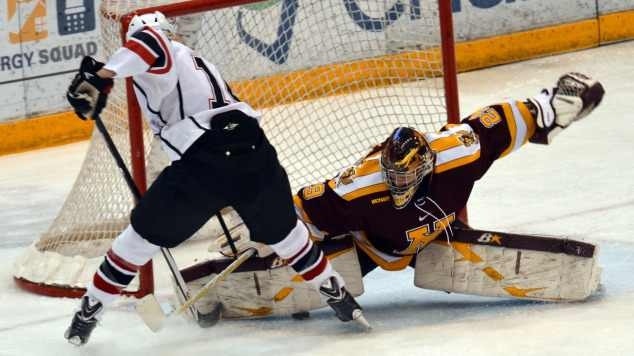 The Gophers held a 3-0 lead after two periods, but St. Cloud State cut the lead to two early in the third. However, senior Kelly Terry (Whitby, Ont.) scored her team-leading eighth goal of the season to seal the win for the Maroon and Gold.

“It was a great team win tonight,” head coach Brad Frost said. “We outshot St. Cloud fairly heavily and applied some good pressure, really used our speed on the big ice and came away with the win. It was nice to see Kelsey Cline get her first goal as a Gopher.”

Senior Sarah Davis (Paradise, N.L.) gave the Gophers a 1-0 lead at the 5:43 mark of the first period. Sophomore Milica McMillen (St. Paul, Minn.) fired a shot through traffic from the point, and senior Bethany Brausen (Little Canada, Minn.) got a stick on it before Davis poked it past SCSU goaltender Julie Friend.

Cline score her first career goal at the 14:26 mark of the second period when junior Rachel Ramsey (Chanhassen, Minn.) found her in the slot, and the freshman one-timed the puck past Friend. Junior Rachael Bona (Coon Rapids, Minn.) netted her seventh goal of the season just 34 seconds later to make it 3-0.

“Scoring a couple quick goals there at the end of the second really put us in a good position to come into the third period and put the game away,” Frost said.

St. Cloud State (1-7-3, 1-6-2-1 WCHA) cut the Gophers’ lead to 3-1 at the 1:07 mark of the third period when Payge Pena buried a loose puck on the weak side. However, senior Kelly Terry (Whitby, Ont.) scored her team-best eighth goal of the season on a solo effort at 3:51, moving the puck through the face-off circle and beating Friend up high to seal the win.

The Gophers were 0-for-2 on the power-play while holding the Huskies scoreless on their lone opportunity with the man advantage.

Bemidji State came out playing well in the first period and was in Ohio State’s defensive zone for most of the period. The Beavers had an 11-6 shot advantage. BSU also held its own on defense as it killed off two Ohio State power plays.

After a scoreless first frame, the offense opened up for both teams in the second stanza. The Buckeyes got things started with a goal by Kayla Sullivan with 4:43 gone in the period. The Beavers would answer back with three consecutive goals. The first was of the shorthanded variety by Tess Dusik (F, Sr., Oak Bluff, Manitoba). It was BSU’s third shorthanded goal of the season after having none last season. The second goal was the second of the season for Stephanie Anderson (F, R-So.,North St. Paul, Minn.) at the 12:04 mark in the period. The third and final goal of the frame came off of the stick of Hanna Moher (F, So., Milton, Ontario) on a BSU powerplay.

Trailing 3-1 entering the final period, the Buckeyes got a goal by Sara Schmitt at the 3:22 mark in the period.

The Beavers were able to hold on, getting 14 saves from goaltender Brittni Mowat (G, Fr., Glenboro, Manitoba) in the final stanza to seal the victory.

BSU played its best game of the conference season and it showed. It was perfect in killing all four OSU power-play opportunities. It also had nine different players register points in the game.

Mowat picked up her fourth victory of the season in between the pipes for the Beavers and first in conference play, pushing her record to 4-5-1.

Both Minnesota-Duluth and Minnesota State are idle this weekend.