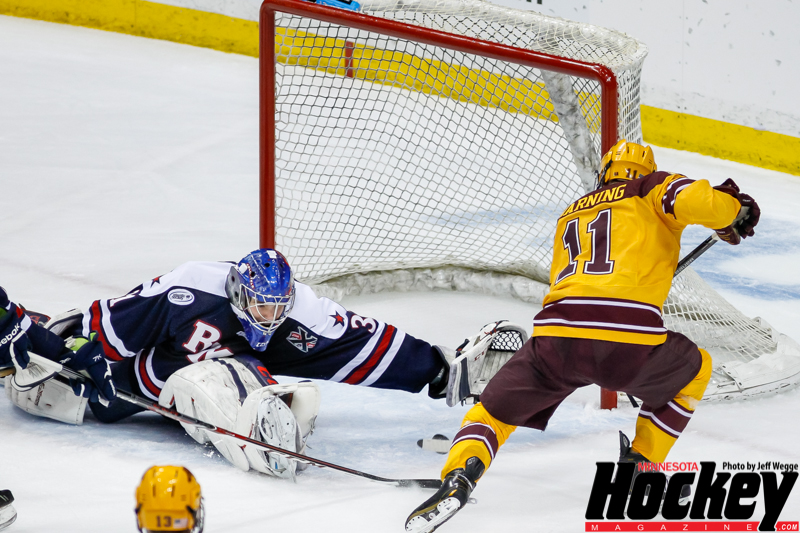 Robert Morris goaltender Dalton Izyk makes one of his 42 saves against Minnesota’s Sam Warning in the Gophers’ 7-3 win over the Colonials on Saturday at Xcel Energy Center. (MHM Photo / Jeff Wegge)

Nate Condon made his 100th career point last a while.

Condon, a senior captain for the Minnesota Golden Gophers, fired a slap shot across both blue lines into an empty net.  It sealed a 7-3 NCAA tournament victory over Robert Morris on Saturday at the Xcel Energy Center while hitting the century mark for his career.

“We were short-handed, so I just wanted to throw it down the ice, and thankfully it went in,” Condon said.

The empty netter was the Wausau, Wis. native’s second goal of the game after sparking a three-goal onslaught by the Gophers in 3:20 seconds late in the first period to establish the lead. Condon’s first goal with 3:47 left in the first period was an end-to-end rush he finished by beating Colonials’ goaltender Dalton Izyk with a wrist shot inside the right post.

“Our team has been great this year when scoring the first goal,” Condon said.  “I just came down the ice and shot it through a screen and kind put it [the puck] in the lower corner.”

Michael Brodzinski assisted on Condon’s goal and then scored the second goal of the game on a slap shot from the high slot just 1:37 later. Justin Kloos made it 3-0 Gophers with only 16.8 seconds on remaining the clock.

“Nate’s goal relaxed everybody a little bit,” Minnesota coach Don Lucia said.  “And we seized control of the game, and that’s the way we need to play.”

Kyle Rau boosted the led to 4-0 midway through the second period but the Atlantic Hockey Association champions battled back on goals by Cody Wydo and Zac Lynch, the second of which coming with 43.5 seconds left in the period to make it 4-2 heading into the third.

“At this time of the year, no one is going to give up because it’s their season on the line,” Gophers co-captain Kyle Rau said.  “We need to take that into account and use that for [Sunday] because we know that no one is just going to fold over for us.”

With Minnesota’s Travis Boyd sent off for elbowing at 16:26, Colonials coach Derek Schooley pulled Izyk with about two minutes to go in the game hoping to close the gap during the power play.

Condon, a finance and accounting major, quickly cashed in on the opportunity.  He finished with two goals and played a key role in Kloos’ first-period goal as well.

“Nate is one of those guys that brings it every day,” Lucia said.  “He always practices hard.  He has played a very important role on our team since his freshman year.  He’s a big reason why we’ve had the success we’ve had since he’s been here.”

Gophers’ sophomore defenseman Mike Reilly made the game a football-like score with a shot that blew past Izyk for a 7-3 lead at 18:53.

Minnesota goalie—and Hobey Baker Award candidate—Adam Wilcox stopped 22 shots, including a couple of key ones in the first two periods.  He made a save on a deflection in the first period to preserve a scoreless tie and thwarted a Colonials’ breakaway attempt in the second.

With the win, the Gophers will take on St. Cloud State for the NCAA West Regional championship on Sunday at 6:30 p.m.