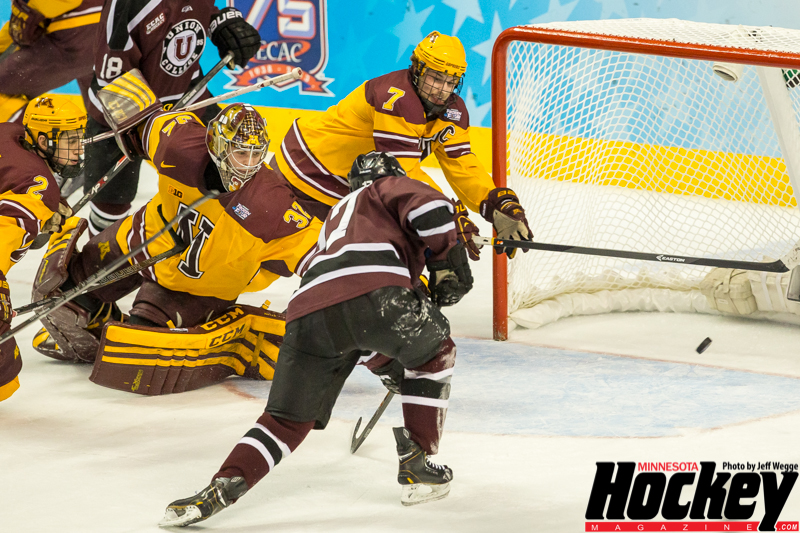 PHILADELPHIA — There are some times in which the inevitability of sports is painful. Nowhere is that more present that in college sports.

This weekend I had the pleasure of being able to follow the Gopher Men’s hockey team to the Frozen Four in Philadelphia. In fact as I am writing this, I am on a flight with a plane full of Gopher fans who feel pain, mixed with the excitement of what the last four days brought us.

On Thursday we learned that every second of every game counts (or at least they re-learned the lesson after last year’s loss to Yale in the NCAA regional).

The Gophers and North Dakota played for the first time this year, extending a series that almost seemed as if the hockey gods were not able to let it go. The all-time series was close, the post season series was close, heck the last time the two teams had faced each other before that game was a tie.

So it was apt that it should go down to the final second of the game which would send one team to a national title game.

With 0.6 seconds left on the clock Justin Holl scored his only goal of the year, in a way that we are all taught to; throw the puck towards the net and see what will happen. In this case it punched their ticket to the title game, made Holl a folk hero (some even had shirts made up with “0.6” on the front) and put the Gophers on ESPN’s repeated news cycle.

Just 48 hours later, I walked into locker room after the loss to Union in the championship game. Holl’s giggles had morphed into waling, his smile into a painful frown.

You see, in sports, the good never stays good for long and thankfully the bad never does either. But for this young man who had just finished his career and was wandering around the locker room in tears going from teammate to teammate for an embrace, it was especially painful.

He was far from alone.

Captain Nate Condon spoke to me just two days earlier about how this team refused to celebrate the win over North Dakota that much. They were excited for the win but, as he stated, it meant nothing if they didn’t finish the job.

Condon is a natural captain for this team. Not just because he was elected by his peers but because he was born to be. He is stoic, well-spoken and one heck of a hockey player.

He was also the guy who seemed to take this loss the hardest. After the loss to Union he sat motionless at his locker, face red with tears; which you could only see as he occasionally brought it up from being buried in his hands. He never undressed or wiped the sweat away, He just stared, seemingly watching his entire career at the University of Minnesota pass before his eyes.

After a few minutes of gathering himself, he stood up to take questions from the media. Now, Condon is always a great interview with insightful answers wrapped in a pleasant demeanor. But on this night, even he couldn’t hide the terrible feelings inside when asked what he felt they could have done differently tonight:

Condon and Holl are just two players in an entire locker room of disappointed kids. And they are just that … kids.

I know there will be people out there who criticize them and fault them from not playing their best game when on the biggest stage (something they said after their loss to Union) l, but lets please remember that these players are kids.

No matter the round a season ends in, it’s not OK to blast these kids. If you believe that you have the right to criticize an 18-23 year old kid because you’re a bleeding heart fan, or you’ve had season tickets for years, think again.

They are playing because they love the game and I assure you that no matter how badly you think you feel, they have it worse.

It is interesting though, losses always seem to catch you off guard. I mean, there is literally and statistically just as good a chance of winning as there is of losing.

Yet we are never prepared for the let- down, not as participants in the sport, or as fans of it.