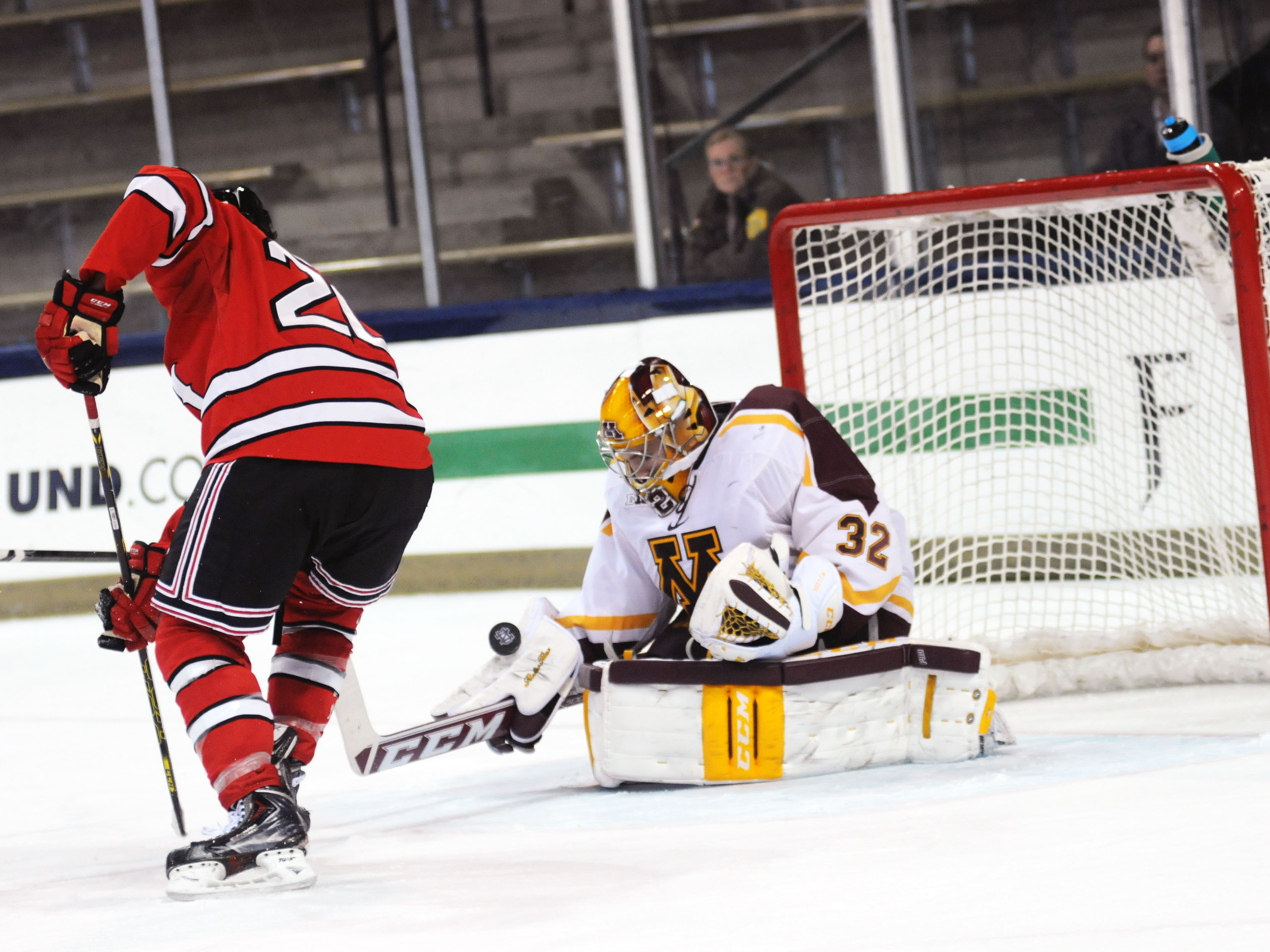 SOUTH BEND, Ind. – Minnesota looked like an entirely different team in its shutout of Rensselaer Sunday afternoon than on Friday against Minnesota-Duluth. Playing nearly flawless hockey, the Gophers blanked the Engineers 3-0 in the Ice Breaker Championship at the Compton Family Ice Arena.

The Minnesota offense fired 34 shots while holding the Engineers to 22 in winning its second consecutive Ice Breaker title and third overall.

“I thought we were much better today in how we played and I thought we played the game the right way today,” Minnesota coach Don Lucia said. “We held the puck better, got some pucks down low in the offensive zone and we spread the rink a little better, too.”

The Gophers came out strong Friday against the Bulldogs, but tapered off late in the game to let Minnesota-Duluth almost make a comeback. Sunday was a different story that saw the Minnesota defense limit second-chance rebound shots to almost zero.

“Their D-core just skates so well that when we’d get a push, they’d limit it to one chance and then they’d get the puck,” Rensselaer coach Seth Appert said. “It’s usually the second or third chances that get it in the net, not the first ones – especially when you have a goalie of Wilcox’s caliber.”

The few times the Gopher defense lapsed in judgment Adam Wilcox came up big. RPI started laying down thick pressure several times late in the second period and early in the third, but Wilcox kept the door shut to keep the Engineers off of the score sheet.

“We did a good job of boxing out and when I was able to get the puck and cover it there wasn’t anyone in my face, especially after the whistle with not letting them get close to me,” Wilcox said. “Sometimes that can cause a little discomfort for a goalie but our structure in front of the goalie was second to none tonight.”

Minnesota scored one goal per period with Seth Ambroz starting the scoring off with just over five minutes left in the first period. Tournament Most Valuable Player Hudson Fasching then scored just over 90 seconds into the second period to extend the Gophers’ lead to 2-0. Connor Reilly netted Minnesota’s third and final goal just three seconds into a power-play near the midway point of the third period.

“We’ve got a lot of guys with speed on our team and we knew that was going to be an advantage for us today,” Fasching said. “I think the speed on our defensive end was big because they got a lot of chip-outs and they were racing to get back.”

After playing just two games last season, RPI goalie Jason Kasdorf played great over the course of the Ice Breaker weekend. It took a lot of grit and getting bodies in front of the net to get anything past him in either game.

“I think to come out here against two top-tier programs and to perform the way the he did solidifies in the back of his mind that he’s back,” Appert said of Karsdorf. “It was a good mental hurtle to get over.”

The Gophers (2-0) will have some time off before their next series when they host the Bemidji State Beavers, Oct. 24_25.