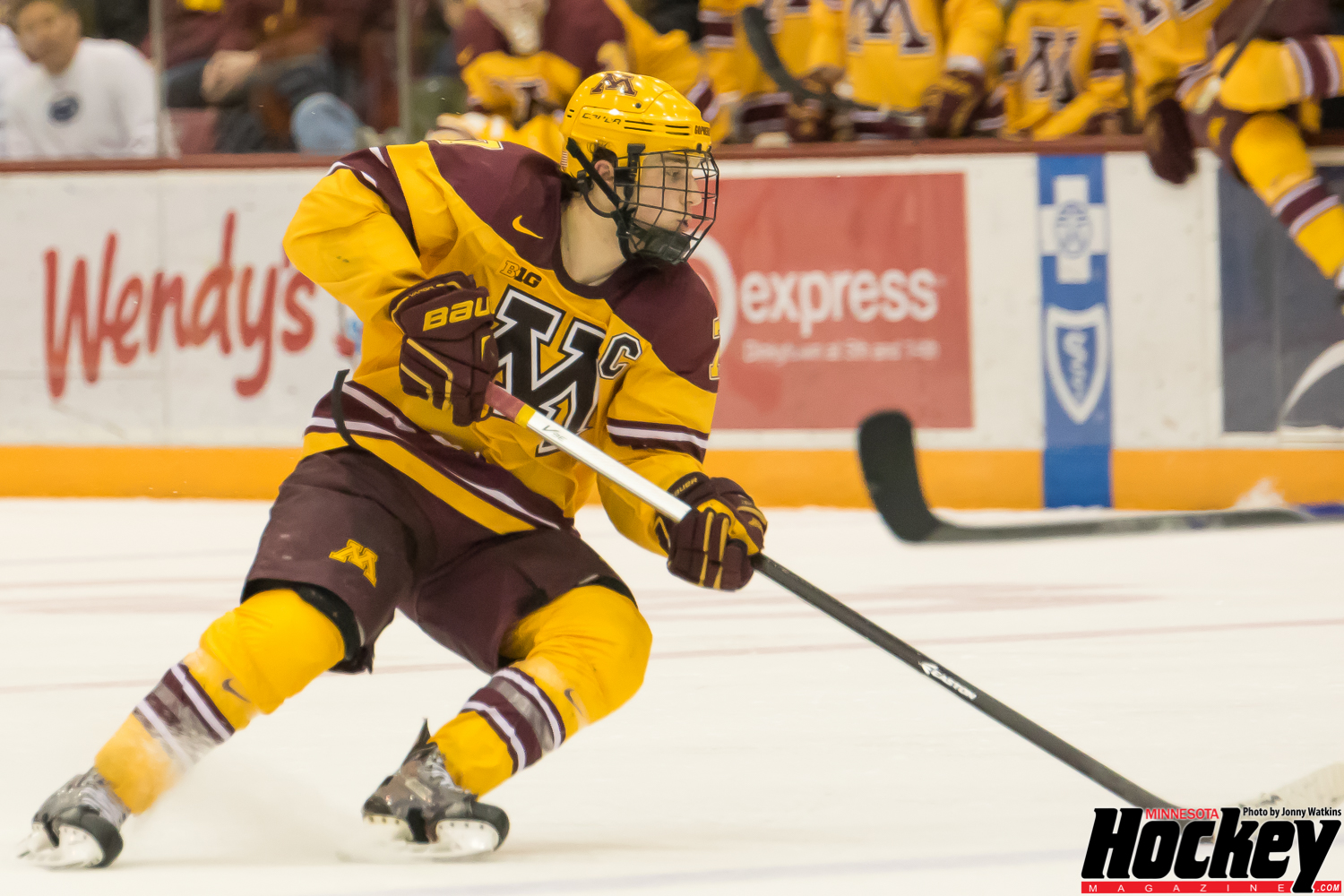 Minnesota coach Don Lucia brushed off all bracketolgy talk this month off by saying if his team wins, then all of that stuff doesn’t matter. His team did just that, securing an NCAA Tournament bid as an auto qualifier by winning Big Ten Tournament Title 4-2 over Michigan in front of 6,355 at Joe Louis Arena.

Minnesota (23-12-3 overall, 12-5-3-0 Big Ten) won its first conference tournament title since 2007 and played well down the stretch going 12-3-1 to propel them into the post-season. Michigan (22-15-0 overall, 12-8-0 Big Ten) finished 19th in the final PairWise, and missed the tournament for the third straight season following up their run of 22 consecutive appearances.

“We knew it was going to be a man’s game. Michigan is an outstanding team,” said Lucia. “Only disappointing thing for me tonight is that they are not going to be in the NCAA Tournament.”

Minnesota played a solid opening 20 minutes, but couldn’t get any pucks past Michigan goaltender Steve Racine despite outshooting the Wolverines 20-7. The Gophers had plenty of jump compared to Michigan who was playing their third game in three nights.

“I thought Steve played really well tonight. You could tell he’s on his game,” said Adam Wilcox. “I thought the mood in the locker room was really good. Even though it was 0 0, the mood was kind of like we were up a goal or two, just because of how we were playing, we knew our whole team was on our game and we were going to eventually get some goals.”

Minnesota did eventually get on the board first, 2:30 into the second, by taking advantage of their third power play opportunity. The Gophers top unit worked the puck below the hash marks and Kyle Rau sent the puck across the front of the net to Travis Boyd on the off wing. While Boyd didn’t get all of the puck, it was enough for the opening goal of the game and his 18th of the season.

Michigan took advantage of its power play opportunities in the second period as well. Zach Hyman collected a puck on the left wing wall, beat three Gophers across the rink, and fired a puck under Adam Wilcox’s glove to even the game 1-1 at 3:56. Alex Kile gave his team a brief 2-1 lead scoring on another power play opportunity with a redirect of a shot that was headed wide into the net at 6:14.

The Gophers tied the game 2-2 10:34 into the second period with the game’s first even strength goal. Leon Bristedt took a hit in the neutral zone from a Michigan defenseman, but the puck got through springing Hudson Fasching and Kyle Rau on a two-on-one rush. Rau moved the puck to Fasching on the right wing, who moved the puck right back to Rau in the middle, and Rau buried his chance to tie the game for his 20th goal of the season.

“We’ve been taught on two and one to pass the puck early,” said Rau. “So I gave it to Fasching right when I get over the blue line. He made a great play. I think we kind of caught the defense pretty open back door.”

Minnesota’s Justin Kloos scored the game-winner 9:29 into the third period on the power play. Kloos skated the puck through the slot, waited to clear a Michigan defender on the ice, changed the angle on Racine after the goalie dropped, and fired the puck into the lower right corner for his 13th goal of the season.

“I think all three of the goals, you kind of had to move to the side and that kind of opened up a few lines,” said Rau. “Any time you play a good goalie, they can only stop the square right on one, but you get it moving, we like our chances. So we did just that and Kloos made a really good play on his goal.”

Boyd added his second empty netter of the weekend from his own zone at 19:38 to ice the game.

Wilcox finished the game with 24 saves and was named the tournament’s most outstanding player.

Minnesota finished the season 10th in the PairWise ranking and awaits to see how the committee will seed the tournament for their 36th NCAA tournament appearance. The Gophers will be the only representative from the Big Ten, but NCHC has six teams in tournament field includes #2 North Dakota, #4 Miami, #5 Denver, #6 Minnesota-Duluth, #9 Nebraska-Omaha, and #12 St. Cloud State. The WCHA also has bids for #1 Minnesota State and #7 Michigan Tech.

“We are just fortunate that we got in this year because you never want to take that for granted, and now we get to play next weekend. That’s always the goal when the year begins is to try to hang a banner. We hung two this week,” said Lucia. “This group of seniors has five in their back pocket, which is pretty darned good, and now we get an opportunity to play in the NCAA. I don’t know where, I don’t know who, but right now, I don’t care.”

He will find out with the rest of us when the selection show airs on Sunday, March 22 at 11 AM CT on ESPNU.