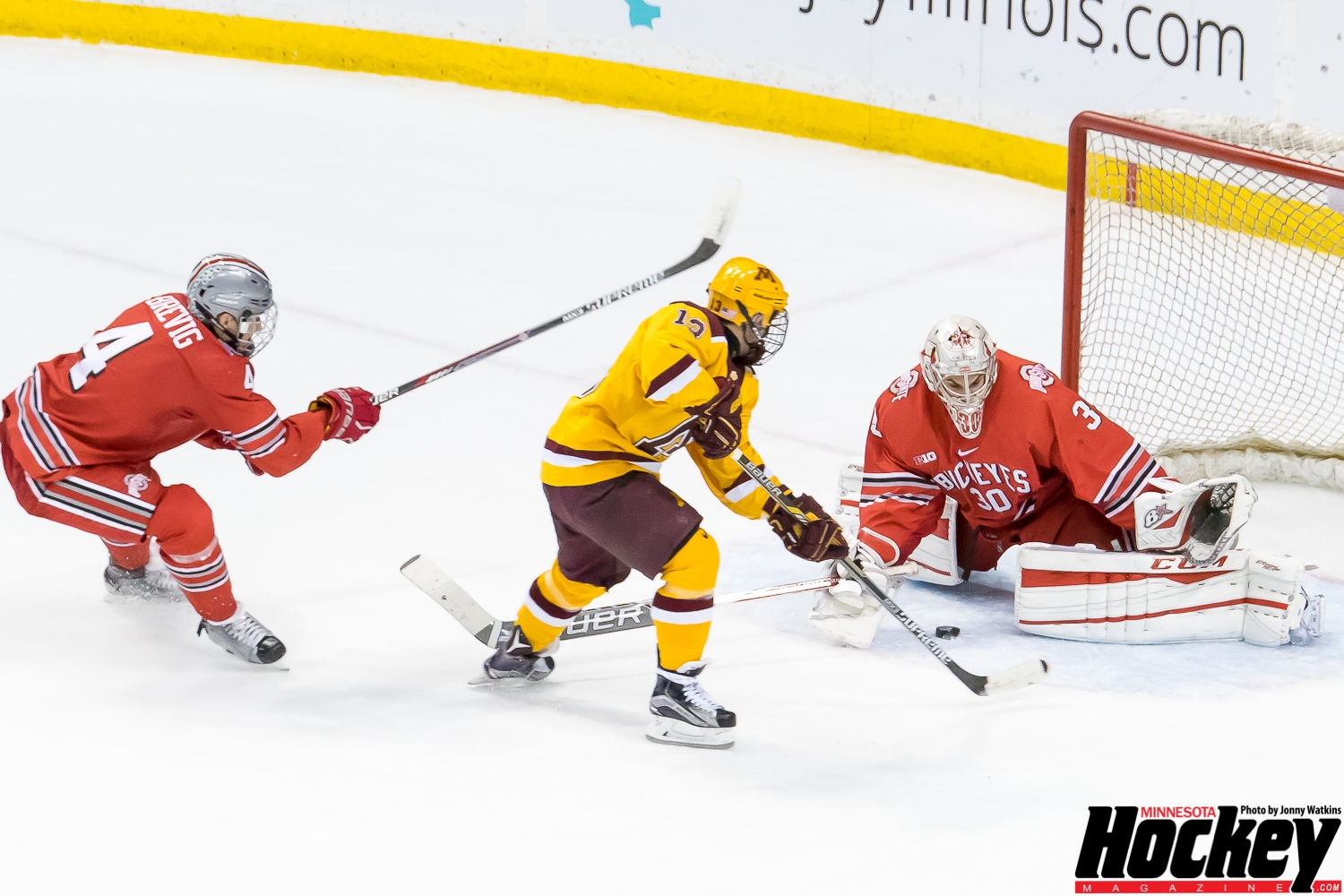 “It took us a while to find the rhythm,” Lucia said. “We needed the one goal to kind of get us going.”

That theory really rang true for the Gophers as the No. 1 seed managed a four-goal third period for a comeback victory over No. 4 seed Ohio State (14-18-4) in the semifinals of the Big Ten Tournament Friday at Xcel Energy Center.

The Minnesota Gophers (20-16-0) propelled themselves to the championship game behind a three-point effort from freshman winger Tyler Sheehy and a two-goal night from junior Taylor Cammarata. Lucia said they usually rely on three main guys for scoring goals, but this game felt different.

“If we were going to win tonight, somebody else was going to have to step forward,” Lucia said. “Guys that maybe haven’t scored on a nightly basis really came through in the clutch.”

Cammarata came into the game with five goals on the season. In the third period Friday, he took about five minutes to add a couple more to his total.

“I thought we dominated the third period,” Cammarata said, who had his first multi-goal game this season.

Sheehy was a big factor in Cammarata’s pair of goals. On the first one, he created a turnover and passed it to Cammarata who was all alone in front and put a laser shot past the goalie. On the next one, Sheehy banked a pass along the boards from his own zone up to Cammarata.

Sheehy got the Gopher goal train chugging 1:36 into the third off a 2-on-1 opportunity. He held the puck into the zone, drove the net, took the shot himself and beat Ohio State goalie Christian Frey on the high glove side.

That opened the floodgates.

“It’s amazing how a goal can just kind of ignite you,” Lucia said.

The players knew what they needed to do, Sheehy said.

“After that (first goal), we were kind of rolling from there,” Sheehy said.

Junior Vinni Lettieri picked a fine time for his seventh goal of the season. With the game tied 1-1, he scored that all-important next goal about four minutes later, putting Minnesota up for good before Cammarata added his pair of goals.

The third period was definitely a turnaround from the first two, as the Gophers were down 1-0 at the 13-minute mark of the first. They weren’t executing, Lucia said, that included a lot of missed passes and pucks bouncing around over sticks.

Minnesota also failed to capitalize on a five-minute major power play in the first period. Ohio State’s Joshua Dakota checked Minnesota freshman winger Ryan Norman from behind and also received a game misconduct penalty. Lucia said after the game that the one hit took both players out of the game.

The Gophers are looking to make it two in a row for Big Ten Tournament titles. They beat Michigan 4-2 in the title game last year.

The two will meet again in the championship game at 7 p.m. Saturday at the X. Michigan, the No. 2 seed and ranked No. 7 nationally, beat Penn State 7-2 in the early semifinal Friday.

Junior defenseman Jake Bischoff played his 100th career game Friday. He had three shots on goal and was a -1.

Minnesota was the only Big Ten team Ohio State did not beat this season.