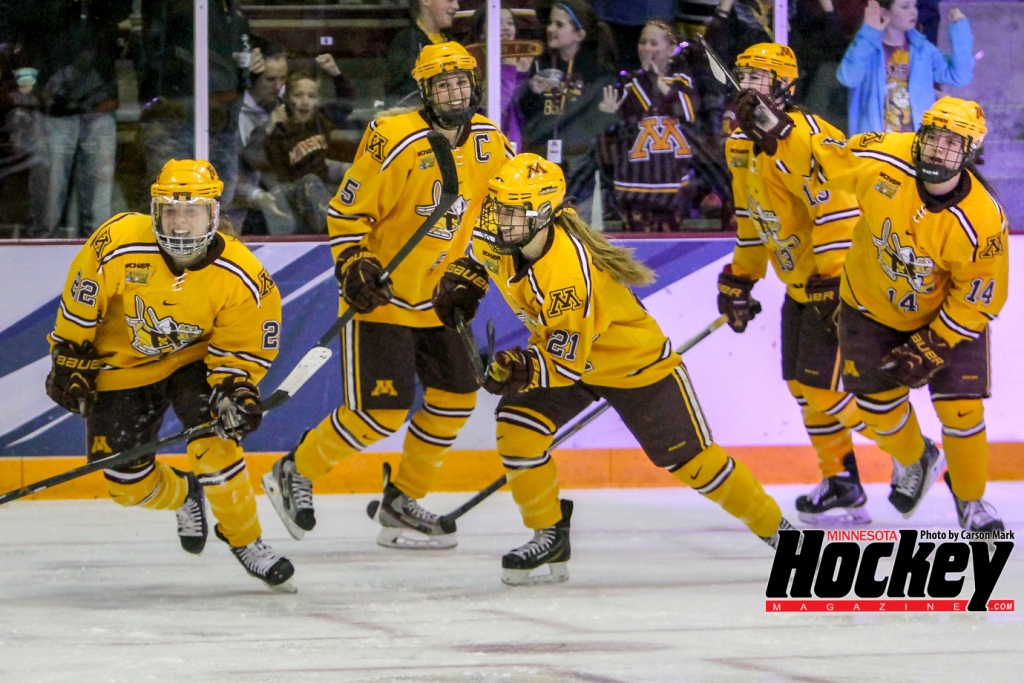 Minneapolis — Backstopped by superb goaltending from Amanda Leveille, the Gophers climbed into the national championship game in women’s hockey for the fourth consecutive year Friday.

Minnesota, which won NCAA titles in 2012 and ’13 before falling in the final a year ago, rallied with three goals within 8 minutes, 1 second of the second period and knocked out Wisconsin 3-1 in the women’s Frozen Four opener in front of 3,400 at Ridder Arena.

For long stretches early on, this looked like Wisconsin’s game. The Badgers built a lopsided early advantage in shots on goal, then grabbed a 1-0 lead in the first minute of the second period.

But that was all Leveille, a 5-foot-7 junior from Kingston, Ontario, would yield.

“We had our opportunities,” Badgers coach Mark Johnson said, “but we didn’t capitalize.”

That was never more evident than late in the second period, when Leveille, with Minnesota leading 2-1, left a tantalizing rebound in the right faceoff circle and Wisconsin center Blayre Turnbull got a bead on it.

Leveille, at the opposite corner of the net for the earlier save, had a long way to travel for Turnbull’s quick shot, but she got there.

“Somehow, she slid across and made that glove save,” Gophers coach Brad Frost said. “And we were able to score shortly after that to go up 3-1. It could have been 2-2 there and they have the momentum; instead it’s 3-1 and we were able to hang on.”

“In the first, Amanda made two or three saves, just back to back to back, to keep it 0-0,” Frost. “That was obviously huge.”

Brandt says she has seen numerous good games from Leveille, but Friday was near perfection.

Wisconsin outshot Minnesota 35-23, including 10-3 in the final period, but Leveille made the key saves to raise her season record to 27-3-3.

“Their elite players, their go-to players, seemed to come up big in the big moments when they needed a boost,” Johnson said.

Goals by Hannah Brandt, Maryanne Menefee and Kelly Pannek erased a 1-0 deficit and allowed Minnesota to extend its season record against Wisconsin to 4-0-1.

None proved bigger than Brandt’s, which came on a rebound 8:53 into the second period to draw Minnesota even.

Until then, the Badgers seemed in control.

“Wisconsin is really, really good,” Frost said. “They’re playing unbelievable hockey, and it took us awhile to get our legs. Once Hannah scored that goal you could just feel the tide turn a little bit.

“They came off the ice and I said, ‘Did you guys hear the crowd?’ They were too involved in the game, but I heard it. It felt like the roof was going to blow off the place. It was just awesome, but it took that goal to really get us going.”

Minnesota, seeded No. 1 entering NCAA play, advanced to the final with a 33-3-4 record while the fourth-seeded Badgers finished with a 29-7-4 mark.