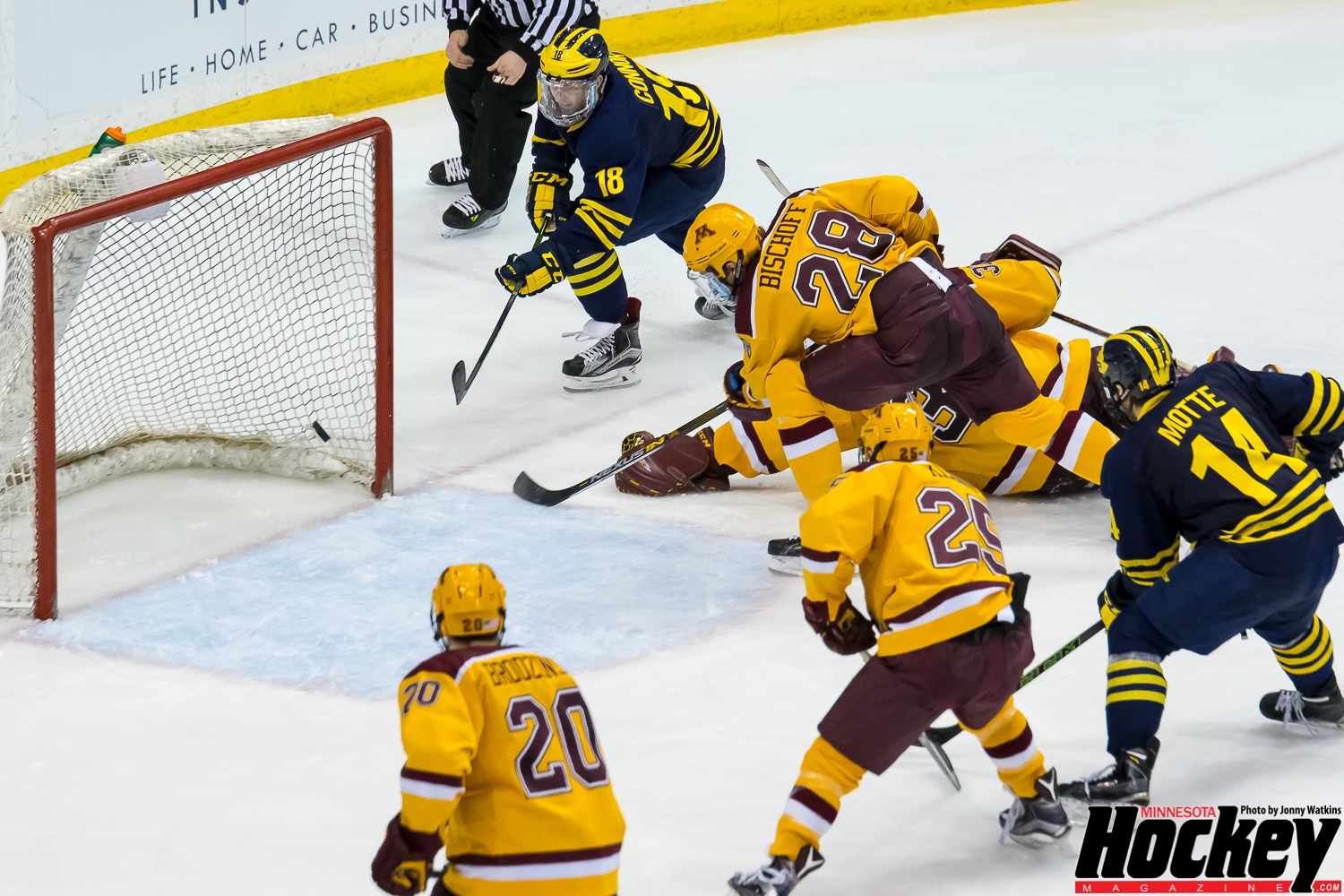 St. Paul – It looked good after 40 minutes. Three unanswered goals for the Minnesota Gophers gave them a shot to repeat as Big Ten Tournament champions.

Instead, their season ended as the Gophers failed to qualify for the NCAA tournament for the first time since 2011.

No. 7 ranked Michigan (24-7-5) came away with the 5-3 victory over top-seed and No. 20 ranked Minnesota (20-17-0) Saturday at Xcel Energy Center. The win gave Michigan a Big Ten Tournament title and an automatic bid to the NCAA tournament next week.

Saturday’s game was a rematch of last year’s Big Ten Tournament championship game when Minnesota came out on top with a 4-2 victory over Michigan in Detroit. These two teams have met 15 times in the postseason. The Gophers hold the edge at 8-5-2.

The story of the game was special teams. Michigan went 3-for-4 on the power play. The Gophers were 1-for-2.

“Tonight I thought we played the type of game we needed to play,” said Gophers coach Don Lucia. “In the end, their power play has been on fire.”

The game-winning goal for Michigan came on the power play with 4:33 left in the third, on a shot from the point by Zach Werenski, who had a four-point night.

“Unfortunately we took a penalty,” Lucia said. “Give them credit for making a play.”

Michigan’s Tyler Motte added an empty netter for his second goal of the game, giving him 31 for the season. Big Ten Player of the Year, Freshman of the Year and Tournament MVP Kyle Connor had a goal and three assists.

The goals for each side came in clusters. Once again, the Gophers found themselves playing from behind, down 1-0 after the first period. Just like in Friday’s 4-2 semifinal victory over Ohio State, the Gophers struggled out of the gate. They registered just six shots on goal but had 15 shot attempts in the first period.

Special teams came around just 19 seconds into the second, leading to JT Compher’s power-play goal at 1:31 of the period, good for a 2-0 Michigan lead.

Then the Gophers took over to grab a 3-2 lead after two periods. First it was Leon Bristedt on a pretty behind-the-net feed from Vinni Lettieri. A few minutes later Jake Bischoff got on the board. Then Kloos fired a shot from the circles with 29 seconds left in a power play.

Michigan got what they needed in the third, however, and skated to the Big Ten Tournament title.

Afterward, Gophers Kloos and Bischoff reflected on this past season. It’s frustrating right now, but Kloos called it a “prideful program.” Were said it was a blast this year.

The Gophers won a fifth-straight overall regular-season championship – a school record – boasted the Big Ten Goaltender of the Year in freshman Eric Schierhorn (who had 30 saves Saturday) and had three Second Team All-Big Ten Team members in Kloos, Hudson Fasching and Michael Brodzinski.

As for next year, Bischoff is confident that the team coming back will be pretty intact and Kloos agreed.

“Either way, there’s going to be a really good Gopher hockey team on the ice next year,” Kloos said.