Minnesota finally gets the best of St. Cloud State. 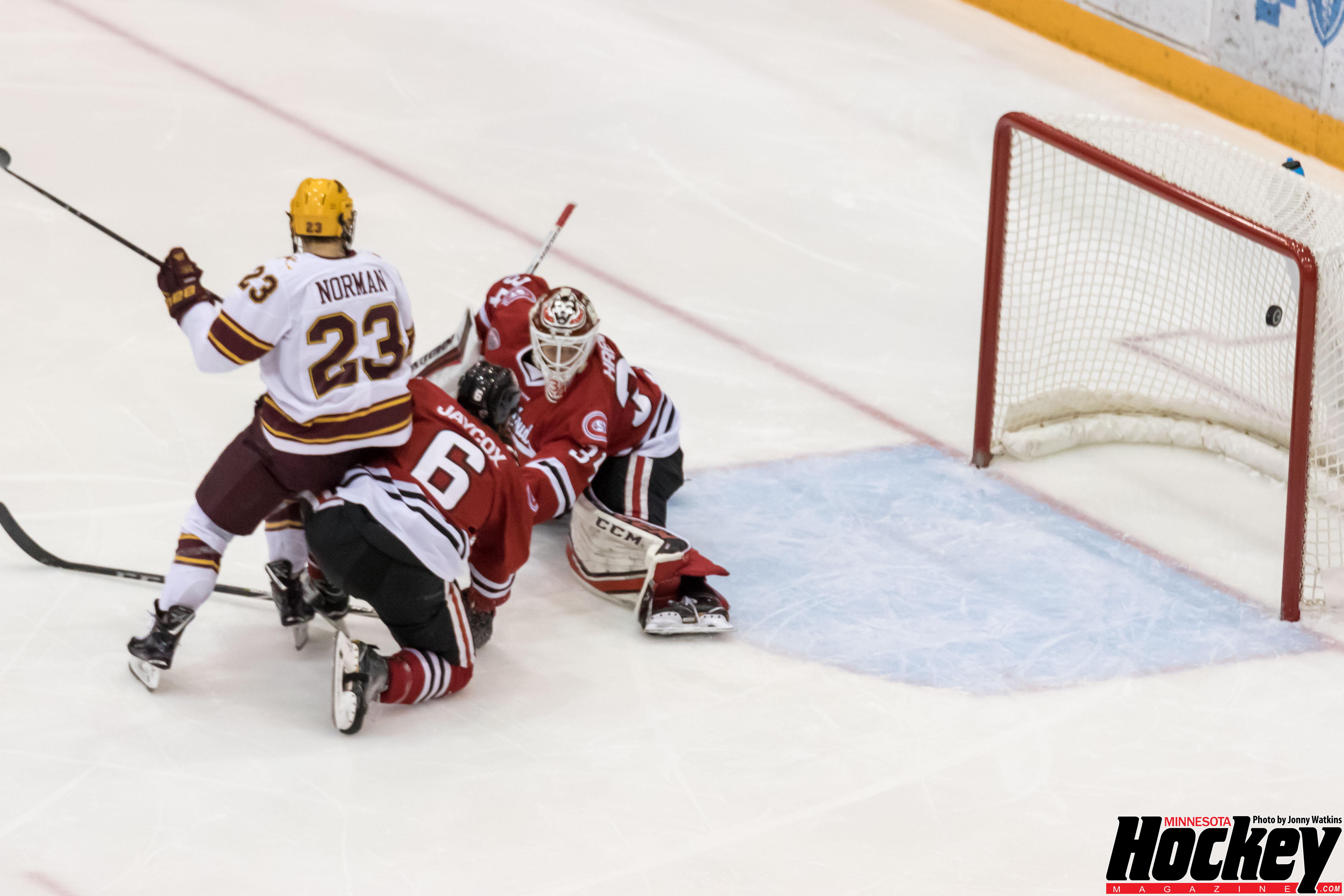 Minnesota finally gets the best of St. Cloud State

It had been awhile since the Gopher men’s hockey team bested their inner-state rival the St. Cloud State Huskies.

“In the time that I’ve been here, we haven’t been too great in our state,” Gophers sophomore Darian Romanko said after Sunday’s win. “So it feels good to get a Minnesota win.”

Minnesota coach Don Lucia called the Huskies the best team they’ve faced all year following the series-opening 5-2 loss the evening before. Lucia’s not the only one who shares that opinion, as the Huskies entered the weekend as the No. 1 team in the nation, according to USCHO.com, and has been on top, or near the top of the polls for the majority of the season.

Traditionally, college hockey games are played on Friday and Saturday, but both teams accommodated one another in the preseason to switch the games to Saturday-Sunday series, as each had ties to the World Junior Championships in Buffalo, New York. Team USA was coached by St. Cloud State bench boss Bob Motzko while SCSU’s Ryan Poehling and Minnesota’s Ryan Lindgren and Casey Mittelstadt were also on the team.

As Team USA captured the bronze medal at the tournament on Jan. 5, both Mittelstadt and Lindgren’s equipment was lost on the flight back, which meant the Gophers were without both players for Saturday’s game. Despite the Gophers netting the first goal in the series opener, their lead didn’t last long as St. Cloud State junior Mikey Eyssimont scored twice and Jeff Smith made 21 saves in a 5-2 win.

However both teams made changes in net for the Sunday’s game. Usual Gopher mainstay, Eric Schierhorn, sat on the bench, as sophomore Mat Robson made his fourth start of the season. Meanwhile, freshman David Hrenak got the call for St. Cloud State. The Huskies have rotated both Smith and Hrenak for the majority of the season. Despite two power plays in the first twenty minutes, the U of M could not convert on the man advantage, adding to their special team woes. Over their last five games, Minnesota is a shocking 0-27 on the power play. By the end of the first period, neither team lit the lamp.

It was another slow start in the second period and as the game reached its halfway point, neither team was on the scoreboard. And towards the end of the period, there was some controversy as it appeared Eyssimont scored his third goal of the series for St. Cloud.

There was an official review for a man in the crease, but the goal still stood. Lucia then challenged that St. Cloud State had too many men on the ice and another review ensued which confirmed Lucia’s assertion and the goal was overturned. Coach’s challenges are now allowed in the regular season, outside of the last two minutes of the regulation, to determine if a play that led to a goal was offsides or if the attacking team had too many men on the ice.

The Gophers netted the game’s first goal on Romanko’s second of the season 3:10 into the final period. The goal was unassisted, but you could give an unofficial assist to St. Cloud freshman Luke Jaycox, who thought he was clearing the zone, but he put the rubber right on the tape of Romanko’s stick.

St. Cloud had their chances though as they drew a power play with seven-minutes remaining and put on 15 shots in the final period. They also outshot their opponent 25-11 over the final two periods. But even with the extra-attacker on the ice, the Huskies weren’t able to convert and Gophers senior Mike Szmatula iced the game with an empty-net goal.

“I’m happy with the response,” Lucia said. “We were disappointed in some of the aspects of our game. But you’re still going to be playing a really good team, so they can expose you at times. But I thought our energy, our battle level and our wall play was much better tonight.”

The win was big for the Gophers, and will definitely help them out in the Pairwise ranking for getting into the NCAA Tournament in March. Now the team will close out their regular season against conference opponents in the Big Ten. They’ll also have to be a much better team on the road as the Gophers have just one win in 10 road games this season.

Up next for the U of M is the Michigan Wolverines on Jan. 12 and both games will be played at 3M Arena at Mariucci, where Minnesota is 11-2 on the season.

On the flip side, St. Cloud State will host Western Michigan University next weekend.