No. 1 Minnesota squeezes by UMD in Icebreaker opener. 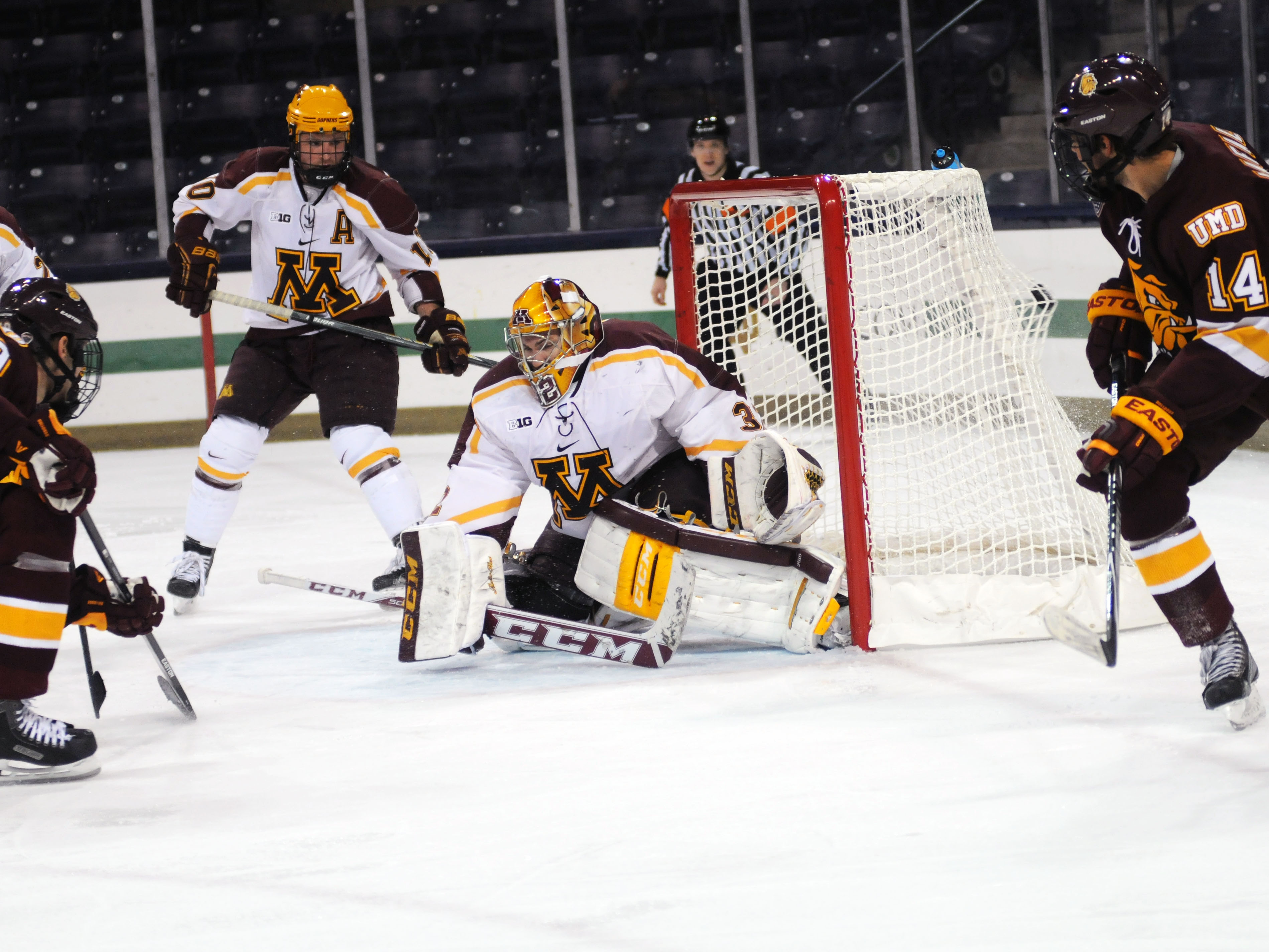 No. 1 Minnesota squeezes by UMD in Icebreaker opener.

SOUTH BEND, Ind. – To say Minnesota’s 4-3 win over Minnesota-Duluth on Friday to kick off the annual Ice Breaker Tournament was sloppy would be an understatement. Even a first-time hockey observer in attendance at Compton Family Ice Arena on the campus of the University of Notre Dame would have probably been able to tell you the game was the season opener for each team.

“It was definitely the first game for both teams” said UMD coach Scott Sandelin, “We really don’t like spotting a team like that two goals, they’re too good of a team.”

Had this not been a rivalry game between two storied teams, it could have been an ugly game. But since there’s bad blood between the two, there were flashes of great plays and hard hits. Both teams exchanged moments of greatness and moments of absent-mindedness. In fact, at least four of the seven total goals scored were created off of sloppy play and turnovers.

“I thought at times our game got real sloppy, for the first game of the year which is not a surprise” said Minnesota coach Don Lucia, “I thought once we’re up 4-1 going into the third we were in good shape, but then you give up a turnover now it’s game back on and it’s 4-3.”

Given the circumstances, both teams played a relatively good game overall, especially with many freshmen seeing NCAA ice for the first time.

One of the most impressive performances was that of UMD freshman goaltender Kasimir Kaskisuo. He was slightly hung out to dry early in the first period by turnovers and sluggish backchecking, but he recovered very quickly, especially for a freshman goalie in his first college hockey game against a hated rival (which also happens to be ranked No. 1 in the country).

“That was hard, it’s one of those things where you’re going ‘oh boy’. I mean, [Kaskisou’s] first shot is a breakaway from one of the best players in the country” said coach Sandelin, “It’s probably not the start we envisioned but I thought he battled through it. He probably had nerves just like every typical freshman but I thought he settled down and looked pretty good the second half of the game.”

Minnesota’s was more of a veteran presence as Kyle Rau led the Gophers offensively netting one goal and two assists. Minnesota broke out to a 3-0 lead before UMD battled back to make it 3-1. But the Gophers took a 4-1 lead into the second intermission.

“I thought we had the puck quite a bit but we just kept turning it over” said coach Sandelin, “There’s not a lot of teams you want to be poor with the puck, but thank God they kind of had the same thing going on as the game went on.”

Minnesota (1-0) goes on to face the winner of Friday night’s game between Notre Dame and RPI at 3:30 p.m. on Sunday in the Icebreaker title game. Minnesota-Duluth (0-1) takes on the loser of that game at noon on Sunday for third place. The one-day break between games is due the Fighting Irish football team hosting North Carolina on Saturday afternoon.

“I thought our ten minute game today was real good, we were able to score a couple of early goals and Kyle was a big catalyst of that” said coach Lucia, “I thought at times we tried to play too cute and that’s not where we need to be.”