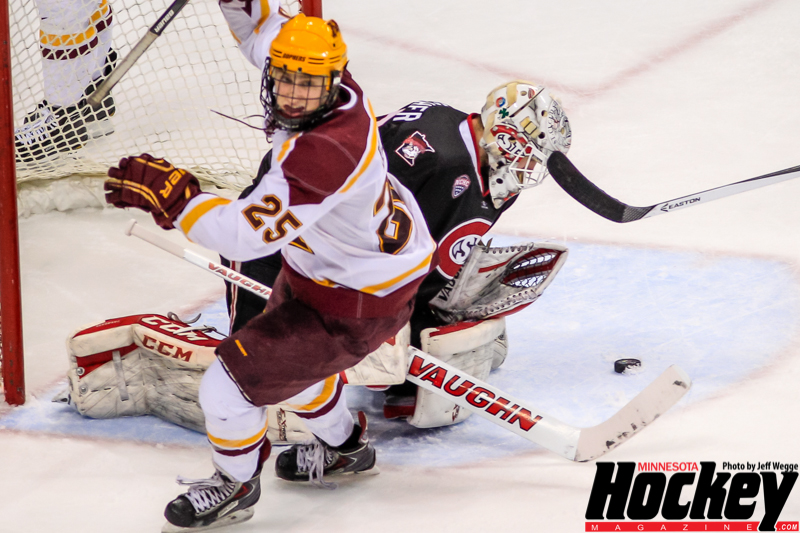 Gophers and Bulldogs set to battle for “The Cup” on Saturday …

Much of the focus leading into this weekend’s inaugural North Star College Cup tournament was on St. Cloud State’s No. 22 Jonny Brodzinski’s first time facing his younger brother, Minnesota freshman defenseman Michael Brodzinski, as an opponent.

While the elder Brodzinski did not disappoint, scoring his team-leading 12th goal of the year, it was the Gophers’ No. 22, junior Travis Boyd, who shined in scoring the game’s first goal and assisting on another in No. 1 Minnesota’s 4-1 win over No. 5 St. Cloud State before 14,388 in attendance at Xcel Energy Center on Friday night.

With the win the Gophers advance into the tournament’s championship game against Minnesota-Duluth which had to work overtime to beat Minnesota State earlier in the day.

The game marked the first-ever official meeting between the two schools as non-conference foes. The only other time the schools squared off outside of the WCHA came in the Hall of Fame exhibition game on Oct. 3, 1987 in Eveleth.

“Our game was efficient,” Minnesota coach Don Lucia said after his team extended its winning streak to six games. “I think we can play better in certain areas than we did tonight but anytime you can beat good quality team like St. Cloud State you have to feel good about that.

The Huskies outshot the Gophers 39 to 29 for the game but Minnesota sophomore goaltender Adam Wilcox turned aside 38 shots to earn his 17th win of the season. Captain Nate Condon’s second-period goal held up as the game winner while freshman Hudson Fasching scored his seventh of the year and, in turn, set up Boyd’s seventh at 8:58 into the contest.

“We came prepared to play, we played a good game,” Motzko said. “What killed us was their goaltender was outstanding tonight and special teams.”

The Huskies came out flying right off the bat, outshooting the Gophers 16-9 in the opening period. But Boyd scored the first of two Minnesota power-play goals on the night just seven seconds after the Huskies’ Kalle Kossila sat down in the penalty box.

Off a faceoff to the left of SCSU goaltender Ryan Faragher, Fasching outmuscled defenseman Andrew Prochno in the corner and fed Boyd on the doorstep.

“We didn’t come out very strong so getting the first one kind of maybe woke us up a little bit,” Boyd said. “I think we got better as the game went on but we still could improve a lot moving forward into tomorrow.”

Boyd’s goal held up past the game’s midway point until Brodzinski answered for St. Cloud State at 11:22 of the second. The former Blaine star took a trio of whacks at the puck in the crease before finally putting it behind Wilcox.

“It was a great pass by [Kalle] Kossila; [Cory] Thorson really created the whole play with that hit on the defenseman,” Brodzinski said. “It popped back to Kalle and it was just a 2-on-1 in front of the net and he made a great pass to me in front.”

Brodzinski led the Huskies with seven shots on goal on the night.

“He’s a good player, he’s physical, he’s got a heavy stick and he can shoot it a ton so he’s the wrong guy to have that many shots on goal,” Lucia said.

But Condon restored Minnesota’s lead just three minutes later and Fasching’s power-play goal, finishing off a rebound of a Boyd shot, ultimately finished off the Huskies.

“We got a puck through to the net on the power and Hudson was there to clean up the rebound, which was good for him because he hasn’t scored a goal in a while,” Lucia said. “We talked about our team kind of going through different guys going through a little bit of a drought so it was good to see Hudson get a goal.”

Fasching, who scored twice for Lucia and Team USA at the 2014 World Junior Championship in Malmo, Sweden, tallied his first on U.S. soil since scoring against Minnesota State on Nov. 16.

Charlie Lindgren replaced Faragher to start the third and St. Cloud State pelted Wilcox with another 13 shots in the final period but Wilcox, who was deservedly named the game’s No. 1 star, withstood the Huskies barrage and Seth Ambroz closed the scoring at 19:31 with yet another empty-net goal.

“They’re a good team, they put a lot of pressure on you, they’re well coached and they easily could have won the game tonight with a couple breaks,” Lucia said.

Motzko would undoubtedly concur with his counterpart.