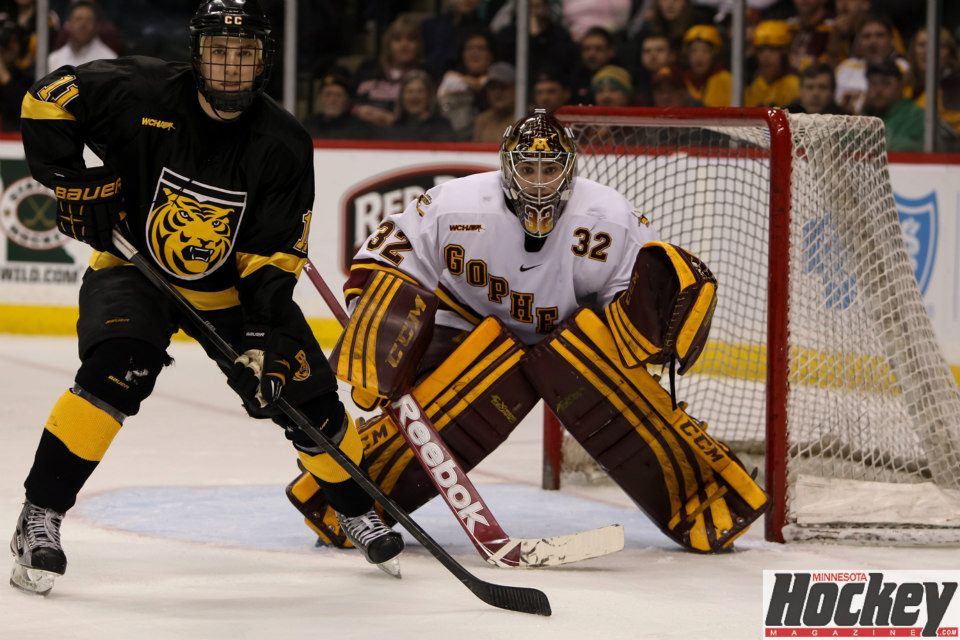 The puck is about to drop on a new era of hockey at the University of Minnesota. 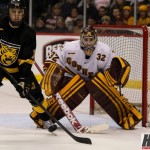 Featured Image: Gopher goalie Adam Wilcox will be staring down some unfamiliar foes this season in the Big Ten. (MCM Photo / © Jeff Wegge)

Joining the Big Ten Conference with the likes of border foe Wisconsin and former rivals Michigan and Michigan State, lofty expectations surround the Golden Gophers once again this year, with many fans hoping for a cakewalk through what is perceived to be an easy conference for the dominating Gophers.

And if last week’s 5-1 exhibition win over Lethbridge was any indication of a season to come, things look solid for Minnesota and those expectations might not be too far out of reach.

“(The freshmen) did a good job,” Minnesota coach Don Lucia said. “I think some returning players improved from where they were a year ago and that is a real positive.”

Highly-touted freshman and Apple Valley native Hudson Fasching tallied his first collegiate goal (adding an assist for a two point game) and started the Minnesota scoring and looks as great as he was expected to be.

Fasching and the rest of Minnesota’s freshman class—one of the best recruiting classes the Gophers have had in recent years—are looking to be the pillars of the Gopher foundation, making up most of the roster. Minnesota brings in only five seniors this season along with five juniors for the upperclassman.

Lucia said he’s still looking to the older guys to help the young core adjust to the college game where needed but ultimately likes what he sees in all of his players this season.

“I think we are a little deeper up front then we were a year ago,” Lucia said. “I think we can have four pretty balanced lines.”

Minnesota drops the puck on the season tonight at 7:10 p.m. against Mercyhurst in game two of the Ice Breaker Tournament. Expect a rocking crowd at Mariucci as the Gophers head into what looks to be a very promising season.

Why the Gophers will exceed expectations: As most know, the Gophers don’t rebuild, they reload. This year’s incoming freshman are one of the best Minnesota has seen in a long time. Combine that with Rau, Condon and Reilly among others and you can expect the maroon and gold to be hoisting the hardware at the end of the year.

Why the Gophers will fall short of expectations: Even the most promising team has its downfalls, and time and time again Gopher fans have seen it happen (Holy Cross comes to mind) even in the seasons that Minnesota ranked in the top 5 all year long. It’s never going to be a cakewalk and with a target on their backs each game as the top dogs Minnesota could realistically fail.