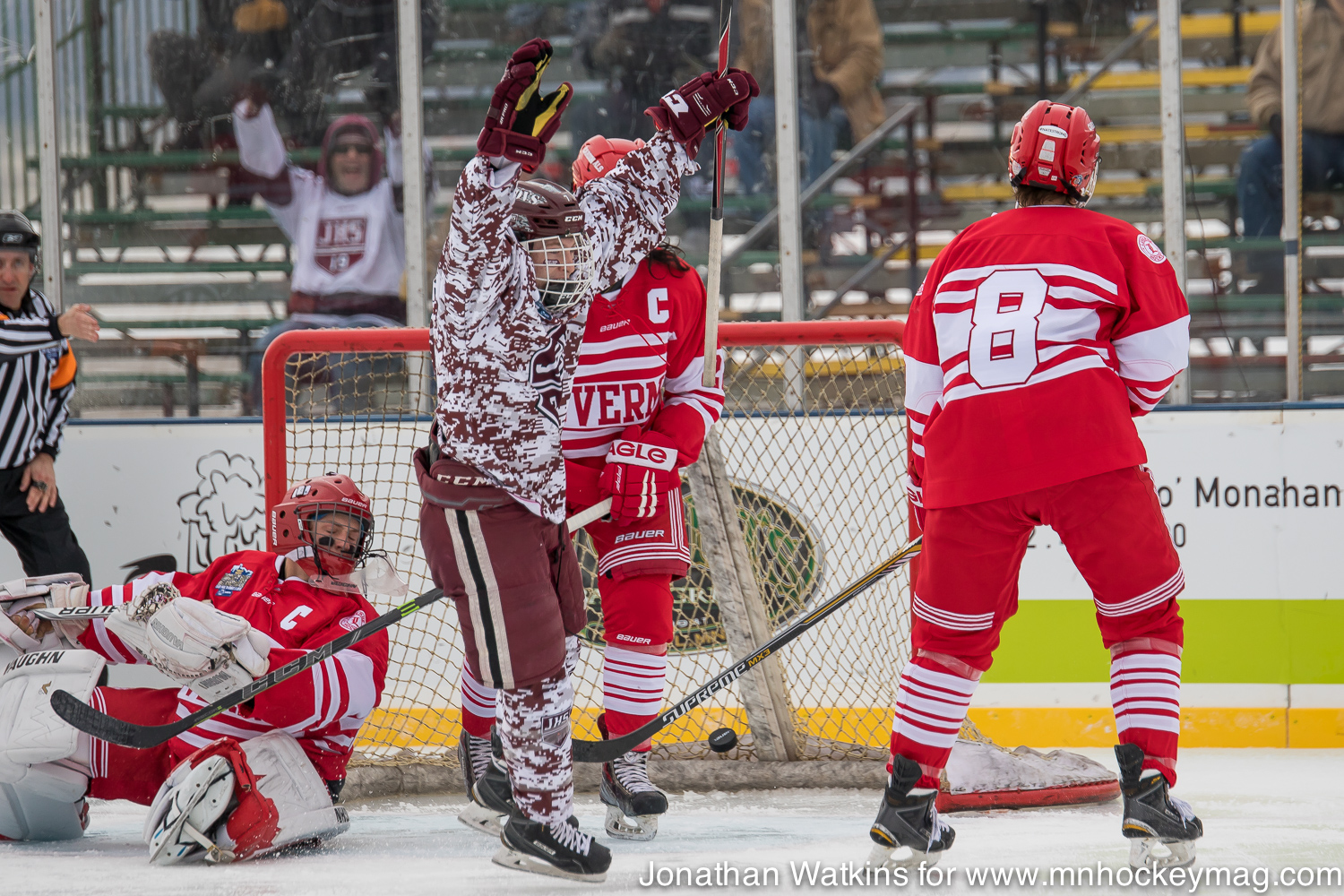 The Governors outlasted the Luverne Cardinals, 6-5, with a game winning goal in the final minute at Holman Field Saturday morning for the first Hockey Day Minnesota matchup of the day. St. Paul Johnson improved to 11-5-1 while Luverne suffered just it’s third loss on the season, moving to 16-3.

SPJ head coach Moose Younghans has coached in all three of Johnson’s Hockey Day Minnesota appearances, but the combination of the victory and experience at Holman Field will make Saturday morning one to remember for the bench boss.

“They’re all huge, but probably this one [ranks the highest on our list] especially because of this setting with all the military stuff and the beautiful venue,” Younghans said. “We can go to Payne Avenue, Arcade [Avenue] tonight since people are going to be smiling down their tonight.”

Freshman defenseman Karl Fish played a key role in making the game against Luverne one to remember, scoring the deciding goal from the point in the final minute. While he halted Luverne’s hopes of coming from behind, Fish also accomplished a personal aspiration with the game-winner.

“I always dreamed about it and when they said we were going to play on Hockey Day, I thought it might come true, and here it is,” Fish said.

After a scoreless first period with strong defense from both teams, there was no shortage of offense in the second.

Luverne started off the scoring run with a goal 15 seconds into the period. But, before the Cardinals could finish celebrating their goal, the Governors tied the score 13 seconds later. And 1:02 into the second period, St. Paul Johnson extended its lead to 2-1.

The Governors continued their run with a top-shelf goal from Fish and a power play goal with 6:05 left in the first period, the Governers looked to be running away with the game before the second period was over.

But the Cardinals weren’t about to call it a game.

Luverne scored a power play goal of its own shortly after, off the stick of sophomore forward Nick Behrend. With two more goals before the end of the period, the Cardinals were right back in the game down 5-4.

“We played pretty bad the first half [of the second],” Luverne head coach Derrick Brown said.  “I think the guys just kind of loosened up a little bit — I think it got a little ragged on both sides — and after the second period everybody said let’s get back playing the way we’re supposed to play. It was a good battle.”

The Cardinals held the momentum going into the second intermission. Yet Younghans and his team weren’t about to lose their composure.

Luverne tied the score up with 4:04 left in the third. But Fish’s goal in the final minute ultimately gave the Governors a victory they can build off of.

“We’re going to use this as a springboard and we want to contend for the section, and maybe someday get back downtown again,” Younghans said. “Who knows, this could be that special magic here for us.”