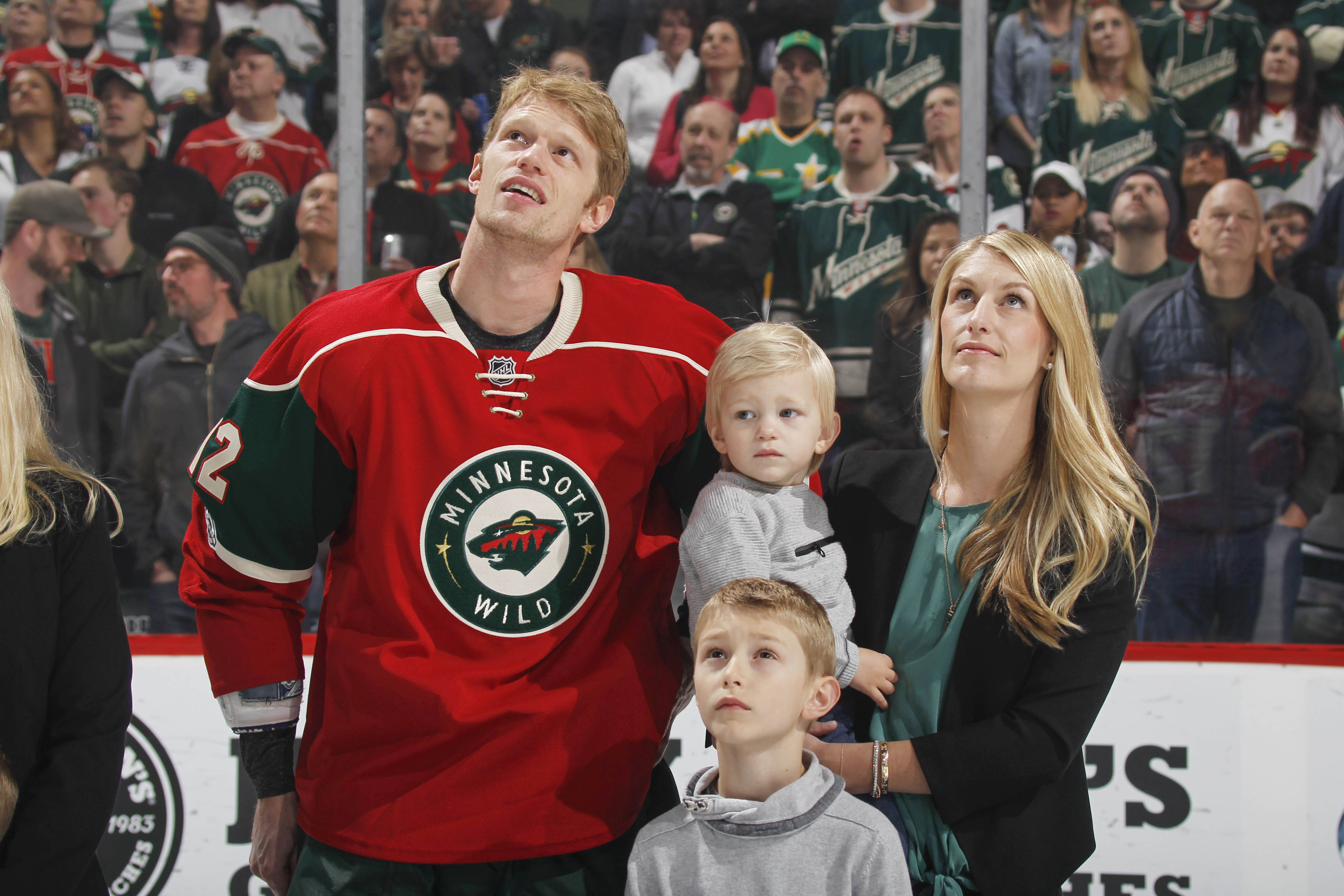 SAINT PAUL — When Eric Staal stepped onto the ice for his first NHL game with the Carolina Hurricanes, California voters were just two days removed from electing their second actor, Arnold Schwarzenegger, to the Governor’s office and it would be another five days before the Chicago Cubs and Cubs’ Nation met Steve Bartman.

More than 13 years later, the four-time Terminator replaced a TV host who left to become President of the United States and the once-cursed Cubs are world champions.

It’s a crazy, mixed-up world, except for Staal, who has since eclipsed 1,000 games in a distinguished 13-season career.

Staal’s wife, three sons, and parents were in attendance at Xcel Energy Center on Tuesday night to see him honored for becoming the 311th player in NHL history to hit the 1,000-game mark, and the fifth to do so in a Wild sweater.

“Those are moments and memories that you never forget,” Staal said. “Sometimes it can be awkward because there’s so much focus in you individually when this is such a great team game and team sport but it’s a special milestone and it’s something that I’m proud of.

“To have my family and parents and people that mean the most to me to enjoy it with it makes it even better.”

The ceremony took place prior to his current team, the Minnesota Wild, squaring off against the Hurricanes, the team for whom he skated his first 909 games.

Staal received the customary silver stick, emblematic of his 1000th career NHL game, from Wild GM Chuck Flecher and Minnesota owner Craig Leipold presented Staal with a $5000.00 check made out to the Staal Family Foundation.

Appropriately, Staal set up linemate Zach Parise’s 19th goal of the season less than six minutes into the game seconds after nearly scoring the game’s first goal himself. He later added a second assist on Nino Niederreiter’s third-period tally.

The trio of Staal, Parise and Niederreiter combined for eight points in Minnesota’s 5-3 win to clinch home ice in the first round of the Stanley Cup playoffs where the Wild will likely host Mike Yeo and the St. Louis Blues.

“We were dialed in,” Staal said. “We were on the puck really well … Would’ve loved that first one I almost had. Too many thoughts going through my head as I fired it but we were able to obviously cash in right after with Zach’s, which was nice.” 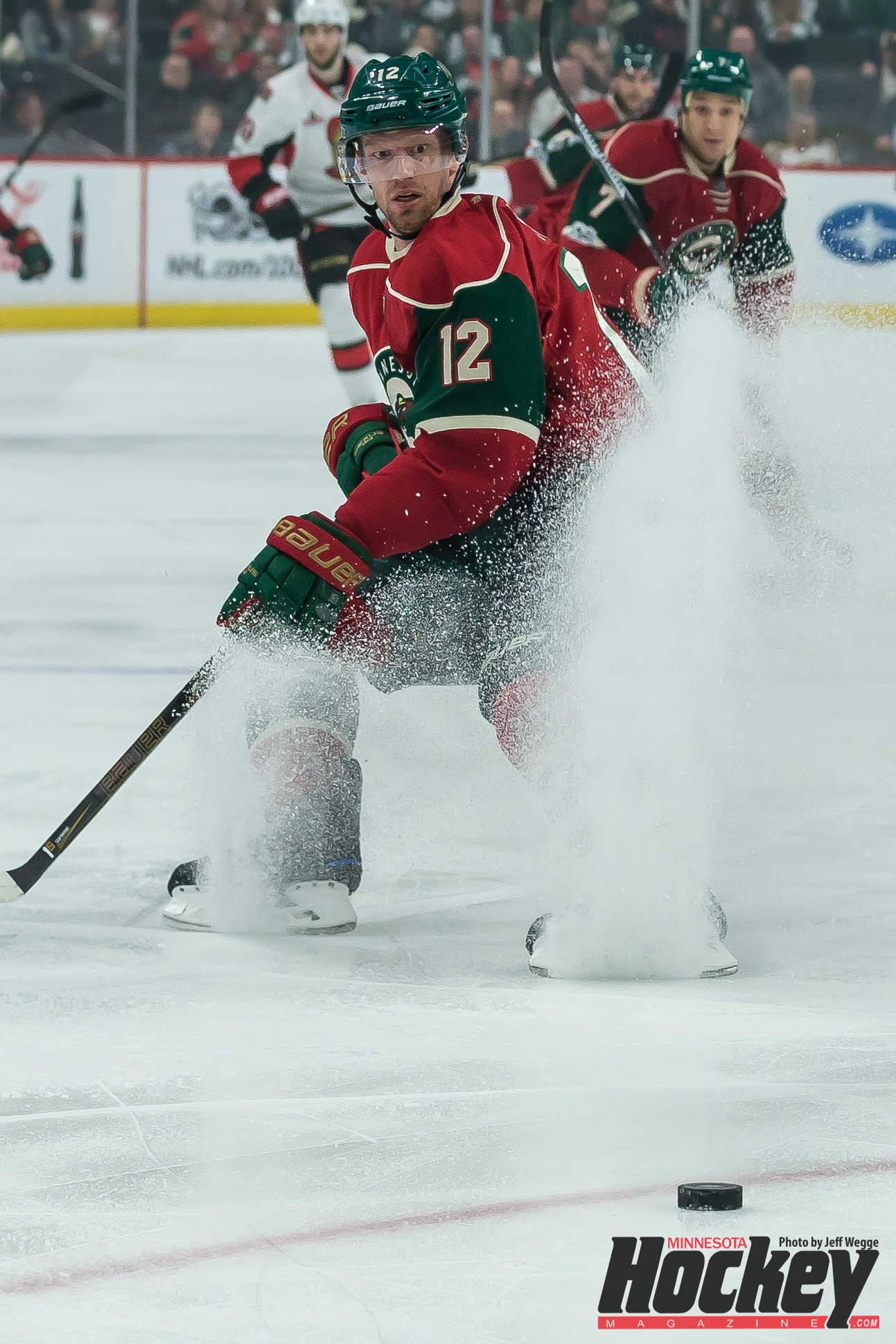 Although Staal played his milestone game in Winnipeg on March 19, two days after the Wild visited Carolina, the team chose to hold off on recognizing the accomplishment until his brother, Jordan, and his former Hurricanes teammates could be on hand.

“When they approached me to say that’s what they were thinking of doing, I had never really thought about it,” Staal said after the Wild’s Tuesday morning skate. “I thought it was pretty classy. Obviously, I spent a lot of time there, a majority of games have been there. They do the stick pass thing, so to be able to do that with them here, and obviously Jordan here, it’ll be pretty special.”

On behalf of the Hurricanes, Jordan presented Staal with commemorative painting featuring his likeness in three different poses and jerseys, one of them featuring Staal lifting the Stanley Cup above his head.

“For him today, especially to get honored when Carolina’s in town, that’s a pretty neat thing considering that’s where the bulk of his career was and that’s where his brother plays,” Boudreau said.

Selected in the first round (No. 2 overall) by Carolina behind Pittsburgh’s Marc-Andre Fleury in the 2003 NHL Entry Draft, Staal, who is the first of that future-star studded draft class to reach 1,000 games, made his NHL debut on Oct. 9, 2003 against the Panthers in Florida.

“You dream of playing in the NHL,” Staal said. “You watch it growing up and the first time you throw on the jersey and step on the ice it’s kind of that realization that all that hard work that you did it’s come to life.”

Five games and two weeks later Staal’s first NHL goal and point on a 2-on-1 with Jeff O’Neill turned out to be the game winner in a 2-0 Carolina win at Boston. He would go on to score 10 more goals in his rookie campaign to go with 20 assists.

“[O’Neill] was carrying the puck over the blue line, made a great fake on the goalie and ripped a pass over to me,” Staal said. “I had nothing but time and net, which was perfect, and that’s what you want with your first one and I was able to put it to the back of the net.”

Staal’s sophomore season was delayed an entire year due to the NHL’s lost 2004-05 lockout season but the wait turned out to be well worth it for the Hurricanes and their fans.

He posted what remain career highs in goals (45) assists (55) and points (100) in 2005-06 and tacked on 28 points (9 goals, 19 assists) in 25 postseason games in leading the Hartford/Carolina franchise to its first Stanley Cup championship.

The four-time NHL All-Star and 2008 All-Star Game MVP was named the franchise’s 13th captain and fifth since it moved to Carolina on Jan. 20, 2010, replacing Rod Brind’Amour who assumed Staal’s assistant captain role for the remainder of his final NHL season.

“It was different the way it went and, for me, a little uncomfortable just because of how much respect I had for Rod and winning a Stanley Cup with him as a captain and him still being there,” said Staal who initially declined the offer. “But he called me and Rod had a great conversation with me  and he was extremely gracious … I learned a lot from him as a person on the ice and off the ice.”

Staal’s production dipped late in his Carolina career, coinciding with the team’s struggles overall. With just 33 points in 63 games for the Hurricanes last season, Staal was dealt to the New York Rangers at the trade deadline where his impact was minimal as the Rangers were eliminated in the first round of the playoffs by Pittsburgh.

For the first time in 12 seasons, Staal became an unrestricted free agent on July 1 and signed a team-friendly three-year, $10.5 million contract with Minnesota the same day. After a summer devoted to preparing himself for a return to form, Staal made an immediate impact on his new team both on and off the ice.

Staal leads the Wild in goals with 27 and his 63 points are second only to Mikael Granlund’s 68. The 32-year-old Staal also leads the club in game-winning goals (7) and shots (205) and sits third in assists with 36.

“He’s a pro in every sense of the word,” Boudreau said. “He’s everything that I was hoping that he’d be and more.”