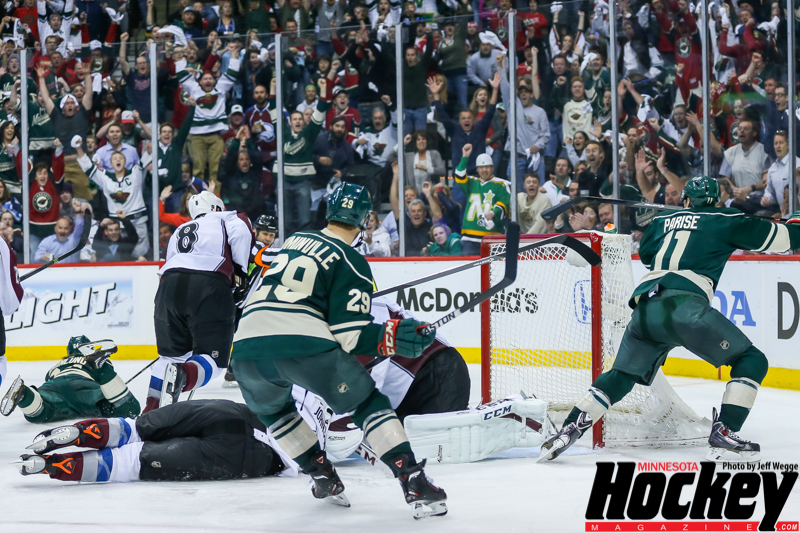 SAINT PAUL — Mikael Granlund scored the overtime winner as Minnesota topped Colorado, 1-0, in front of a sellout crowd of 19,221 in Game 3 of its best-of-seven Stanley Cup Playoff first round series Monday night at Xcel Energy Center.

Just 5:08 into overtime, Granlund spun off a Jan Hejda check along the right wing boards at the hash marks and accelerated to the net. Granlund lost his footing as he crossed in front of the Colorado net, but dove forward releasing the puck as he hit the ice into an open net behind stunned Colorado goaltender Semyon Varlamov.

Minnesota’s Zach Parise said the Wild wanted to take advantage of the Avs commitment to man-to-man coverage in their own zone by taking advantage of the space allowed when beating a defender out of the corner or off the wall and going hard to the crease.

“[Granlund] was all over the puck,” Parise said. “In the first period he was walking out of the corner and had a lot of stuff plays and, ironically, that’s how he scored the goal and it was awesome.

“I thought we deserved a couple more tonight but Varlamov was unbelievable.”

The Wild outshot the Avalanche 46-22 for the game—setting franchise playoff records for most shots in a game and a period, with 22 in the first—in cutting the Avs lead in the series to 2-1. But Varlamov frustrated them throughout then night with his 45-save effort through three scoreless periods and overtime.

“The part where I give our guys a lot of credit is being mentally tough enough to stay with it,” Minnesota coach Mike Yeo said. “We felt like we were taking it to them pretty good so to not get frustrated to that point, to not start to drift and get away from our game, that’s something the good teams do.”

“We know he’s a really good goalie but they way we played I think we kind of knew we were going to get rewarded,” Granlund said. “If the other guy is hot like that you just need to keep going, keep shooting and you might get rewarded.”

The game was just Granlund’s third since missing the team’s final six regular season games due to an upper-body injury.

“Granny coming off the injury, you know it’s going to take a couple of games for him to get going, at least, and he showed tonight that it was only going to be a couple. He took it to a new level tonight. The goal he scored was just an amazing play but his all-around game was very much the way he’s played for us all year.

“Guys like that quite often find times at big moments to make big plays.”

Minnesota rookie netminder Darcy Kuemper, making his first career playoff start, stopped all 22 shots he faced to become the first Wild goaltender to record a postseason shutout. The last NHL rookie goalie with a shutout in his first playoff start was Boston’s Andrew Raycroft who blanked Montreal on April 7, 2004.

While Kuemper did not face a lot of rubber he avoided potential concentration lapses to come up big when called upon.

“It shows that I’m confident right now and it doesn’t matter if I’m getting a ton of shots,” Keumper said. “Obviously the way the team played in front of me made it pretty easy as well.”

With the win, the Wild move to 6-6 all time in postseason overtime contests, including 5-2 all-time against the Avalanche.

Minnesota hosts Game 4 at Xcel Energy Center Thursday at 8:30 p.m. CT. on FOX Sports North and KFAN 100.3 FM in Minnesota, CNBC nationally in the U.S., and TSN and RDS in Canada.