Green All The Way 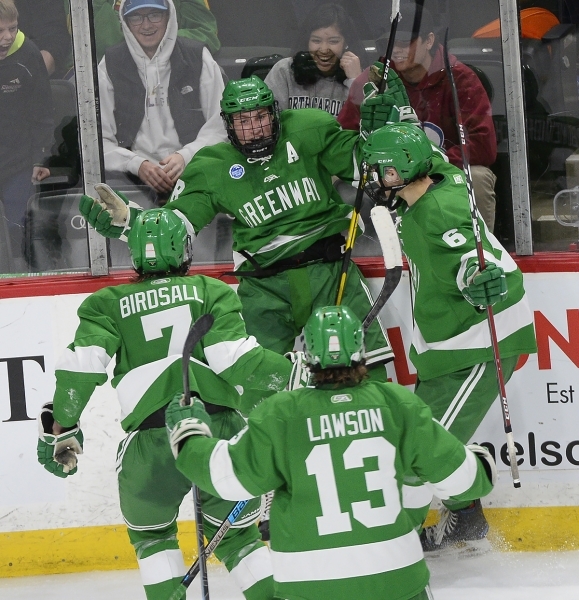 The No. 4 Greenway Raiders pulled off an emotional win, upsetting the No. 1 Mathtomedi Zephyrs in the semifinal round at state tournament on Friday.

With their season on the line with less three minutes to go, the Raiders capitalized on the power play with a rocket of a shot from senior Ben Troumbly, sending the game into overtime.

Twenty-three seconds into the extra period, once again, Troumbly was the hero, scoring the game-winning goal.

“There was a battle out front,” said Troumbly. “Loose puck came my way and I kind of just went around and I just put it in. I wasn’t even thinking at the time until after it kicked in and going to the championship.”

Even when they blew a 1-0 lead and found themselves down 2-1 late in the third, head coach Grant Clafton didn’t have to say too much to his group.

“Very limited coaching,” said Clafton. “When you believe you believe and these guys believe in themselves and we’re calm. It’s a calm, cool, collected, mature group of kids. It’s a unique deal and they don’t panic. I mean I’ve seen them do it since they’ve been in pee-wee’s. So yeah, (very) confident.”

Assisting on the game-winning goal was Donte Lawson, another senior who’s been playing out of his mind since sections.

He had 11 points – six goals, five assists – in three section games. Then he followed that up with four points – two goals and two assists – in the quarterfinal game. So obviously he put up four more points – 1 goal, 3 assists – including assisting on the game-tying and game-winning goal.

“I like playing on the big stage with my family over here,” said Lawson. “And bringing the whole community down is awesome and it’s special to us.”

For the No. 1 seeded Zephyrs, it’s a tough end to their season considering how close they were to getting to the state championship game.

“I thought this was the group that would push us over the top,” said Mahtomedi head coach, Jeff Poeschl. “They certainly have the talent and it’s obviously disappointing.”

With Greenway’s win, they head to the state title game to face St. Cloud Cathedral in Class A on Saturday, with puck drop at 12 PM.