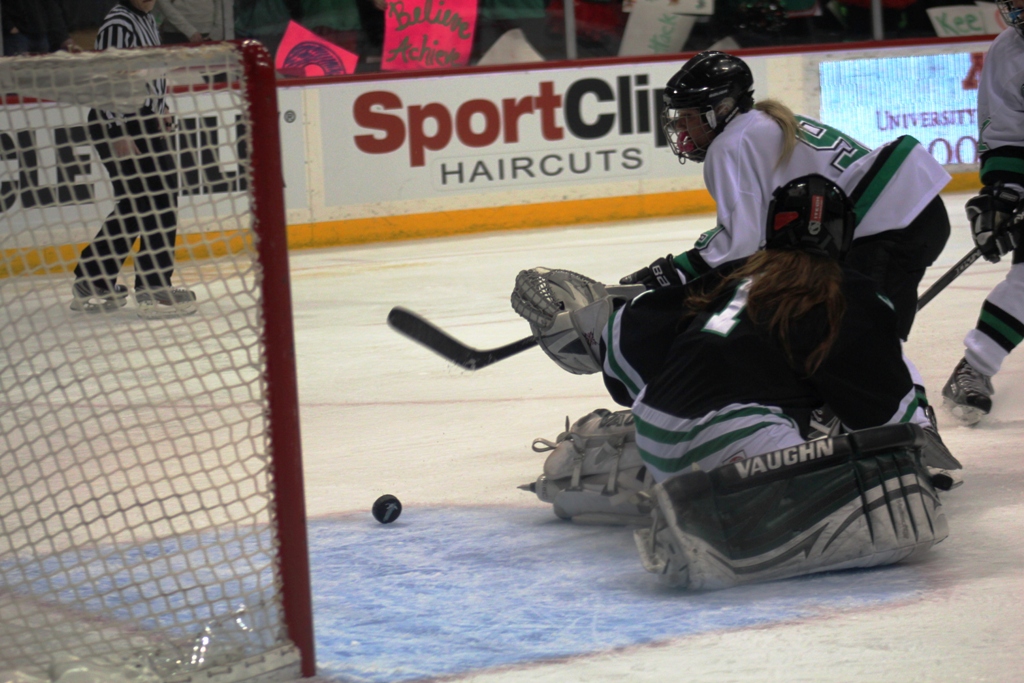 Mack’s sister Alexa made it a family affair as the junior added three points of her own (1-3–4) while Riley Koberinski contributed a goal and two assists. East Grand Forks goaltender Madi Galstad helped her team reach the state semifinals with 11 saves in the win. The Green Wave will face St. Paul United, 5-2 winners over Proctor/Hermantown, on Friday at 1:00 p.m. for a spot in Saturday’s state title game.

While falling in the first game of their first-ever state tournament was heartbreaking for the Dragons, senior forward Sarah Kivisto spoke of the opportunity to perform on such a huge stage.

“It was the best feeling skating on the ice for warm-ups,” she said. “Obviously we wish the score would have been better but we played a good game against a very good team.”

Trailing 3-0 less than five minutes into the second period, the unranked Dragons cut the deficit to two on Kennedy Sommerfeld’s even-strength goal at 4:24 and gained some life after a penalty-marred opening frame. But the Green Wave responded by flooding the LDC net with three goals in a 2:34 span near the midway point of the contest culminating with Mack completing her hat trick at 10:06.

The four-goal performance comes on the heels of Mack’s double overtime winner against Thief River Falls in the Section 8A finals in Warroad punching the Green Wave’s ticket to St. Paul. Her five-point effort on Wednesday ran her already school record-setting season total to 79 points (43-36–79).

“She’s stepped up and that’s the type of player she is, obviously it’s a bigger stage,” Scanlan said. “You might say she kind of relishes those challenges, but she’d be the first to say her linemates and her teammates are obviously a big part of that.”

Asked if he’d like to have been pushed a little harder with the competition ramping up in the semifinals, Scanlan said it wasn’t that important.