Green Wave Makes a Splash at The Tourney 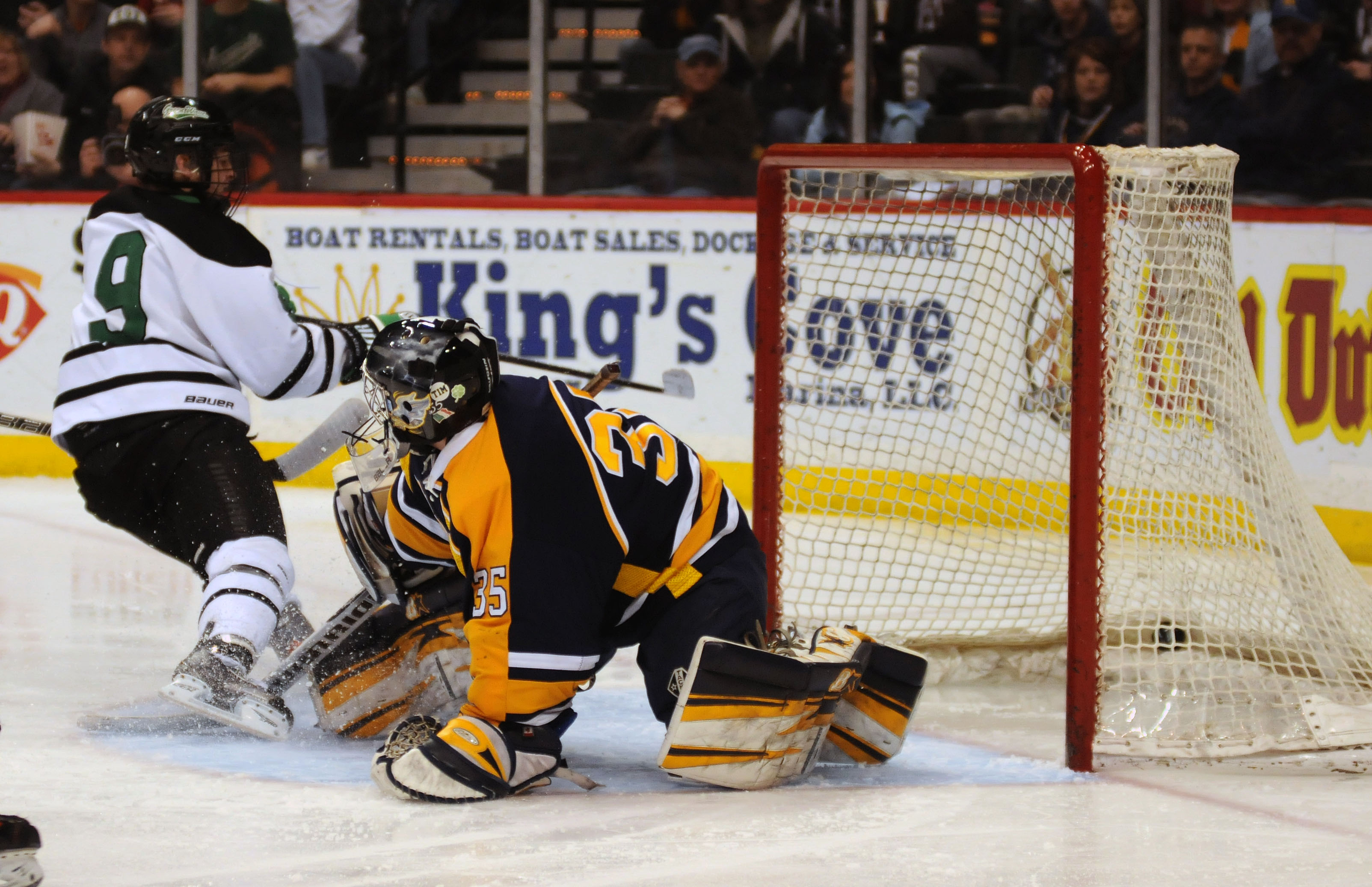 SAINT PAUL—Coming into the 2014 Boy’s Class A state hockey tournament, we knew we would have a new champion to be crowned. After St. Thomas Academy won the previous three Class A state championships, they made the move up to AA, leaving the throne unattended.

Hermantown advanced Friday to play in its fifth consecutive state championship game, all four of which the Hawks finished second. East Grand Forks blew by St. Cloud Cathedral, giving the Green Wave a shot at their first-ever state championship.

When the first period began, the Hawks appeared to be playing tight, and didn’t register a shot on goal until six minutes into the game. Though, after a series of Green Wave penalties, Hermantown started getting their opportunities.

With just 32 second remaining in the first period, the Hawks struck first. Scott Wasbotten gave Hermantown the 1-0 lead when he threw a puck out front from behind the net, which deflected off a Green Wave defender’s stick, and squeaked through the legs of EGF goaltender Josh Weber.

“To kill off those penalties and come out of that period only down 1-0 and give up a goal that was kind of flukey, that was a win for us,” Green Wave head coach Tyler Palmiscno said.

Wasbotten’s goal would be the only scoring of the first period and, with few shots throughout the period, it could have been assumed this would be a low scoring, defensive battle type of game. That was certainly not the case.

The Green Wave were explosive in the second period, putting five goals on the board and shutting the Hawks out. Dixon Bowen knotted the game at one apiece for EGF when he received a perfect one-touch pass from Tanner Tweten, springing him on a partial breakaway. Bowen split the Hawks defenders and cut to his backhand before tucking the puck into the net for the goal.

Then just over a minute later, Eddie Eades buried a goal from the high slot to give EGF the lead, and it seemed to be all Green Wave from then on.

Of the goal, Palmiscno said “Eddie’s, that was the one I thought told us we could really win this game.”

Green Wave forward Jace Pesch added a power play goal when Grant Loven collected a Hawks turnover behind the net and threw it out front to Pesch, who one timed the shot that squeaked just past Hermantown goaltender Adam Smith.

The Hawks could’t stop the bleeding, and the Green Wave added two more in the period from Loven and Corbin Reed, both of whom gathered loose pucks and fired them past Smith to push the lead to 5-1 heading into the third.

“They were great,” Hermantown coach Bruce Plante said. “They were nasty physical, and fast, they played great and stuck it to us.”

In a much more even third period, the Hawks were able to outshoot the Green Wave, and even gain a little momentum when Parker Hawk scored 2:31 into the third to pull the score to 5-2. But EGF kept pouring it on, and pulled away in this one with a slick breakaway goal by Cale Mack, and a Tweten power play goal, giving the Green Wave a 7-2 lead.

Jared Zeleznikar was able to bury a Hawks goal late in the game, but it was too little, too late for Hermantown. In a 7-3 victory, EGF skated to their first state championship in school history.

“This senior class set this goal five, six years ago,” Palmiscno said. “They set this a long time ago and then they get up and work for it, so it’s special”

Eades expressed his excitement after the game.

“It’s pretty special obviously to be the first,” he said. “We kind of did it maybe for all the times we came up a bit short.”

This time the Green Wave didn’t come up short, and were rewarded with the opportunity to celebrate in a team yard sale as the final buzzer rang, and then their Class A state championship trophy, the pinnacle of high school hockey, to finish a great season.

On the other side, the Hawks placed second for the fifth consecutive season. Plante was much more positive after this loss, though, than he has been after the championship losses the past four years.

“It feels a lot better losing to [East Grand Forks] than anyone else we’ve lost to,” Plante said. “They’re the same kind of simple program we are.”