Green Wave Too Much for Spartans 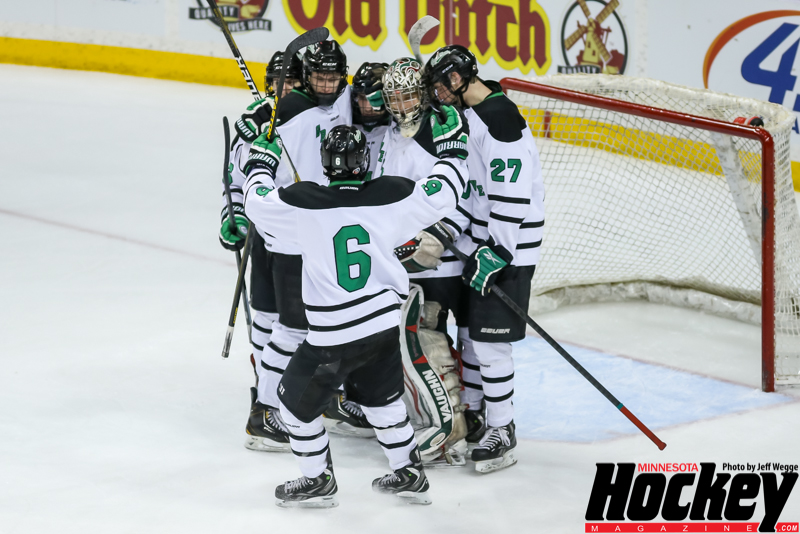 SAINT PAUL— After a slow start, the Orono Spartans entered the third period of Wednesday night’s Class A state tournament quarterfinal believing they were primed to make a run at No. 1 East Grand Forks. Trailing 3-1 after outscoring the Green Wave in the second period, the Spartans sought to be the team to score the all-important next goal.

But Nick Ranten picked off an ill-advised Orono outlet pass and buried his fifth goal of the season to extend the East Grand Forks lead on its way to a 5-1 win over the Spartans.

“It was good to make a game out of it,” Orono coach Kasey Yoder said. “That fourth goal was pretty much a back-breaker. We thought if we could pop a second on there and, who knows, maybe try and steal a game from them.”

But it was not to be as Tanner Tweten scored twice for the Green Wave and Colton Poolman chipped in three assists as East Grand Forks moves on to the state semifinals for the second consecutive season.

The Green Wave came out of the gate flying and cashed in just 2:18 into the contest as Reed Corbid banged in a rebound of a Jace Pesch shot. Just over four minutes later, Tweten score the first of his two goals in the period when Dixon Bowen’s shot from in tight squeezed past Orono goalie Jon Flakne into crease where Tweten pounced on it.

“Our guys tried but it’s a good hockey team we played,” Yoder said. “They outmuscled us, won nearly every battle and they know how to play the game. It’s a good eye opener as to where we hope to get to at some point.”

East Grand Forks coach Tyler Palmiscino was mostly satisfied with his team’s play and its three-goal lead after one.

Having been outshot 15-6 by East Grand Forks in the opening period, Orono made a push to begin the second and held the Green Wave mostly in check while scoring its only goal at 9:59. The Spartans’ Joey Luedtke forced a Tye Ausmus turnover deep in the East Grand Forks zone and Sam Challgren slid the loose puck to David McCluskey for his 12th goal of the year.

“You knew they were coming … and they did,” Palmascino said. “It wasn’t until about that five-minute mark, the T.V. timeout, where we calmed down and finished the second period the right way and I think that carried over into the third.”

The win advances the Green Wave into Friday’s 1 pm semifinal against the winner of St. Cloud Cathedral and Totino-Grace.

“We worked hard for the start of the second, most of the second really, but just tried to give what we could,” Yoder said. “Welcome to the state tournament for this group; we had a little surge there but, give them credit, that was their hockey game.”