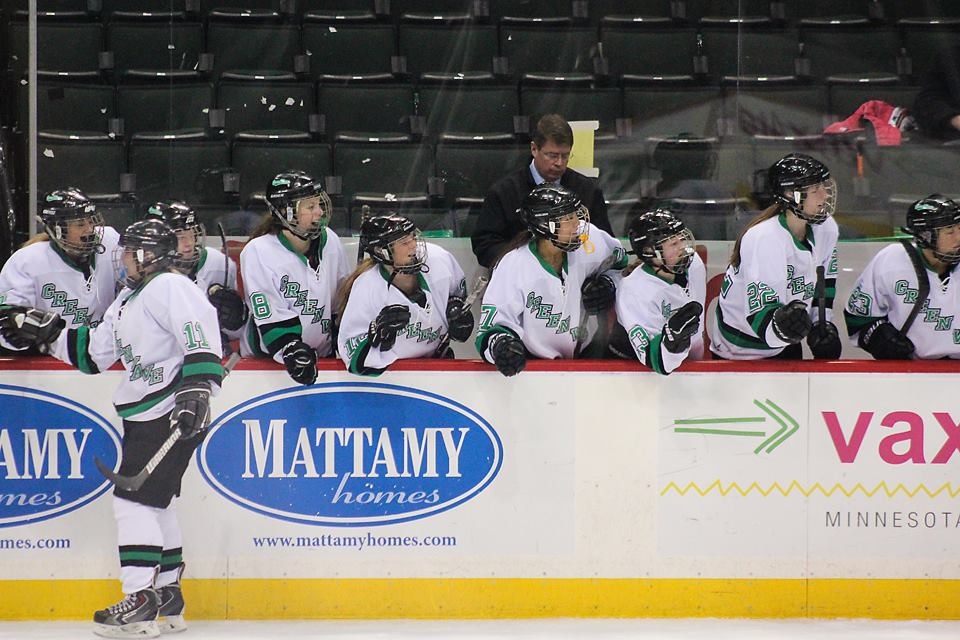 With a can do attitude, the Green Wave of East Grand Forks kept applying pressure, finally breaking through a tough United front and goalie Catherine Johnson with a 3-2 victory over St. Paul United.  Jim Scanlan, EGF head coach was impressed with the girls resolve “the girls never stopped believing, had great attitudes all the way through and were rewarded with a hard fought win”.  The battle tested Green Wave are used to close battles having to defeat Warroad in double overtime in the sectional semi finals and then beat the state’s top ranked Thief River Falls Prowlers in double overtime for their first entrance ever into the state tournament.

East Grand Forks was challenged early on and found themselves quickly down 2-0 as St. Paul United led by their Division 1 star Alev Baysoy’s scored two early  goals in the first six minutes of the game.  With the Green Wave starting slow and the quick feet of Baysoy, the St. Paul United club took the lead on Baysoy’ first goal with assists to Joie Phelps and Lauren Boettcher.  Just one minute and two seconds later, United would double their lead, with Baysoy scoring with an assist to Kate Hallett.  Green Wave coach Jim Scanlan noted “every minute is extremely important, it just goes to show how fast things can change”. 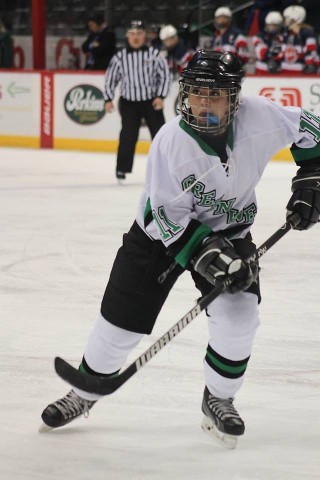 East Grand Forks would cut the lead in half on Junior Alexa Mack’s first goal at the 13:21 mark.  Scanlan was very impressed with Alexa and her effort “Alexa Mack really played well today, playing  her best game of the year, and it was nice to see her rewarded with the two goals”.

In between periods, Scanlan talked with his team regarding the defensive coverage in their own zone, and transitioning the puck up ice as soon as possible and limiting Baysoy.   The two teams came out hard to start the second period, but soon, East Grand Forks would take over in terms of scoring chances and puck control, out shooting United by an 8-2 margin but not having anything to show for it as United goalie Catherine Johnson played well. “The girls really played well defensively and transitioned the puck up ice which made a big difference.  Their number seven (Baysoy) is a special player with her quickness and the girls did a good job shutting her down”.

East Grand Forks took over control in the third period, as United appeared to tire.  With the Green Wave applying much pressure, Thompson battled hard in goal for United, facing 18 shots in the third period.  The Wave continued to push for the tying goal, and on a power play after Kate Hallet was called for checking,would be rewarded.  With the Green Wave moving the puck around  Mak Langei would get the equalizer with a shot from the top of the right circle deflecting past Johnson with an assist to Karly Nelson.

With less than five minutes to play, the game looked like it was going to be heading into overtime, but a slashing penalty on Baysoy gave the Green Wave and their strong power play unit a chance to end it.  Having scored earlier on the power play, the team was determined to pound one in and Alexa Mack would be rewarded knocking in a rebound from 10 feet out with assists to Riley Koberinsi and  Mak Lengei, who picked up her second assist of the game.

With the victory, the Green Wave take on perennial power and defending state champion, The Blake School, at noon on Saturday to determine the Class A champion.  The Blake School defeated Red Wing in double overtime on Friday for their ticket to the championship game.