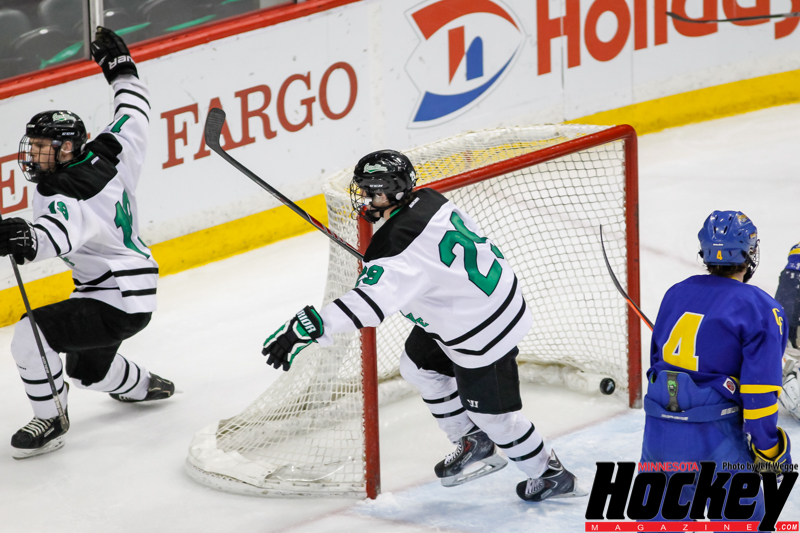 SAINT PAUL—The quest to reach the Class A state championship game is over. After the Hermantown Hawks took down the New Prague Trojans earlier today, the Hawks waited in anticipation to see who their opponent in tomorrow’s title game would be.

The No. 1 seeded East Grand Forks Green Wave faced off against the No. 4 seeded St. Cloud Cathedral Crusaders in what was a defensive battle.

The Green Wave got the scoring started early, finding the back of the net just 2:36 into the game when Colton Poolman fired a wrist shot from the point through a screen. EGF carried much of the play after that goal, though the Crusaders were still knocking on the door at times.

In what was a much more evenly played second period, SCC managed to tie the game. At the 12:57 mark of the second, Cathedral’s Matson Courrier made a beautiful back-door pass, threading the needle for Erik Gadbois to bury the puck to even the score. The Crusaders carried a bit of momentum after the goal, but the last minute of the second featured a number of great scoring opportunities for EGF.

While the Crusaders had managed to make a game of it, the Green Wave proved to be too much. At the 4:19 mark of the third period, Tanner Tweten scored his third goal of the tournament on a two on one rush, burying a beauty of a pass from Grant Loven. Green Wave junior forward Dixon Bowen said of the play, “Tweten finished it off for us, and that gave us some good momentum.”

SCC head coach Eric Johnson remained proud of the Crusaders for the game they gave the Green Wave.

“They made a play, and it was a good play” he said, “we gave them a good game and we’ll bounce back tomorrow.”

Watching this game, it was clear EGF was deserving of the No. 1 seed. They moved the puck constantly, almost always looking to pass before shoot, but still managed 36 shots on goal.

The Crusaders did all they could, and created enough opportunities to take the game to overtime, but always seemed to be just inches away from catching a break. SCC goaltender Zach Fritz was outstanding, stopping 34 of 36 shots, giving his team a chance to advance.

East Grand Forks will advance to its first state title game in school history on Saturday at 12 p.m., while the Crusaders will face off against New Prague in the third place game.

Heading into the championship game, EGF head coach Tyler Palmiscno sounded confident, “We’re more mature than last year” he said, “out of our 20 guys on our roster 14 or 15 are back from last year.”

The Green Wave players know what kind of special opportunity is ahead of them in tomorrow’s game, and won’t take it for granted.

“This is what we’ve been working for all the way up since youth hockey” said senior defenseman Eddie Eades, “to get a shot at it is pretty special.