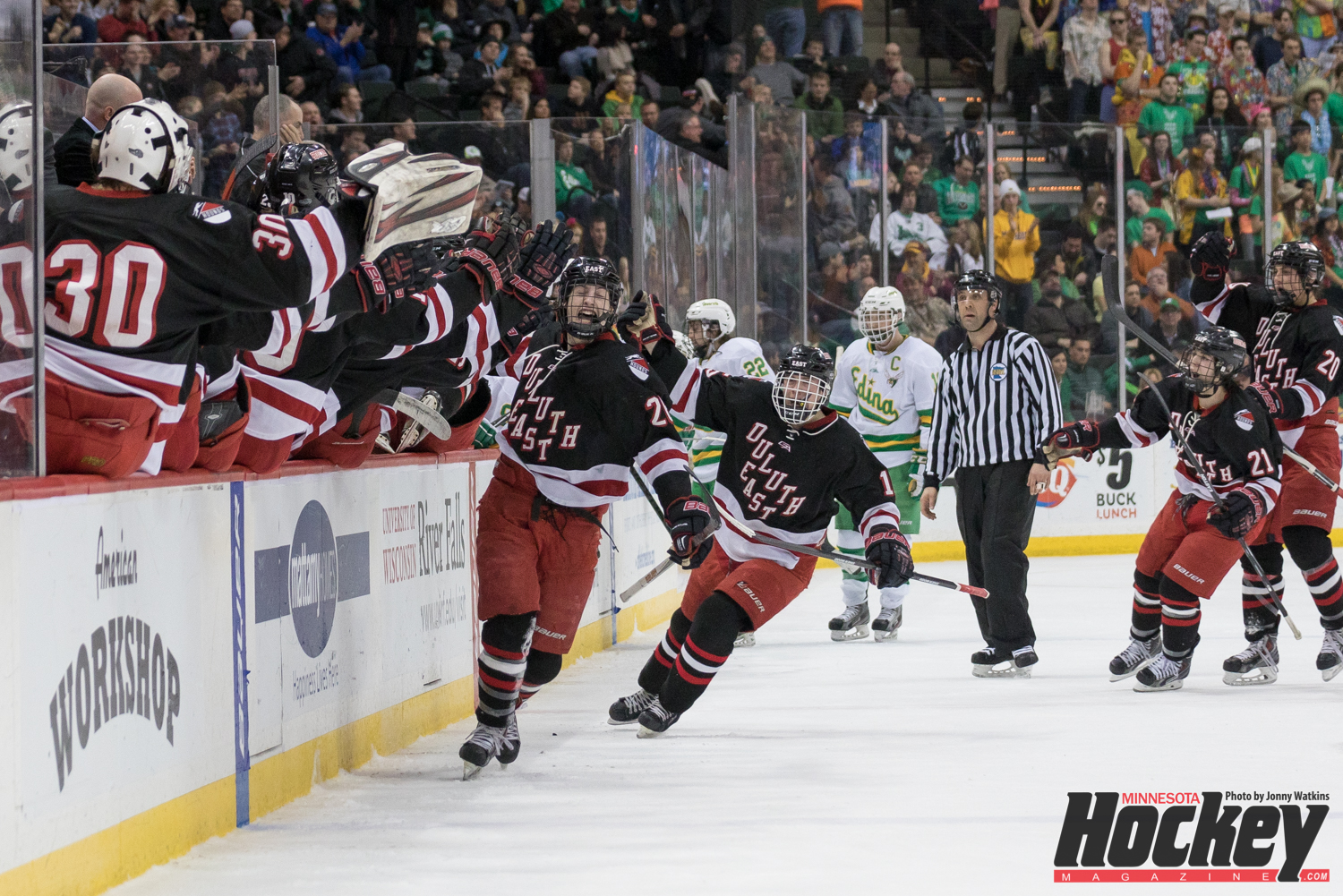 St. Paul — There will be no three-peat.

Unseeded Duluth East played spoiler for the second time in as many games in this state tournament, as it handed No. 2 seed, and two-time defending champion, Edina a 3-1 loss in the Class 2A semifinals Friday night at the Xcel Energy Center.

“I think we believed right from the get-go tonight,” senior Nick Altmann said. “We never gave up.”

A day after Duluth East (16-10-4) came back from a 5-2 deficit to upset St. Thomas Academy in overtime of the quarterfinals, the comeback kids did it again, handing Edina (25-2-2) only its second regulation loss this season. Still, the tournament seedings didn’t seem to faze Duluth East coach Mike Randolph.

“I didn’t think it was an upset,” he said after Friday’s game. “We’re finding a way. I think at moments … we locked in.”

It was Edina that struck first, on a goal with a sharp deflection. Senior Patrick Haug camped out in front and redirected senior Ben Foley’s point shot.

A few minutes later, Duluth East tied it up on the power play. Junior Luke Dow got the puck behind the net and quickly came out front for a wrap-around goal. Randolph said he thought his team came out nervous but adjusted after Dow’s tally.

“We popped one,” Randolph said. “I think the guys kind of settled in.” 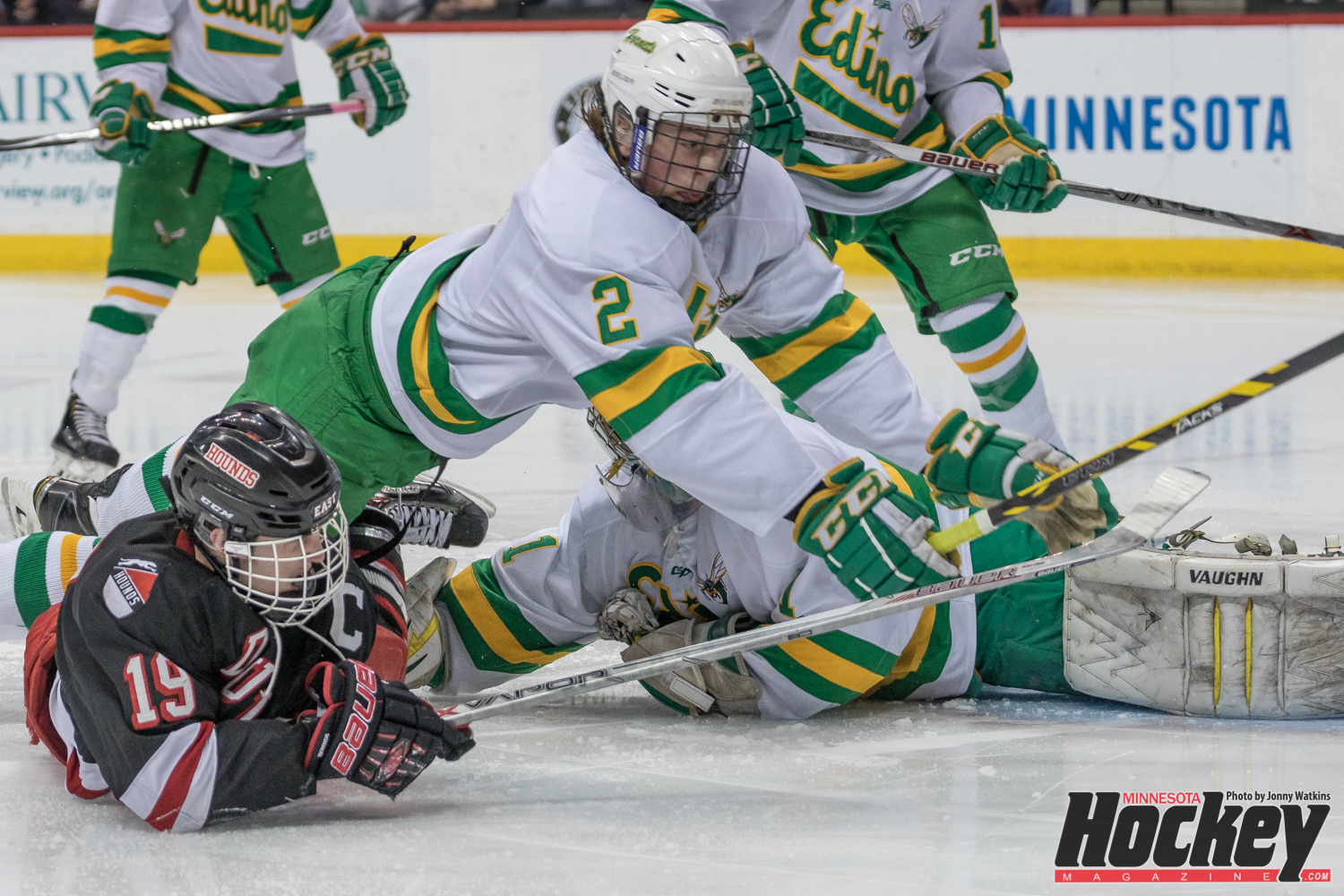 Duluth East’s Nick Altmann watches the puck go in the Edina net after his diving shot eluded Edina goaltender Kobie Boe in the second period of the Greyhounds’ win over the Hornets on Friday night at Xcel Energy Center. (MHM Photo /Jonathan Watkins)

The Hounds didn’t waste any time, 31 seconds to be exact, settling in and then grabbing the lead in the second period. Edina failed to clear its zone, and a shot bounced off the front of Edina goaltender Kobie Boe. A diving and outstretched Nick Altmann put the puck past the sprawling goalie for the 2-1 lead.

“It was a dirty one,” Nick Altmann said. “I just had that second effort and dove for it.”

Junior Ash Altmann put the game away with 2:41 left in the third. He used a backhand move to put the puck upstairs. The building went crazy. A stoppage with 3.7 ticks on the clock brought a cheering crowd to its feet.

“It was unbelievably loud,” Ash Altmann said, of the final minute. “You could barely hear yourself talk.”

The Hornets played their semifinal without their leading scorer. Senior Dylan Malmquist was injured during the quarterfinal game when a puck hit him behind the knee.

“I went out there, tried to skate and just couldn’t go today,” Malmquist said.

It hurt not having him play with the team, said Edina coach Curt Giles, because Malmquist knows how important he is to the Hornets.

“Life’s full of curve balls, you know?” Giles said. “Next thing you know, he can’t play.”

Duluth East, making its seventh consecutive state tournament appearance, placed sixth last year. If they come out victorious Saturday, it will be the fourth title for the Greyhounds, having last won in 1998.