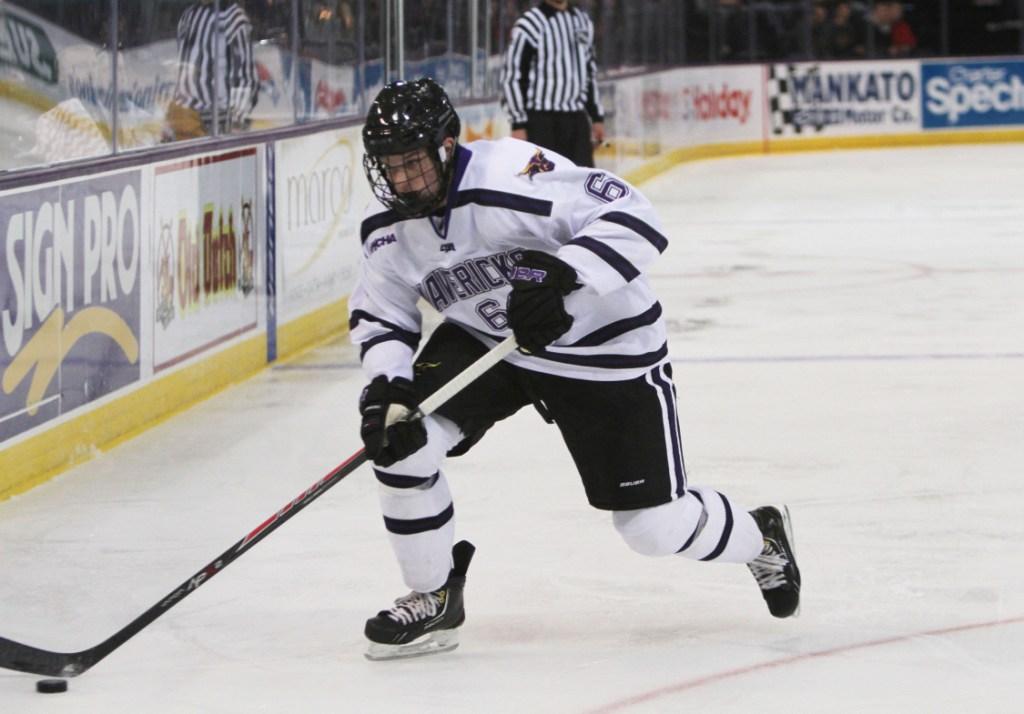 Casey Nelson is the Maverick that nearly wasn’t.

With his days in the North American Hockey League dwindling, it came time for Nelson to make a commitment to a school. There were several interested — including Ohio State and both Alaska schools.

Nelson had his final three picked — Massachusetts-Lowell, Connecticut and Quinnipiac — when Minnesota State called and offered him a spot.

“I knew I wanted to follow in his footsteps,” the younger Nelson said. “It worked out.”

Casey followed Josh out of Wisconsin to juniors. Josh played three years in the NAHL, the final year and a half with the Fairbanks Ice Dogs.

Casey played three years in the NAHL too, the first two with the Alaska Avalanche.

He grew a lot in those years, both in maturity and size. At 5-10 when he graduated high school, Nelson hit a growth spurt his last season in the NAHL when he played for the Johnstown Tomahawks, growing to 6-1.

Like many smaller blueliners, Nelson was never the most physical defenseman growing up. Without the size to back up a physical brand, Nelson said he was more of an offensive-defenseman.

But as soon as the size came, so too did interest from college teams.

“I really didn’t hear from many schools until my last year in juniors,” Nelson said. “[Size] was definitely a big part of it.”

His final year in Johnstown, Nelson scored 10 goals and 22 assists in 56 games. The 32 points were six more than his first two seasons in the NAHL combined.

He arrived in Mankato, seemingly on the verge of blossoming into an every-night defenseman. But as is often the case, things never work out how they’re supposed to.

Nelson was a part of a veteran defensive core. He was injured early in the season. When he came back, he struggled and his confidence wained.

“I was thrown into the mix and given too many roles than I could handle,” Nelson said. “I was out there 5-on-5, power play and penalty kill. With no experience it was kind of tough to handle. It caught up to me, mentally and physically.”

Nelson had a good WCHA Final Five tournament and played in MSU’s NCAA Tournament game, a 2-1 loss to Lowell, gaining important experience. There were only a couple of things he was missing.

“Strength and confidence,” said Mavericks coach Mike Hastings. “As a freshman, one of the things he was lacking was attainable and it was strength. I believe he thinks it well, he’s a good skater, he just needed to be able to sustain some shifts. He just needed some time to attain some strength.”

Knowing that, Nelson spent the offseason working with MSU strength coach Tom Inkrott. He grew another inch and added 10 or 11 pounds.

“We gotta have one of the best trainers in all of college hockey,” Nelson said of Inkrott. “He puts us through some of the best workouts and gets us in ridiculous shape. He transforms your body. He definitely deserves all the credit in the world.”

Nelson said he got up to over 190 pounds during the summer before backing off a bit before the season. His current playing weight is anywhere between 183 and 185 pounds, which has helped him during a breakout sophomore campaign.

But being small for so long has helped Nelson become a more well-rounded player.

“I’ve been that small guy, so I always felt like I had to do things differently than I do now where I have a little more leverage on smaller guys,” Nelson said. “When I was smaller, I used my feet more so definitely having that length and some more pounds helped.”

Nelson got some early confidence too, scoring a goal in the season-opener at Nebraska-Omaha and assisting on goals in each game against Minnesota Duluth the following weekend.

The points haven’t slowed down either.

Nelson ranks tied for fourth on the team with fellow defenseman Zach Palmquist with 19 points (5-14–19). The duo leads all WCHA blueliners in points and are among the national leaders in that category as well.

“The mental side of getting my freshman year over with. It was definitely a learning experience,” Nelson said. “I’ve learned from all the older guys.”

In that regard, Nelson said he has taken the most from Palmquist, a senior from South St. Paul who has long been one of the more effective offensive-defensemen in the WCHA — even before the conference re-aligned prior to last season.

“I take so much out of his game and try to apply it to mine,” Nelson said. “He’s so solid back there, so smooth and still so unbelievable defensively.”

Nelson and Palmquist, along with perhaps the deepest group of forwards in the country, are a big reason why the Mavericks enter the weekend third in the country in goals per game (3.74).

But along with an unheralded group of defenseman that might be just as deep, and goaltenders Stephon Williams and Cole Huggins, Nelson and Palmquist are a part of a crew allowing only 2.09 goals per game — tied for eighth-best in the nation.

With Matt Leitner, Bryce Gervais and Jean-Paul Lafontaine getting recognition as three of 59 players fans can vote on for the Hobey Baker Award, MSU’s defensive core is as balanced and talented as it is unheralded.

“He takes pride in defending,” Hastings said of Thompson.

Having seven guys for six spots means it’s a weekly competition in practice to see who gets a spot in the lineup. Hastings said it’s a conundrum that has made the team better.

“That’s the best environment to have,” Hastings said. “The opportunities are there if you earn them.

“I know people don’t notice that group as much as we do as a [coaching] staff or the forwards in the locker room. I like the attitude. They don’t mind being unnoticed and just doing their jobs. They’re pretty low-maintenance guys.”

Top-ranked Minnesota State will look for its first ever win at the Xcel Energy Center this weekend, beginning Friday against No. 17 Minnesota. The Mavericks are 0-7 all-time in St. Paul, including a pair of losses last year at the North Star College Cup.