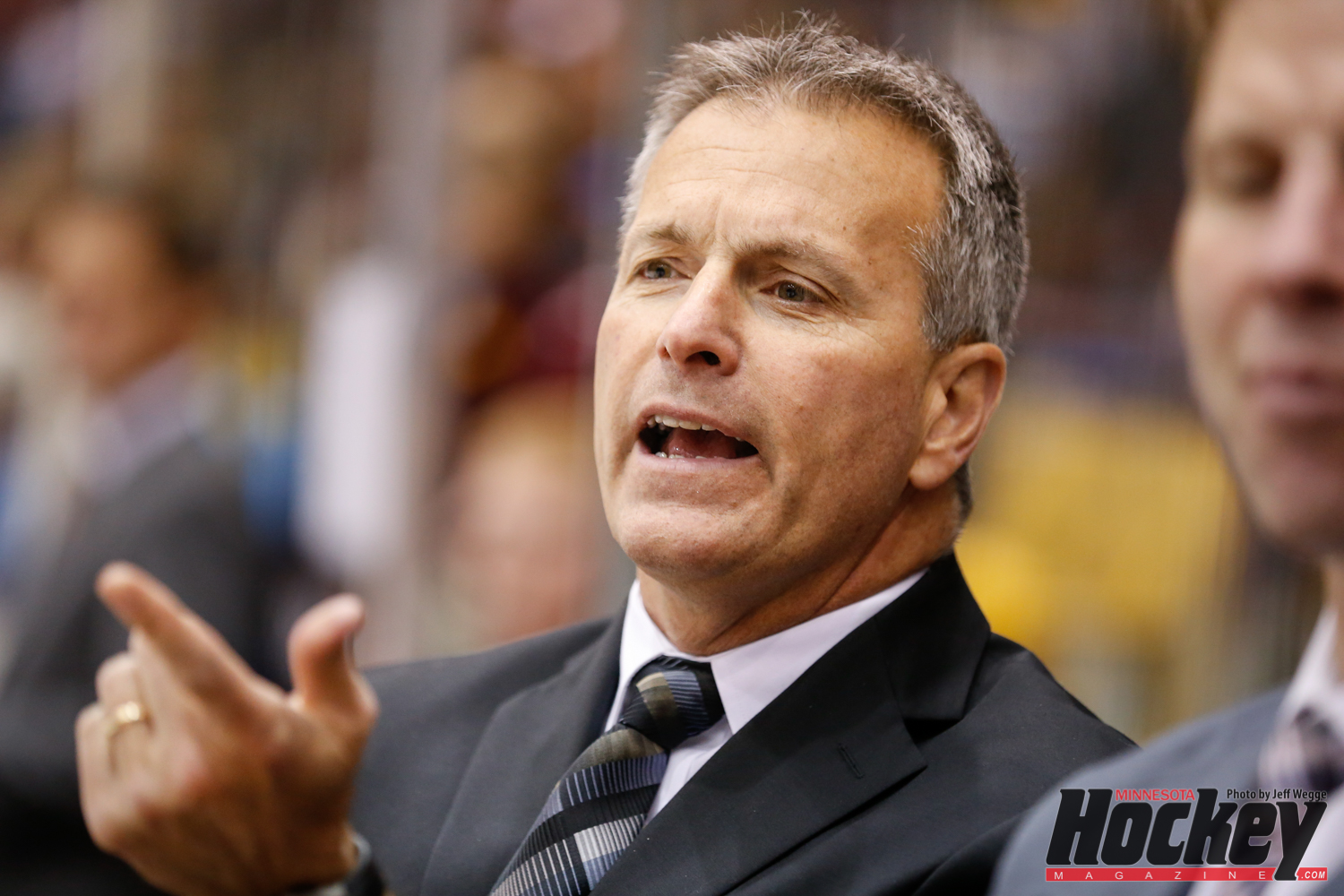 High expectations are the norm at Mariucci Arena. Minnesota has raised four straight conference title banners, earned four straight bids to the NCAA tournament, and led the nation in total wins over the last four seasons. Coach Don Lucia has 674 wins over his 29-year career, but he’s still looking for his first one of 2015-16.

Growing pains have become a buzzword for the coach and players as they’ve forced 10 new players into a lineup that has fallen to Vermont (0-3) and were swept by Minnesota Duluth (1-3, 0-3). Lucia expected it might take some time to get his young players up to speed, but he didn’t expect to be winless headed into their third weekend.

The coach says his team has practiced better than they’ve played in games, but here are four things they need to solve to earn a W.

Minnesota lost two key puck moving defensemen to professional contracts after last season. Mike Reilly signed with the Minnesota Wild and Brady Skjei signed with the New York Rangers, and those two players gave weekly instructionals on how to get the puck out of the defensive zone.

Jake Bischoff, Michael Brodzinski, and Ryan Collins got some experience last year for the Gopher blue line, but none of them were relied on to get the job done shift after shift. Now Steve Johnson, Nick Seeler, and Jack Glover, who played forward for the majority of last season, are also playing regular shifts in the top six.

“For us the most important thing is getting up the rink efficiently and not choppy,” said Lucia. “It seems breaking out, in the neutral zone, regrouping… it’s been choppy and we’ve had little offensive zone time.”

Minnesota needs to find a way to generate speed coming up ice and that starts with a good first pass from their defensemen. The Gophers struggled against a 1-2-2 trapping forecheck against Vermont and then again when faced with an aggressive Bulldog forecheck. They’ll likely see something in-between against Northeastern, and making quick, crisp passes is a key coaching point for Minnesota.

Get Pucks to the Net

The Gophers have been outshot in each of their first three games this season, but it’s not for lack of shot attempts. For example, the Gophers had more shot attempts than Minnesota Duluth Saturday, except only 21 of their 64 attempts hit the net.

“When you miss, there is no second shot opportunity,” said Lucia. [We need to] create some chaos in offensive zone where guys have to chase down pucks and lose some of their defensive structure.”

Captain Justin Kloos thinks that maybe he and his teammates have put too much pressure on themselves, and forcing plays that aren’t there.

“It’s just moving the puck a little quicker, making a little quicker decisions, and relying on our teammates a little more,” said Kloos. “I think a few times, plays have been a little too individual and that’s slowed down the offense. Even when trying to get pucks back if everyone has to stop to watch to see what you’re doing, it kind of slows everything down.”

Expect to see Minnesota focus on generating second shot opportunities this weekend instead of missing the net. Seeler noted that the defensemen will also emphasize getting pucks on net when they can, getting pucks low, and getting pucks off the side boards when shot blockers take away shooting lanes. 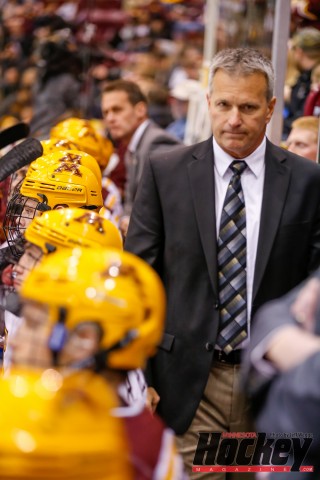 The Gophers have averaged almost 23 shots a game this season, but they’ve lacked any sustained pressure. Whether it’s players missing the net or turning the puck over on zone entries, Minnesota has had too many one and done offensive opportunities.

Lucia said after the first weekend his team didn’t manage the puck well, didn’t support the puck well, and weren’t strong enough on their sticks. While he allowed it could be a strength issue for some of his freshman thrust into the lineup, the entire team’s wall play has to be better if they want to be successful.

“There’s a new formula this year and last year was obviously different–we had guys like [Kyle] Rau and [Travis] Boyd–guys to lean on and this year we just have got to get used to it and not put too much pressure on ourselves,” said Kloos. “We’ve been doing this a long time and everyday we just got to realize we’re pretty good at this game and we can rely on our skill, effort, and make some plays.”

While Rau has moved on to the Florida Panthers organization and Boyd to the Washington Capitals organization, the Gophers are looking for new players to take the lead. Lucia has noted the fourth line of A.J. Michaelson, Darian Romanko, and Tyler Sheehy do a nice job grinding in the offensive zone, but the coach will need his top nine forwards establishing a presence in the offensive zone to get more goal scoring.

Minnesota had one of the most prolific power plays in the country last season, but this season they’re still looking for their first power play goal through 12 opportunities. Last year Reilly quarterbacked the group to a 28% scoring clip. This year, a couple different players have gotten looks running the top unit without anyone taking the helm.

“They need reps at D, Bischoff, Johnson, Brodzinksi, get pucks through and make quick decisions,” said Lucia. “I think that’s the thing, at times we’ve been a little bit slow or you saw last weekend Connor [Reilly] is getting his timing back with his shot, he’s heeled a couple, Vinni [Lettieri] is all set up and he breaks his stick. But I think we have some guys who can make some plays on the power play, now they just need to continue to practice and get reps.”

Minnesota doesn’t appear to have a high scoring offense this season, so they will need to win a lot of 4-2, 3-2 games. Getting goals most nights on the man advantage will be crucial if they’re going to be successful. Breakouts and establishing a presence in the offensive zone hasn’t been a problem during the first two weekends, but moving around the puck quickly, decisively, and cleanly has been.

Lucia hasn’t had to worry too much about his goaltending so far this season despite the loss of three-year starter Adam Wilcox to the Tampa Bay Lightning organization. Eric Schierhorn has started three consecutive games and has made all the big saves and routine saves that the coaching staff expects of him. Lucia said earlier this season that he wanted to get one of the other goalies a chance sooner rather than later, but his team’s struggling offense and Schierhorn’s .915 save percentage might push that decision past their Friday/Saturday weekend series against Northeastern.