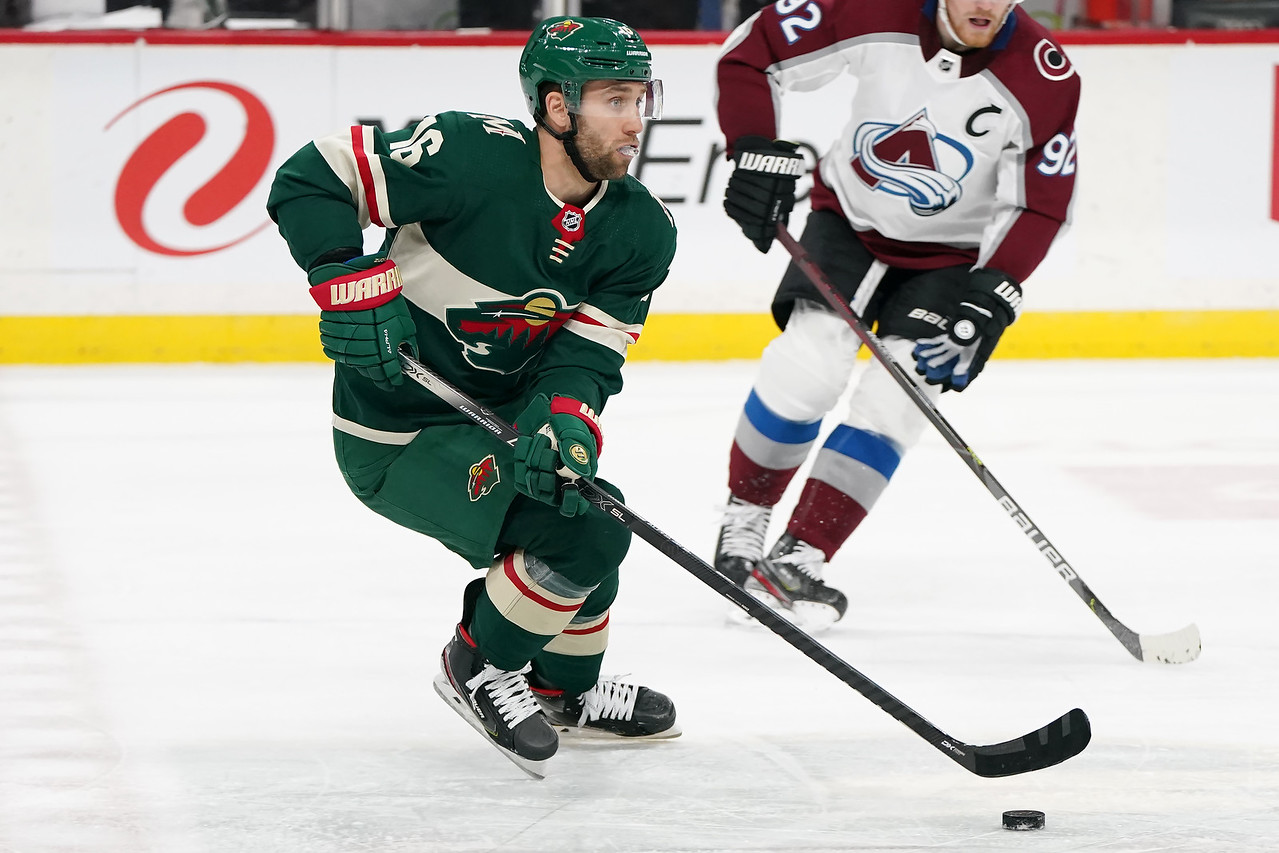 ST PAUL – The first accomplishment was signing Minnesota Wild defenseman Jared Spurgeon to a seven-year contract extension. But that was just before the season for new Wild general manager Bill Guerin. As the Wild started the year 0-4 and went through the usual up-and-down stretches for a team trying to stay relevant in the playoff hunt, Guerin was patient. He observed his new hockey club.

At an early-November Wild practice, he preached that patience when asked about what he wanted fans to know regarding what he was trying to accomplish in Minnesota.

“I guess my message and my hope would be that they (the fans) understand that this is a great organization, we’ve got great guys,” Guerin said in November. “That some patience might be required here.

“But, we’ll do everything in our power to have a great team.” 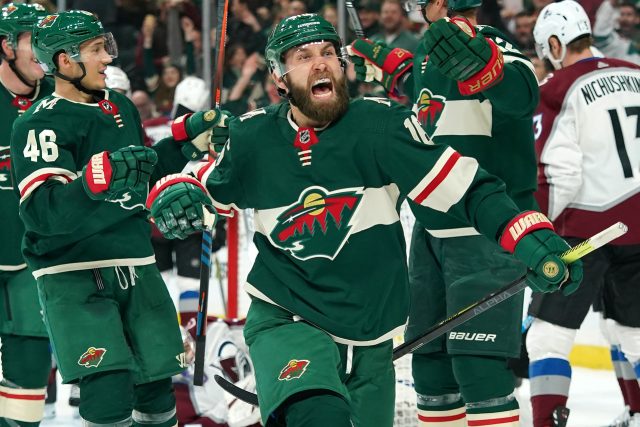 Monday night, Guerin made a significant move in trading away winger and local fan-favorite Jason Zucker to the Pittsburgh Penguins. In return the Wild received young, junior defenseman Calen Addison, a 2018 second-round NHL Draft pick of the Penguins; a conditional first-round pick in the 2020 NHL Draft; and left winger Alex Galchenyuk, who suited up with the Wild on Tuesday against Vegas in front of 17,112 fans at Xcel Energy Center.

The 25-year-old Galchenyuk has five goals and 17 points in 45 games with Pittsburgh this season, including six power-play points. But his ice time was pretty low recently, registering less than 10 minutes a game in his last five with the Penguins. Having arrived Tuesday afternoon in St. Paul without a chance to skate with his new team before taking the ice for a game, he skated 12 minutes, 26 seconds across 18 shifts on a line with Luke Kunin and Mats Zuccarello.

After hearing the trade news, Galchenyuk said the adrenaline kicked in and he couldn’t wait to join his new team.

“It felt good today,” Galchenyuk said. “Obviously with the travel and all that, it was a little rough. But it was nice to get a lot of ice time.”

Galchenyuk has some good skill, said coach Bruce Boudreau on Tuesday night, adding that once Galchenyuk gets comfortable, he should be fine. He made his NHL debut during the 2012-13 season with Montreal as a teenager. His best season came in 2015-16 when he scored 30 goals and 56 points – both career-highs – in playing all 82 regular-season games. But his goal-scoring production fell into the teens the past few seasons.

“I know I can put the puck in the net,” Galchenyuk said. “It’s just, for me, working on it and keep building my confidence.”

He added that he needs to stay positive, despite being bounced around with different teams the past few years. He said he knows the type of player he is and what he can bring to a team.

“He just wants to come in and play and prove himself,” Guerin told the media Tuesday morning. “He’s one of these young kids that come into the league and instantly had a major impact the last year-and-a-half.

“Maybe (it) hasn’t gone the way he’s wanted it to. That’s our job is to help build him back up and resurrect his career and find his scoring touch again.”

Wild forward Marcus Foligno recalls playing against Galchenyuk a lot when Foligno was in Buffalo and Galchenyuk in Montreal. Foligno called his new teammate “a stud.”

“He’s got great vision out there,” Foligno said. “He can shoot the puck. He’s only going to get confidence here. We want him to be the player that he is.”

While Galchenyuk might be getting a fresh start in Minnesota – this is his fourth NHL stop in three seasons going from Montreal to Arizona to Pittsburgh to Minnesota – Zucker will start anew out east. The 28-year-old winger has never known an NHL career outside of the Wild organization, the place he was drafted in the second round (59th overall) in the 2010 NHL Draft. 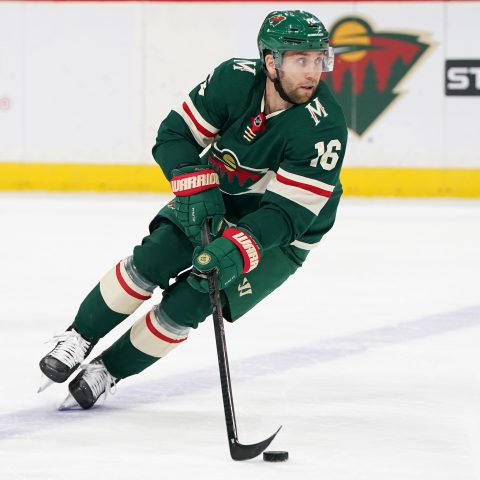 He leaves Minnesota having played 456 games and scoring 132 goals and 243 points. He scored 14 goals and 29 points in 45 games with the Wild this season, while missing some time after he broke his fibula in December. Zucker also leaves behind a legacy in Minnesota with his #GIVE16 campaign benefiting the University of Minnesota Masonic Children’s Hospital.

Once news of the trade broke on Monday, reactions came across from fans and local media members on social media. Local newscasts dug out footage of previous Zucker stories they had done, usually having to do with some of his work in the community.

“Not only a locker-room-favorite guy but a community, a city and a state-favorite got sent out of here,” said Wild goaltender Alex Stalock. “That kind of sends a little wave through the locker room.”

If Zucker’s now-former teammates were bummed about the trade, they didn’t show it on the ice. Or maybe the trade made some of them realize how quickly things can change if they don’t play well themselves. Guerin said Tuesday morning that he didn’t “expect any lulls” from his team.

At any rate, the Wild put on a dominant showing for their home fans Tuesday night with a 4-0 victory over the Vegas Golden Knights. The Wild’s surging power play tallied three with the man advantage, taking a 2-0 lead in the first period on power-play goals from Joel Eriksson Ek and Jared Spurgeon. Kevin Fiala added a hard-working goal to make it 3-0 midway through the game, with Zach Parise earning his career assist No. 400 on the play.

Parise scored his 21st of the season later in the second for the 4-0 lead, another power-play goal, and that held up as the final goal of the night.

Stalock made some stellar saves in goal and improved to 14-8-3 on the season and set a new career-high with his third shutout this season. He’s also 5-2-1 in his past eight starts. Though Stalock noted that trades are never normal, he acknowledged how quickly things can change.

“It’s a wake-up call,” Stalock said. “I think you saw tonight, guys don’t want to be that guy going out the door.”