Hamline’s Simon builds business, one scoop at a time 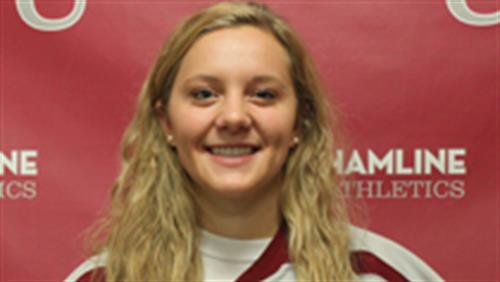 Hamline women’s hockey player needed a summer job that fit her schedule,
so she took matters into her own hands by opening her own ice cream truck.

SAINT PAUL, Minn. — Keeping busy is not a problem student-athletes face.  In fact, most will tell you time management is one of the greatest lessons they learn.  With school, practices, workouts and socializing with friends, finding time to add anything else into ones busy day seems almost impossible.

When summer approaches, students are able to take a big sigh of relief knowing their days will no longer be spent in a classroom and instead in a more relaxed atmosphere free of tests and deadlines.  Many opt to find summer jobs to fill their time and increase their funds.  For some student-athletes the summer consists of continuing workouts and practices.  With one’s times already being filled with those activities, finding a job that works into that schedule can be a challenge.

This past summer Breanna Simon, a freshman women’s hockey player at Hamline University, decided to take matters into her own hands when it came to finding a summer job.

“I am not one to sit around and complain,” she said.  “I don’t believe that solves anything.  If you want something, you have to do it yourself.”

Most employers need to know employees availability weeks in advance but with a schedule that had her busy from 9 a.m. to 5 p.m. consisting of workouts, on-ice practice and summer classes, she needed a job that would work for her and not the other way around.

“I did not have time to work the typical hours that are asked of people in a ‘normal’ workplace,” Simon said.  “I needed a job that was flexible.”

Realizing that finding a job to fit her schedule was going to be almost impossible, Simon did something most people only dream of; she opened her own ice cream truck, Bee’s Ice Cream.  Created with a little inspiration from a high school friend who owned his own ice cream truck, Simon began researching and looking into all aspects of getting her own business running.

Simon began the process of starting Bee’s Ice Cream by looking into the costs of the items she would need.  During her research, she discovered that her business venture could end up being very profitable – all she needed was a truck.

With the help of her sister, Simon found an old FedEx truck on craigslist that seemed to fit the needs of her business.

“I told my parents and originally they thought I was crazy but they supported me and drove the three hours to look at the truck the next night,” she said.

On her visit to check out the truck, she realized it would work perfectly for what she needed, so she bought it right there on the spot.  There were some modifications that needed to be made in order for the truck to be functional to sell ice cream.  Adding a window in the back to interact with customers, installing electricity for the coolers and repainting both inside and outside were some of the bigger changes that needed to be completed before opening for business.

In addition to those modifications, Simon needed to get a license in order to operate her business and sell ice cream.  With all these tasks in front of her, the idea of, “Many hands makes lighter work,” came into play.  Luckily her parents, who at one point thought she was crazy, now were in full support of helping their daughter.  Simon’s entire family pulled together to get all of the work done in what seemed like a short amount of time.

“Without [my family] I never would have gotten [the renovations] done so fast,” Simon said.  “It’s crazy to think that I thought up, created, and had my own business running within two-and-a-half months.”

Stocked with 52 different kinds of ice cream, Bee’s Ice Cream would cruise the neighborhoods of New Richmond, Wis. at five miles per hour.  With everything from bomb pops to fruit bars, customers were guaranteed to find something they enjoyed.

In hope of reaching as many ice cream lovers as possible, Bee’s Ice Cream could be contacted if someone wanted to suggest a neighborhood for Simon to regularly visit, or if her service was in need at local events such as birthday parties, family reunions and tournaments.

From Ice Cream to Ice Hockey

Summer has come and gone, and as winter arrives, Simon’s focus has shifted from ice cream to ice hockey.  This fall she started her freshman year at Hamline as a Piper women’s hockey player.  The hockey season is now under way, and Simon has many things she is looking forward to.

“Personally, I am looking forward to scoring goals, winning games and being an impact player on a great team with great coaches,” she said.

Simon also recognized that she is a part of a program on the rise, which is one of the reasons why she chose to attend Hamline.

“I wanted to be a part of a growing program that I could help,” she said.  “We have great potential and I am excited to see what the future holds for us.”

Currently the Pipers are 1-5-2 overall, and 0-3-1 in MIAC conference play.  Two of Hamline’s MIAC losses have been by one goal, with the other by two goals, and their win is a big one – a 2-0 nonconference victory over St. Catherine’s, which is undefeated in MIAC play thus far.  Simon and her teammates will try to earn their first conference win of the season with a big series coming up against Bethel.  The Pipers host the Royals Saturday at 7 p.m., and wrap up the series on the Royals’ home ice Saturday at 3 p.m.  Simon has appeared in all eight games so far in her rookie season, with one assist and one point to her credit.

When asked what her team thought of her summer job, she explained, “They think it’s pretty cool and ask if they can get ice cream.”

The support and encouragement Simon received in regards to her business is something that has carried over to her career on the ice.  Before starting at Hamline, she recalled that everyone was extremely nice and inviting during a campus visit, describing staff and other students as being, “overwhelmingly supportive.”  It has become obvious that there are many people cheering for her both on the ice, and in her business venture.

Owning her own business has taught Simon a lot about managing money and working with other people – tools that will definitely be useful in her future endeavors.

Simon said something she realized throughout her summer is that, “You really can do anything if you put your mind to it,” which is a valuable lesson she can be utilize in all aspects of life.

What started out as just a summer job has sparked the idea of possibly expanding her business with other products.  As of right now, Simon does not think she will be selling her truck anytime soon.

“I definitely intend to keep doing Bee’s Ice Cream in future summers,” she said.  With her sights set on attending medical school in the future, the guarantee of having a job to help pay for school is a definite plus.

“It probably won’t [ever become] a full time job for me,” said Simon, “but I would like to keep it running, and maybe even pass it on in the family.”

Between the start of her collegiate hockey career at Hamline and her entrepreneurial success at such a young age, Simon certainly has plenty to be happy about.  However, the joy that Bee’s Ice Cream has brought to its customers has been her biggest profit.

“I think the most rewarding thing I have learned,” she said, “is how happy ice cream makes people.”