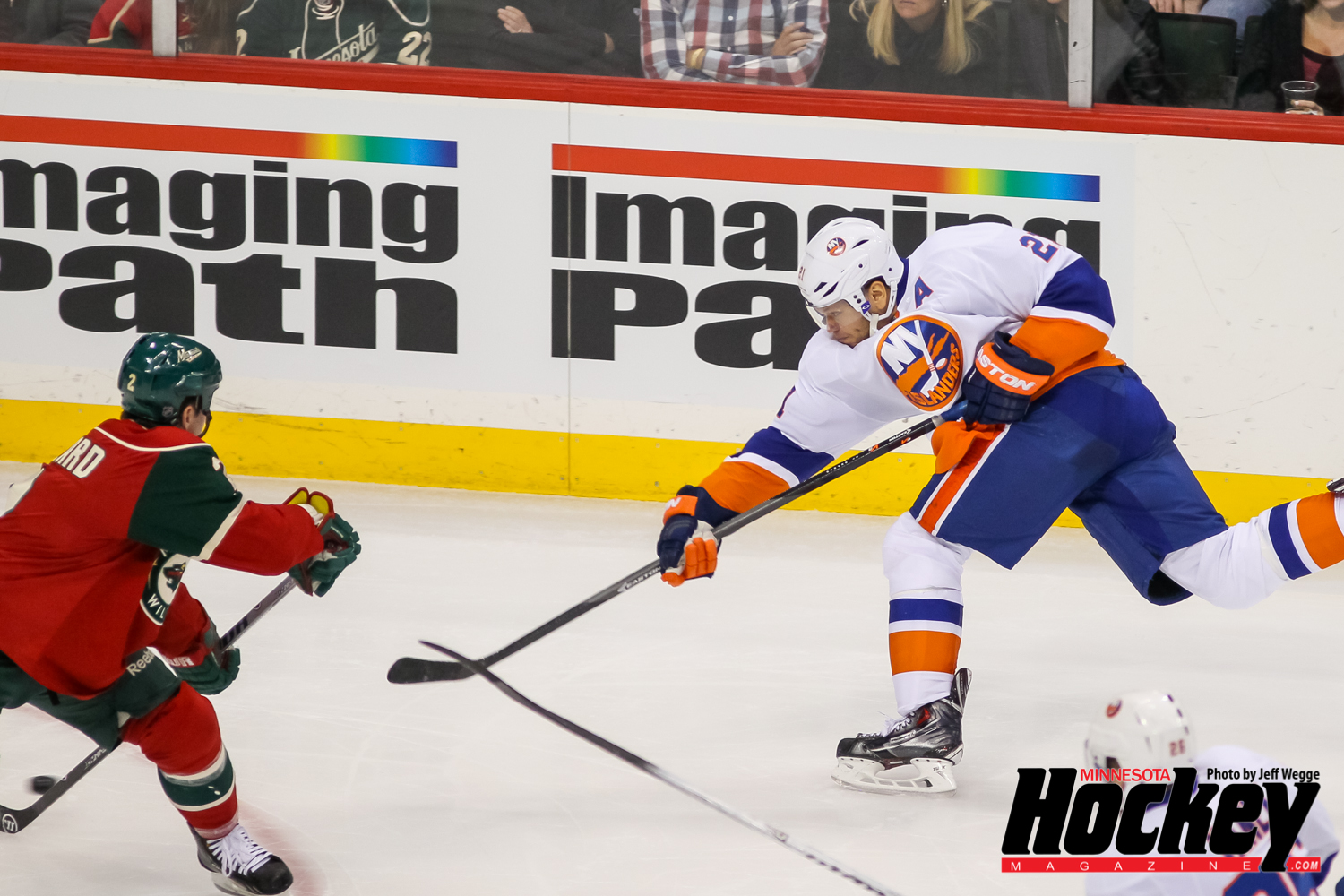 The Minnesota Wild “welcomed” home a few of the state’s prodigal sons, native and adopted, on Sunday night at the Xcel Energy Center as the New York Islanders iced a lineup featuring Minnesotans Kyle Okposo (St. Paul/University of Minnesota), Brock Nelson (Warroad/North Dakota) and Aaron Ness (Roseau/Minnesota) along with ex-Gopher Thomas Vanek and former Wild winger Cal Clutterbuck. The homecoming was a happy one for the visitors in the Islanders’ 5-4 come-from-behind victory over the Wild. 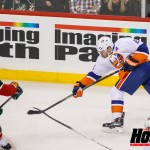 Featured Image:
Kyle Okposo scores the first of two go-ahead goals in the third period of the Islanders 5-4 win over the Wild on Dec. 29, 2013 in St. Paul.
(MHM Photo/Jeff Wegge)

All but Ness registered points as they combined for seven points (3-4–7) and 12 shots while finishing a +3 as the Islanders spotted Minnesota a three-goal lead before outscoring the Wild 5-1 over the game’s final 37 minutes in front of the 18,851 announced in attendance. Okposo led the way with the Isles final two goals and chipped in an assist for his first NHL points in his fourth professional appearance in St. Paul.

Okposo said the Islanders did a good job of dictating the play in the third period, something he had a lot to do with scoring two go-ahead goals in a 1:59 span culminating with the game winner with 5:48 to go.

“It was a good one to leave the hometown fans with,” Okposo said with a grin. “I heard about five or six cheers in the audience when I scored, but it’s nice to come home and get a win like that.” 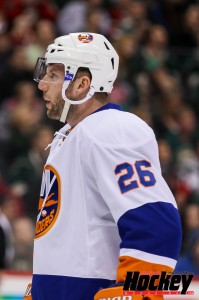 Islanders coach Jack Capuano praised his top line of Okposo, Vanek and John Tavares who conspired to produce six points (3-3–6) between them on the night.

“The first period they really struggled and were trying to do a little bit too much,” Capuano said. “In the second and third they got back to playing how they know to play. They generated a lot in the offensive zone and the puck protection was great. Their skill really showed.”

Clutterbuck, who accumulated a franchise-leading 1,457 hits in 346 games over parts of six seasons with the Wild, scored his fifth of the season with 1:02 to go in the second (assisted by Nelson) providing the Islanders with a huge momentum boost heading into the final period.

“We kind of gave ourselves a kick in the butt here in the room and decided to kick it into high gear,” said Clutterbuck, the 26-year-old former Wild fan favorite who returned for the first time since being dealt on draft day, along with a 2013 third-round pick, in exchange for Nino Niederreiter.

“It was different—it was a little odd and almost had a training camp split squad feeling to it—but it was good,” Clutterbuck said of his triumphant return. “I didn’t know what to expect, but it ended up working out pretty nice. 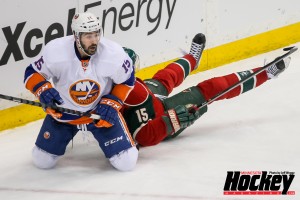 “There’s a little bit of nostalgia but my mind has been so focused on this team and where we at that it’s nice to be back, but it’s nice to turn the page too.”

Niederreiter, selected No. 5 overall by the Islanders in the 2010 NHL Draft, was mostly relegated to fourth-line duties during his time on Long Island and his production—two goals and one assist in 64 games over parts of two seasons—reflected that. But Sunday he joined Mikko Koivu and Charlie Coyle on the Wild’s top line and chipped in a goal and an assist in his debut against his former team.

But Niederreiter admitted Minnesota’s fifth consecutive loss—at home and to a team currently last in its division—tarnished any satisfaction he may have otherwise received from those two points.

“We lost, so that’s the frustrating part about it,” Niederreiter added. “It was our fault, we were up 3-0 and we let them push back.

“At some point, I feel like we stopped playing the way we should be playing, made too many hope passes and hope plays. That cost us the game.”