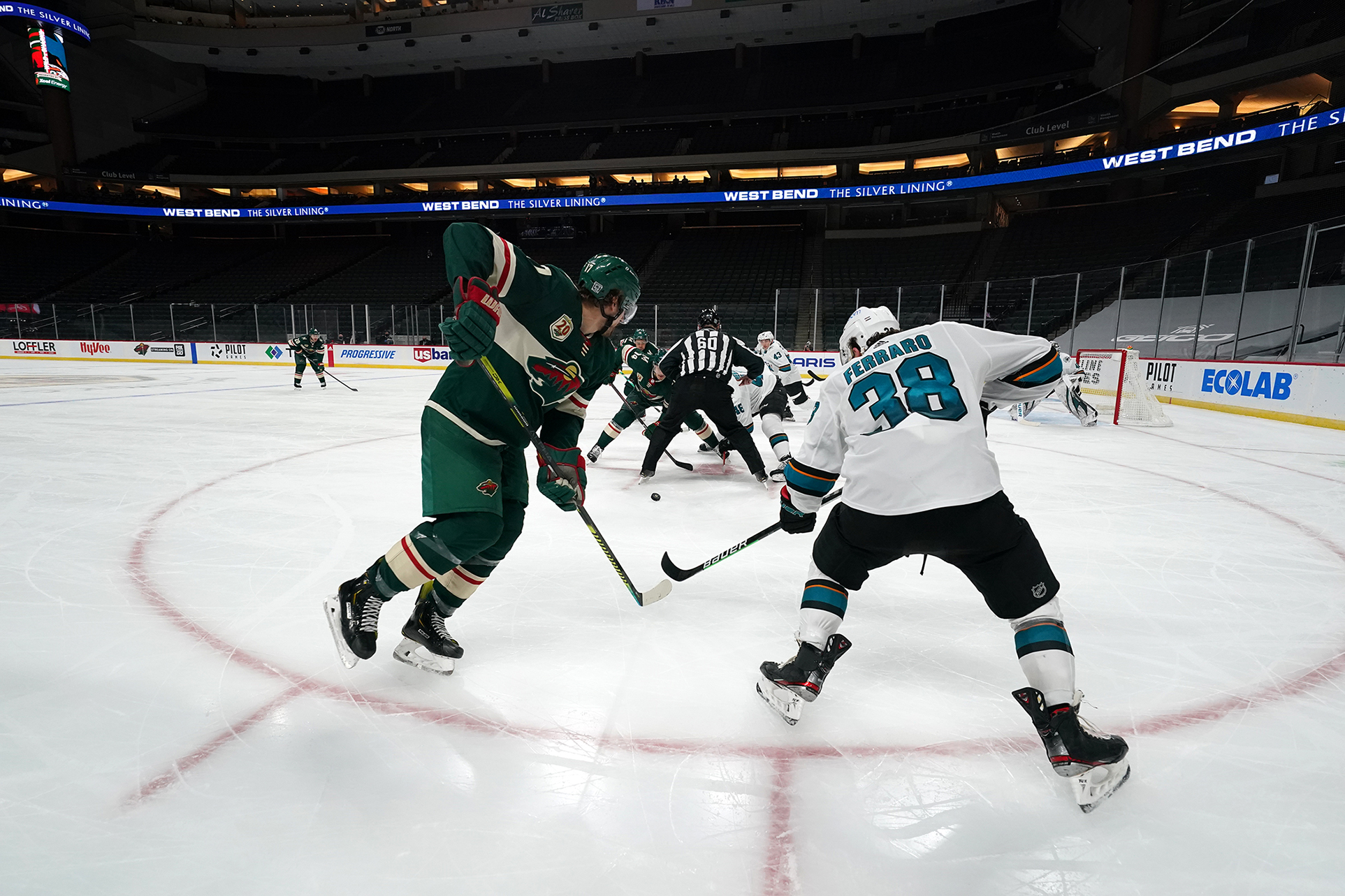 The Minnesota Wild faced off against the San Jose Sharks in the Wild's home opener on Jan. 22, 2021. (MHM Photo / Rick Olson)

Instead of a packed arena filled with 19,000 Wild fans for this season’s home opener Friday night at Xcel Energy Center, there were thousands of green seats, advertising banners pulled snugly over some of them, and a giant State of Hockey flag in one of the lower-bowl sections.

Such is sports life amid a pandemic.

“I’ve said it before, it’s pretty brutal, playing with no fans, especially on what should be a fun, exciting, entertaining, opening night,” said forward Zach Parise. “You miss having the crowd and that noise, so we’re looking forward to getting some people in the stands here.”

In perhaps the most Minnesota touch of all, the sections of seats behind each of the team benches were filled with various high school hockey jerseys that are normally displayed around the suite level concourse.

The venue hasn’t mattered much so far for the Wild, who won their home opener 4-1 over the San Jose Sharks following a successful four-game California road trip.

It was essentially a one-goal game in the third before Kevin Fiala scored his first of the season into an empty net with 1 minute, 16 seconds to play. Jordan Greenway, who already had four assists to his credit this season, added an empty-netter from center ice with 26 ticks on the clock.

“I don’t think we started great, but we were able to battle through, got some timely goals and when it got down to crunch time, we were able to get the job done,” said defenseman Ian Cole. 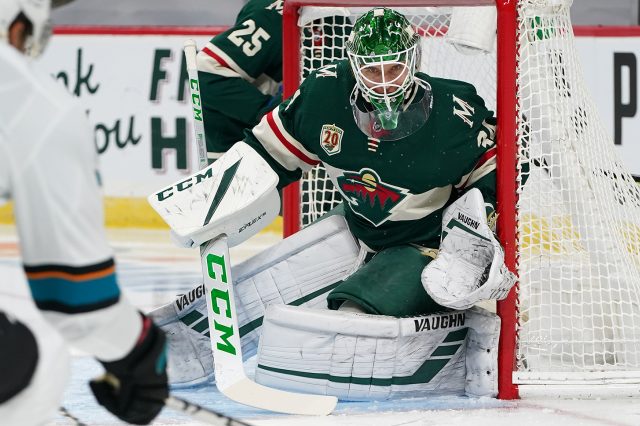 The Wild called on Kaapo Kahkonen in to finish the second and third periods after Cam Talbot left with an injury. (MHM Photo / Rick Olson)

In the Wild’s net, it was Kaapo Kahkonen who earned the victory, having come in to start the second period after starter Cam Talbot appeared to be in discomfort after a play late in the first period. Talbot finished the period and skated out for the second before turning the net over to Kahkonen.

Coach Dean Evason didn’t have an update after the game but said indications are that Talbot’s injury isn’t serious. Kahkonen said he had an idea he might be going in, after seeing what happened to Talbot.

“It’s more mental, I think,” Kahkonen said, of his preparation. “It’s not easy, but you just have to be ready for anything when you’re a backup goalie in a game.”

Joel Eriksson Ek, the team’s leading scorer, added his third of the season to get the Wild going five minutes into the game. On the dynamic line with Greenway and Marcus Foligno, Greenway put a shot on net and Ek was in front to take care of the rest and jam home the rebound. But the Sharks tied it 1:11 later on a Matt Nieto goal.

Minnesota lads Parise and Nick Bjugstad, in his first year donning a Wild sweater, finally got their names on the scoresheet with Parise’s second-period go-ahead goal Friday. Things had lulled even the pumped-in crowd noise into a bit of up-and-down the ice routine in the second period when Parise fired a blast on the Sharks’ net. Goaltender Devan Dubnyk stuck his left leg out for the pad save.

But on the same shift, Bjugstad fired the puck on net from the slot. Dubnyk didn’t grab it cleanly, and Parise pounced in his office in front of the blue paint for his first goal – and first point – of the season. Both Parise and Bjugstad had zero points coming into the game.

Parise said he didn’t feel guilty about scoring a goal against his former teammate. 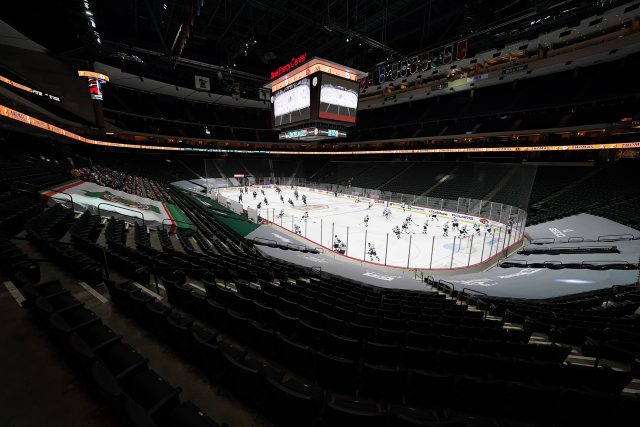 “He robbed me on that first one, so I guess we’re even because I don’t know how he kicked his pad out on that for what I thought was an open-net freebee,” Parise said.

That goal left the Wild heading into the second intermission with something they weren’t used to this season: A lead. They used comeback, overtime victories to win their first two games before getting shut out in their first game against Anaheim. The final game of the road trip was knotted at 2 apiece headed into the third, after the Wild had a two-goal lead.

The first half of the third period was pretty even, with the Wild not able to get much going on its third power play of the game. But really, not getting anything going on the power play has been the baseline for the Wild this season. They’re 1-for-23 in that category, although their first couple of games looked a lot better on the ice with the advantage than the stat sheet indicated.

The Sharks pressured a bit late in the game, but Kahkonen held his ground to get his second consecutive win in net.

There was one other move that should make highlight reels, despite the result. By now the hockey world got quite the introduction to Kirill Kaprizov, who had one of the most storybook NHL debuts ever with his three-point game and overtime winner in the season-opening victory in Los Angeles.

Friday, he dazzled with a move with a little more than 9 minutes to play in the third. Taking the puck into the offensive zone fighting his way through a defender, Kaprizov made an in-between-the-legs move with the puck and fired off a shot. Dubnyk made the save, but it was still a play worth a double-take and a gasp at that talent from Kaprizov.

Dubnyk was impressed, too, and glad he made the stop.

“I can’t believe he made that move,” Dubnyk said. “It’s a nightmare when somebody makes a move that’s that slick and puts it in the back of the net, and then you’ve got 365 days to watch it over and over again on the highlights.” 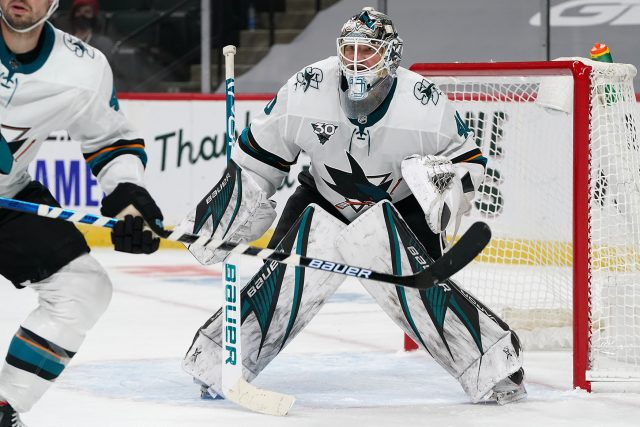 The Wild saw some familiar faces on the opposing bench. Dubnyk started against his old team for the first time. He propelled the Wild to some successful regular-season runs when he was acquired in a trade a few years ago. He finished his Wild career 177-113-28 with a 2.41 GAA and .918 save percentage in 328 games across six seasons from 2014-20.

Dubnyk took the loss to fall to 0-2-0 with his new team this season.

“I was a little fired up and overthinking stuff,” Dubnyk said. “I just wanted to give the guys a good chance.

“It would have been real nice to win, but it was nice to get it out of the way and feel like we played OK.”

Ryan Donato was also back to play his former team, though his stint in Minnesota was much shorter with his 18 goals and 39 points in 84 games across two seasons from 2018-20. Donato tied for a team-high five shots in the game but also ended up with a minus-3 next to his name.

Both Dubnyk and Donato received the video-tribute treatment on the videoboard at the arena for former players during breaks in the action.