#HartnellDown Camps Out in Minnesota 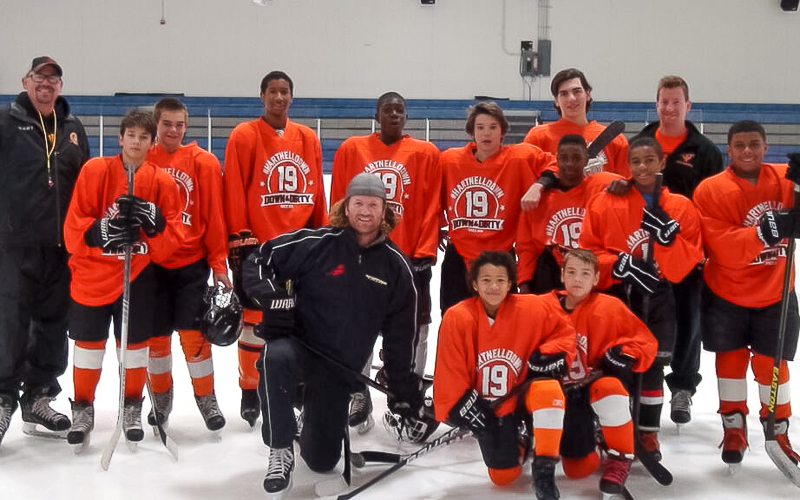 For Scott Hartnell it’s not just about raising money to send kids to camp, it’s being there to support them all the way through. We caught up with the left winger from the Philadelphia Flyers as he headed off to a week of camp in Brainerd, MN and this is what he had to say!

The view of the night sky from the grounds of Minnesota Hockey Camps is one unrivaled by any other place. Crystal clear and dark, the stars seem to shine and shimmer only for those lucky enough to gaze upon them from that very spot, a spot not unfamiliar to Scott Hartnell or the kids his#HartnellDown Foundation has been able to send to camp. As a matter of fact, Hartnell’s most touching memory to date involving the foundation has to do with this very sky.

Says Scott, “We had about 13 kids come from Philly through the Ed Snider Youth Hockey Foundation and we were hanging out after dinner one night and I saw a couple of the kids laying on their backs looking up at the sky and the stars. When you’re in a big city with all the lights you can hardly see the sky or the stars and it was just an amazing clear night that night so I asked them what they were doing and they turned around and said at the same time, “We’ve never seen a sky like this.” And they were just in awe. I sat there with them and looked up and thought ‘this is pretty neat,’ especially for these kids! It was great for them and great for me to be a part of it and was really touching for sure.”

What exactly is this foundation you may ask? Hartnell explains, “Two Decembers ago there was thing on Twitter making fun of how I fall down in games and I had just started on twitter and was getting all of these tweets and my agent’s wife thought it would be funny to start this thing where we made shirts that said #HartnellDown on them and sell them. We thought we were going to sell like 50 of them and give the money to a charity in Philadelphia or wherever. She ordered 100 T-shirts and they were gone in a day so then she ordered 500 and they were gone in a week and we were like “Holy man this is really catching on!” People were really having a lot of fun with it and I look back on it and we turned something negative, somebody trying to make of me, into something so positive! Now we’re helping kids in the Philadelphia area, through the Ed Snider Youth Hockey Foundation, bringing kids to Minnesota Hockey Camps in Brainerd, MN and getting them out of Philadelphia where they hardly leave their three or four block radius. Now they are going to a different state on airplanes to be at a hockey camp where there’s not just me but also Wayne Simmonds and T.J. Oshie from the Blues and all of these other players who are there doing serious training to get ready for the hockey season coming up.”

The #HartnellDown Foundation now boasts a celebrity golf classic, merchandise, and countless other community outreach projects. As far as where the foundation goes next Hartnell simply states, “The sky is the limit.”

Scott seems at home working with the campers and was quick to explain his favorite part about being involved with the foundation and the kids, “I think it’s awesome to see the smiles on the kid’s faces and get to experience what the money and people’s donations are doing and it’s really a great thing. Just being there one-on-one with the kids, to joke around with them, to get on the ice with them and to see their faces light up when us pros are out there working hard doing circuits and seeing how hard we still work for our team even though we’ve already “made it” is incredible.”

Hard work is a concept being taught to each and every camper at Minnesota Hockey Camps, and it is something very familiar to Hartnell, something he now not only preaches to the youth players at camp, but something he practices and sets the example for. Last season the left winger struggled to gain momentum going into the season, as most NHL players did coming off the lockout, and just as it seemed the Canadian player was getting into the groove, three games into the regular season he broke his foot. Facing unexpected setbacks, he was forced to regroup and refocus. “This is probably the hardest I’ve worked off the ice to get in shape for a season. I know fans were disappointed and so was I [last season], it sucked coming off a lockout, working out was tough mentally and then breaking my foot three games in was really tough and I was really behind coming back in.” He continues, “So I’ve really buckled down and start skating here in the next week or two and be consistent with that then get to Philly and have a good start. That’s the most important thing.”

Hartnell wouldn’t have life any other way and is proud to be a part of the hockey community and is grateful for everyone involved in the #HartnellDown Foundation. He gave some hints on how you can get involved with the foundation! “We have our website www.hartnelldown.com and there’s cool merchandise on there as well as a golf tournament in Philly in September where some of the guys will be out and we’ll need volunteers for that!”

Scott holds the #HartnellDown Foundation close at heart and gave some final comments on where it began and where it’s going, “It’s fun and it was something negative that we turned into a great thing! I’ve actually talked to the guy who started the whole deal [on twitter] gave him tickets to a game and met him after and told him what I was going to do and he was shocked but thought it was really awesome. It’s a cool thing we’ve got going and something hopefully people enjoy and keep supporting!”

The hockey community is known for their charitable causes and foundations and the #HartnellDown Foundation lives up to the reputation of being centered on simply improving the quality of life for not just those in hockey, but for everyone in the community. An outstanding foundation for a more than worthy cause.

The golf tournament Scott mentioned is being held on September 18, 2013 at the Scotland Run Golf Club in Williamstown, NJ. Details can be found at www.hartnelldown.com where you can also find all that cool merchandise Scott mentioned! Be sure to follow Scott on twitter at @hartsy19 and use the hashtag #HartnellDownwhenever you mention him in a tweet!

For more fun hockey news be sure to follow Minnesota Hockey Magazine on twitter @mnhockeymag and the author @AmySnow17!