Haula and Wild both surging 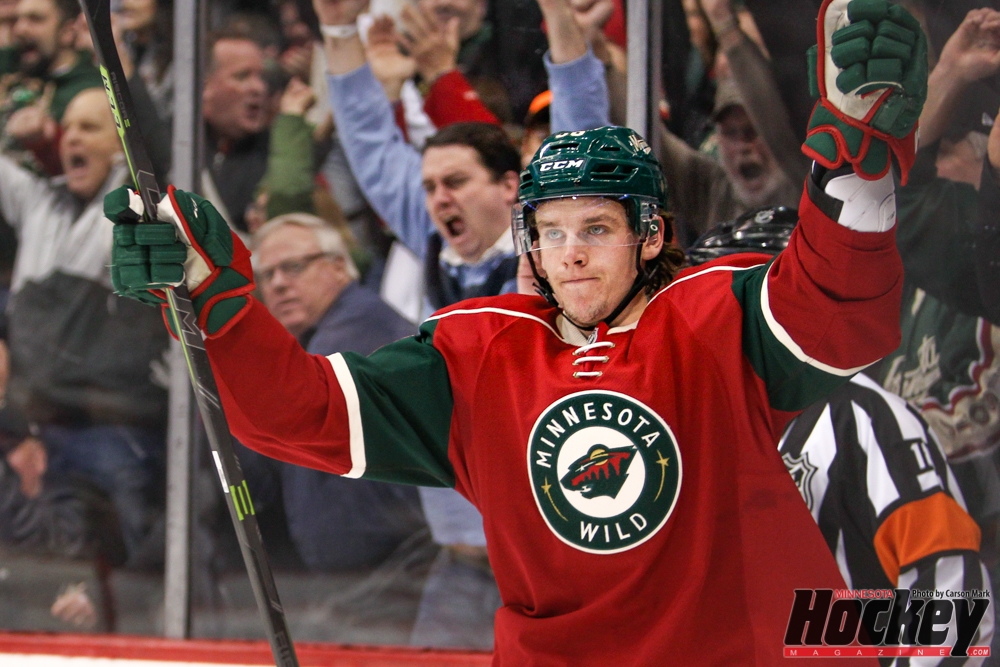 Haula quickly discovered that it’s a penalty to do so, and got a delayed call for flipping his stick. During that delay, the Colorado Avalanche scored to pull within 3-2 in the second period of Tuesday night’s big Wild-Avalanche game at the Xcel Energy Center.

But it was a rare mistake for Haula as the Wild scored three goals in the first period and three in the third to defeat Colorado 6-3 and pull even with the Avs for the eighth spot in the Western Conference playoff race.

Haula scored his team’s third goal, went plus-three for the evening and has now tallied five goals and seven assists in Minnesota’s past 12 games.

Coincidence or not, the Wild have won six of their past nine games under interim coach John Torchetti, whose team got two goals from Nino Niederreiter and Charlie Coyle plus a goal and two assists from Jason Pominville and two assists from Zach Parise in front of 19,107 Tuesday night.

The line of Haula, Pominville and Niederreiter started the game for Minnesota and not only contributed seven points, but mostly shut down the Avs’ big line of Gabriel Landeskog, Mikkel Boedker and Nathan MacKinnon.

His three, Torchetti explained, “want to play on both sides of the puck. I think the whole team can learn from that.”

Each of the three had a first-period goal as Minnesota jumped to a 3-1 lead and threatened to pull away, but Colorado came back to tie in the second period. Coyle broke the tie 5:34 into the third period, then added an empty-netter as did Niederreiter.

“Our line’s working well,” Haula said. “We ended up getting some good plays off the rush there in the first period; getting three goals is always nice. And then we stuck with it. Second period probably could have been a little better, but overall a good job and a good win.”

Haula, a three-year regular at the University of Minnesota, scored the dazzling go-ahead goal Sunday when Minnesota defeated Florida 3-1. A part-timer or mostly a checking-line center until this season, he has played 58 of Minnesota’s 65 games and leads the team with a plus-16 rating. His surge has been timely and astonishing: he had four goals and seven assists for 11 points through his first 46 games.

But it has come as no surprise to Torchetti, who previously coached Haula with the Houston Aeros when Haula broke into pro hockey in 2013.

“He’s skating,” Torchetti said. “He’s moving his feet, and his speed really shows when that happens.”

Haula shrugged off his great play of late.

“Got to give credit to Nino and Pommer, too, they made great plays tonight,” he said.

Chemistry among the three has become obvious of late.

“We read off each other pretty well,” Haula said. “The dynamics are there for our line and we understand what we have to do night in and night out with the matchups.”

While the offense has been clicking for Haula of late, he insists he’s still a role player who needs to contribute on defense, as well.

“I know my role,” he said. “Playing against those top lines and trying to keep them off the board and then creating offense from there, we’ve got some good looks.”

The looks seem to be finding Haula much the way they did at the University of Minnesota, when the 5-foot-11 Finn totaled 100 points over his sophomore and junior seasons.