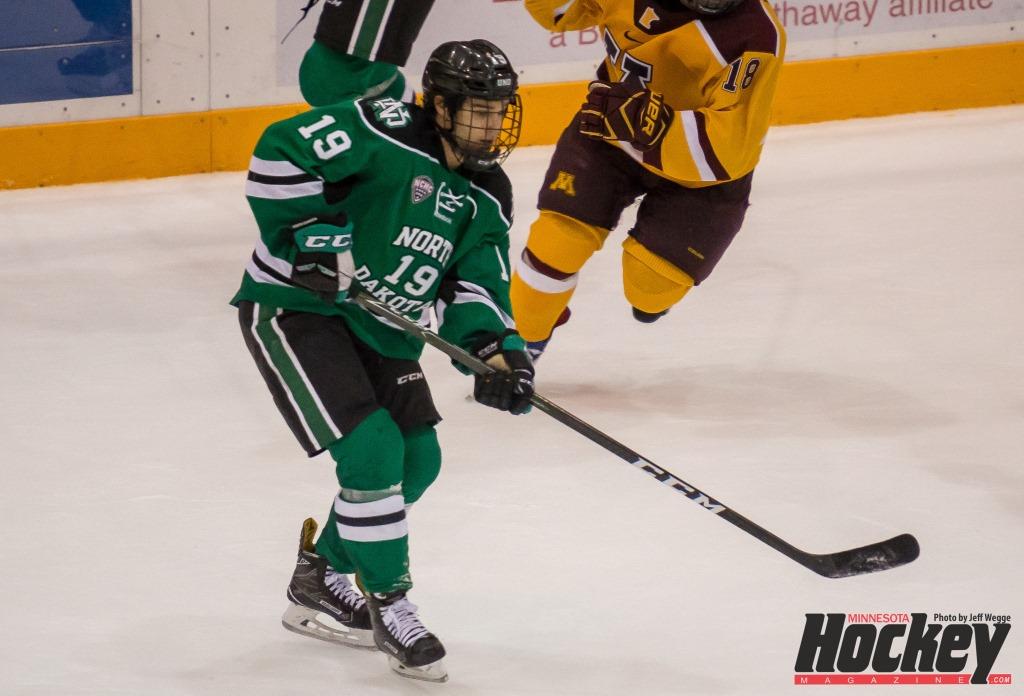 Call it a four-game point streak with an asterisk.

Shane Gersich has found the back of the net seven times in in the last four games, the most creative of the seven doesn’t exactly count and on Saturday, the North Dakota sophomore left wing drew “Hobey Baker” chants after his fourth goal of the weekend ensured a sweep at St. Cloud State.

It’s been a crazy couple of weeks in a breakout season for Gersich, a native of Chaska who played high school hockey at Holy Family Catholic. He has 10 goals and eight assists through 13 games, making him 11th in the nation for points per game at 1.38.

“I’m playing with some great players, whether it’s Tyson Jost, Austin Poganski or Brock Boeser, whoever it is. I’m playing with confidence right now and things are working.”

Gersich wasn’t on the scoresheet until the third period of the Nov. 19 game at SCSU until early in the third period when his one-timer gave the Fighting Hawks a nice three-goal cushion. The night before, Gersich recorded his first collegiate hat trick.

The three-goal performance was Gersich’s sixth multi-point game of the season.

“We have the mentality of never being satisfied,” Gersich said. “If you get one, you want one more and you want to get better as the game goes on.”

When UND’s winless streak reached its height at six games on Nov. 12 after a 3-2 loss to Denver, it was Gersich providing the offense with both goals for the Fighting Hawks.

The “asterisk” finds itself attached to the Nov. 11 game against Denver when the teams remained tied after the five-minute overtime period in a game on Nov. 11 in Grand Forks, but the play of the game came after the game had finished on the official box score.

Teams play an extra sudden death 3-on-3 session (for one extra point in the standings) if a game is still tied in NCHC play, and that’s when Gersich unleashed a spin-o-rama plus a backhanded lacrosse-style shot that hit the back of the net.

“I just kind of pulled that one off out of nowhere,” Gersich said. “We work on our edges and a lot of that skill stuff with Coach (Dane) Jackson and Coach (Matt) Shaw.”

It didn’t count as an official goal and the result doesn’t go down in the books as a win for the Fighting Hawks, but Gersich caught the attention of social media and was a top highlight on national TV networks.

The flashy highlight-reel goals and individual point streaks were not part Gersich’s first season at UND, as he played a small role on the team that skated to the national championship.

“Last year I wasn’t in much of a position to be putting up big numbers,” Gersich said. “This year, I wanted to be more of an impact player and I have an opportunity and I’m trying to make the most of it.”

Added UND coach Brad Berry: “His ability to be a consistent player (is the area in which Gersich has grown the most). It all starts with him investing in his game. He comes to the rink every morning and works on his skills.”

Poganski, a junior from St. Cloud, joined Gersich and freshman center Jost (replacing Boeser) as the right wing on what became UND’s No. 1 line against SCSU. Poganski’s and Gersich’s bond goes back many years.

“We played together on ‘Select’ teams and kind of toured different schools together and North Dakota worked out,” Poganski said. “He’s having a fantastic year.”