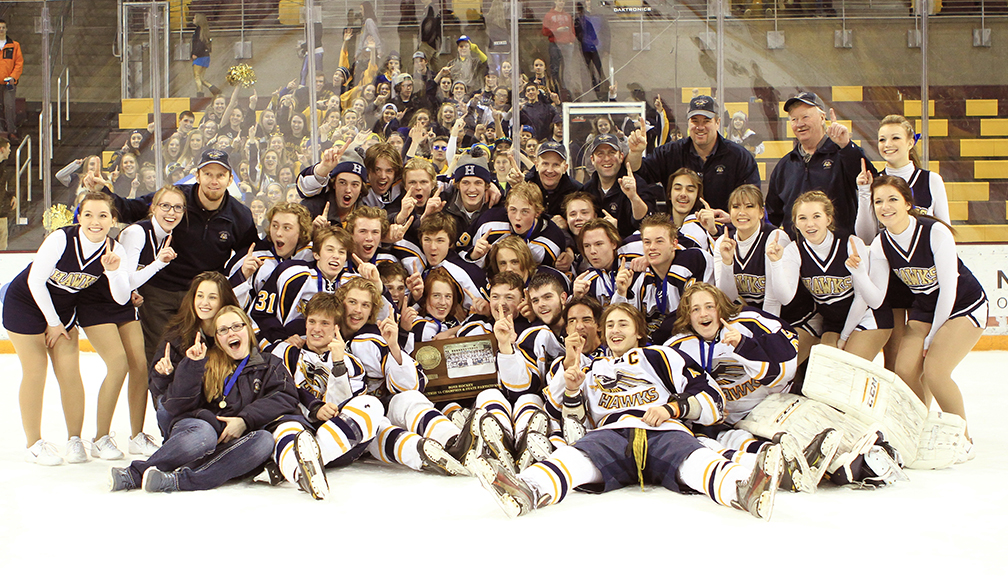 The Hermantown Hawks pose for a team photo with their Section 7A championship trophy in front of their student section. (Photo / Dave Harwig, special to MHM http://www.viewthroughmylens.net/)

DULUTH – There’s an old saying that it’s hard to defeat the same team three times in one season. None of that seemed to bother the Hermantown Hawks Wednesday evening.

Taking advantage of a smothering defensive effort, the Hawks scored twice in both the second and third periods before shutting the door the rest of the way to claim a 4-0 win over Duluth Marshall at Amsoil Arena and advance to the Minnesota State High School Hockey Tournament as champions of Section 7A.

Ryan Kero netted two goals while Nate Pionk added a goal and assist for Hermantown (25-2-1), which defeated Duluth Marshall for the third time this season while holding an impressive 43-14 edge in shots for the game.

“Our defense has been pretty darn good all season long” Hermantown coach Bruce Plante said. “Most people think of us an offensive team. But we play good defense throughout our lineup.”

Following a scoreless first period, the Hawks got the game winner on the power play just 3:15 into the middle frame when Kero converted off a pretty feed from Wyatt Aamodt for his 28th goal of the season for a 1-0 advantage.

“He just found me in an open pocket” Kero said of Aamodt’s pass. “After that, I was able to beat the goalie.”

Hermantown doubled their lead at 13:55 when Parker Hawk netted his 10th tally off a pass from Ryan Sandelin to make it 2-0 after two.

From there, Hermantown added Pionk’s 31st goal of the year at 7:57 of the third on assists from Cole Koepke and Sandelin before Kero closed out the scoring with his second marker of the game at 11:39 from Aamodt to make the final 4-0.

Luke Olson picked up the win in net for Hermantown stopping all 14 shots he faced. The Hawks will be making their sixth straight trip to the State Tournament.

“The first game is always the toughest,” Plante said of the state tourney. “The biggest key is that we stick to our game and play our style. If we can just play our game, we’ll be in good shape.”

Alex Murray finished with 39 saves for Duluth Marshall, which finished 19-6-3 on the year.