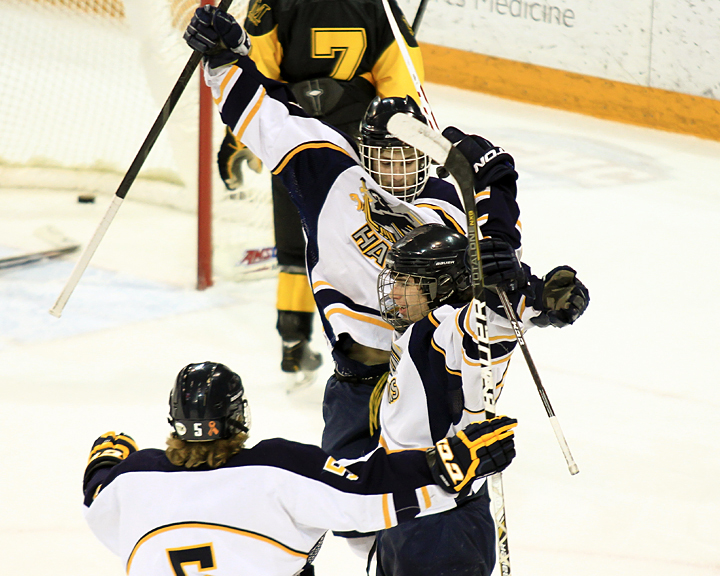 DULUTH—While the Section 7A semifinal game between Duluth Marshall and Hermantown started out as a competitive one, the Hawks quickly took over for a decisive 6-2 over the Hilltoppers on Wednesday night at AMSOIL Arena in Duluth.

It marks the second straight season the Hawks have eliminate the Hilltoppers, having ousted Marshall from the state tournament a year ago in the Class A state quarterfinal when coach Bruce Plante’s Hawks qualified in Section 5A. Hermantown rolled through Section 7A, outscoring its opponents—International Falls and Duluth Denfeld being the others—by a combined 21-3.

Hermantown’s top line, consisting of Nate Pionk, Scott Wasbotten and Ryan Kero, crashed the net at 2:29 of the first and Pionk potted a Wasbotten rebound for his first goal of the night to take an early lead. 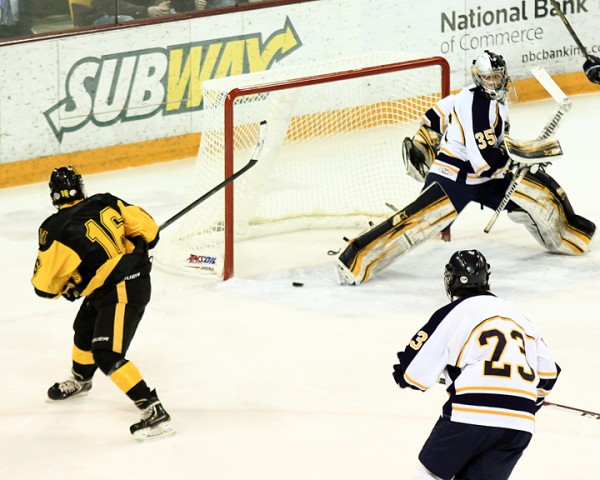 Marshall fought back with a goal of its own, however, less than four minutes later. Hilltoppers forward Luke Pavelich took advantage of a wide rebound from just inside the left circle for a backhanded goal.

The rapid-fire scoring did not end there as the Hawks would add another, Pionk’s second goal of the game, all within eight minutes of the opening faceoff. A third Hermantown goal would be added before the period ended, this time by Wasbotten.

“We knew Marshall was a good team,” Pionk said. “Every game was tough and they battled, everyone battles in this section. We knew we’d have to bring it in this section, the compete level is so high.”

The second period saw more even exchange of chances early, with both Marshall and Hermantown creating opportunities for themselves. Marshall struck first in the period, taking advantage of a weird bounce of its own nine minutes into the frame. Jon Hansen beamed a puck in from the point that deflected in over Hawk goaltender Adam Smith’s shoulder.

Smith quickly redeemed himself with a big save seconds later and was lights out from that point on, finishing with 22 saves.

Hermantown was not done with the scoring however as Pionk would complete his hat trick while Kero added a goal of his own.

Duluth Marshall did a much better job of controlling the Hermantown offense in the third period, allowing just one shot on goal through the first ten minutes of the stanza and only four overall in the third. The Hilltoppers had a strong offensive surge in the last dozen minutes of the game, but were unable to convert.

Adding insult to injury, Hermantown’s Kero added an empty net goal as time expired for a final score of 6-2 to advance on to the state quarterfinals.

“It feels great, it’s amazing,” Pionk said. “To win here in Duluth in front of all these people, I’m pumped.” 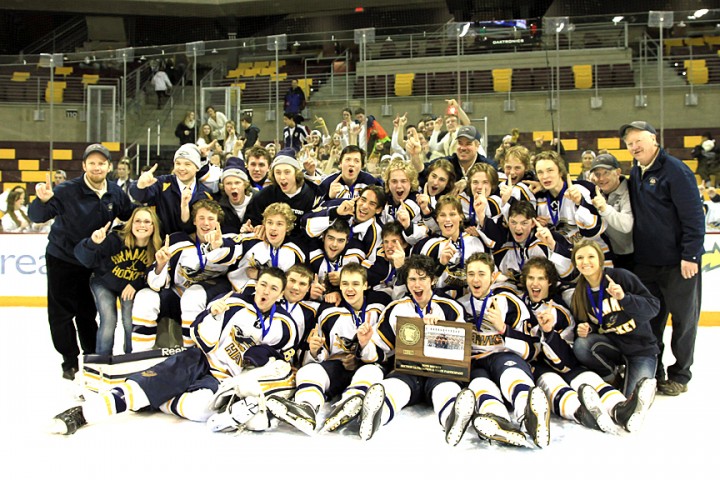