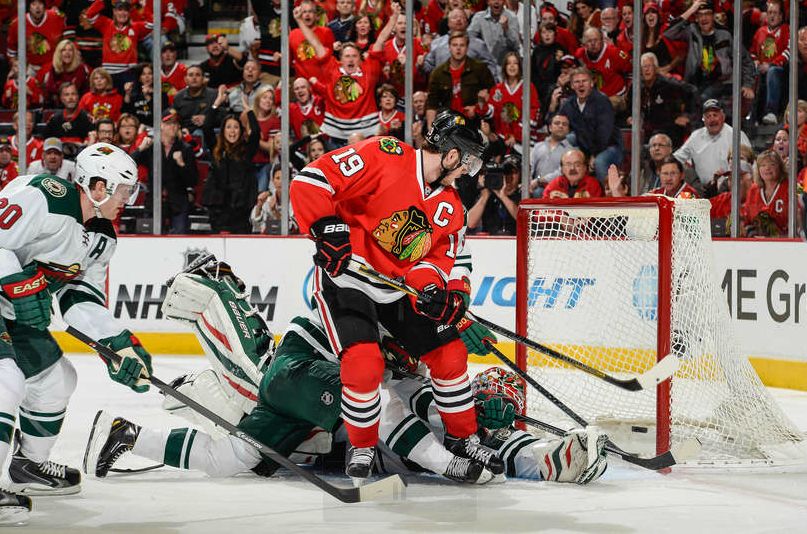 Jonathan Toews #19 of the Chicago Blackhawks scores on goalie Ilya Bryzgalov #30 of the Minnesota Wild in the third period, as Ryan Suter #20 of the Wild skates behind, in Game Five of the Second Round of the 2014 Stanley Cup Playoffs at the United Center on May 11, 2014 in Chicago, Illinois. (Photo by Bill Smith/NHLI via Getty Images)

As Minnesota returns home from Chicago after falling 2-1 to the Blackhawks in Game 5 Sunday night at the United Center, the Wild cannot look back at its missed opportunities in the loss … primarily due to the view-concealing wall firmly pressed against their backs.

The Wild played a solid opening 20 minutes to carry a 1-0 lead into the second period in their quest to give themselves a chance to close out the series in Tuesday’s Game 6 in St. Paul. But Wild killer Bryan Bickell scored midway through the second and Hawks captain Jonathan Toews scored his fourth game winner of the postseason early in the third to lift Chicago over Minnesota and take a 3-2 series lead, pushing the Wild to the brink of elimination.

The must-win is not unfamiliar to the Wild as Tuesday’s elimination game will be the Wild’s third of the postseason after winning games 6 and 7 against Colorado in round one. But that was against the up-and-coming Avalanche, not the defending Stanley Cup Champion Blackhawks, a far more daunting task to say the least.

Blackhawks goalie Corey Crawford found the home crowd more to his liking and rebounded from a pair of subpar performances at Xcel Energy Center to make 27 saves in the win. A couple of first-period goal post shots off the sticks of Minnesota’s Charlie Coyle and Justin Fontaine were also quite helpful.

Ilya Bryzgalov kept the Wild in it, in his own unique and heart-stopping way, with 26 saves of his own as the Blackhawks got off a series high 28 shots. While he got away with a few mistakes through the game, neither Chicago goal could be pinned on him.

Chicago tied it at 9:18 of the second on Bickell’s power-play goal with Wild defenseman Jonas Brodin off for hooking. Bickell had set a screen for Patrick Kane when Kane’s shot hit Bickell near a sensitive area, dropped to the ice and bounced over Bryzgalov’s right pad to make it 1-1 after two periods.

Entering the contest, second round teams were 19-0 when scoring first but someone clearly forgot to tell Toews. After Bryzgalov stopped Patrick Sharp’s initial shot, the bouncing puck was settled by Marian Hossa and fed to Toews who scored his fifth of the playoffs just 4:33 into the third.

The Wild made their push over the final 15:27, even outshooting the Blackhawks 14-7 in the final period, but Crawford stopped everything including attempts by Ryan Suter, Nino Niederreiter, and Zach Parise in the waning moments.

Former Gopher Erik Haula continued to shine for Minnesota in his rookie season and put his team on the board late in the first period.

Haula picked up a Jared Spurgeon pass in the Wild’s zone, blew by Kane and around Duncan Keith in the neutral zone and fired a shot from the top of the circles which Crawford stopped. But the speedy Haula followed his shot, beating Chicago defenseman Brent Seabrook to his own rebound for his third goal of the playoffs.

Tuesday’s Game 6 is scheduled for 8 p.m. and can be seen, once again, on CNBC.