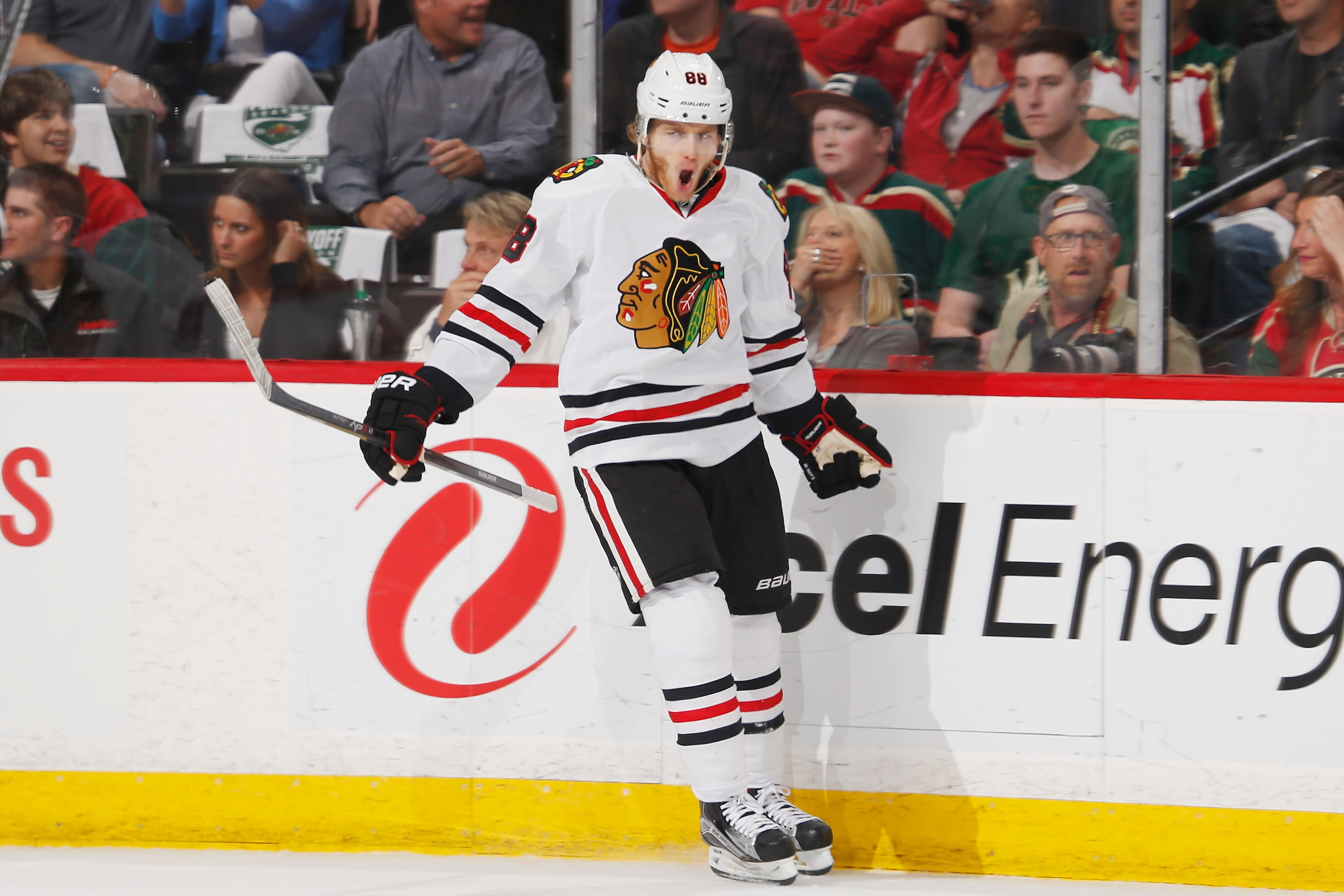 Chicago’s Patrick Kane celebrates his first period goal which turned out to be the game winner in the Blackhawks’ 1-0 win over Minnesota in Game 3 of their Stanley Cup Playoff Western Conference semifinal series on Tuesday night at Xcel Energy Center. (Photo by Bruce Kluckhohn/NHLI via Getty Images)

St. Paul — This year was supposed to be different.

After consecutive postseason exits at the hands of the Chicago Blackhawks, the maturing, playoff-tested Minnesota Wild with its goaltending situation no longer in question was poised to exorcise its Windy-City demons.

But after seizing a 2-0 series lead at home, Chicago was not about test fate two years in a row by returning to United Center for Game 5 tied 2-2. The Blackhawks sucked the Energy out of the Xcel Center in Game 3 with a first-period goal and held the Wild at bay from there for a 1-0 win giving Chicago the opportunity for a series sweep on Thursday in St. Paul.

A disappointed Minnesota coach Mike Yeo said the Wild, in a lot of ways, did what they needed to win but he also knows what they are up against.

“We didn’t get the result that I think we deserved tonight,” he said. “There’s no feeling sorry for ourselves right now. It’s disappointing where we’re at, but we’ve got one job to do and that’s win a game.”

None other than Wild killer Patrick Kane put the Blackhawks up 1-0 on a shot from near the bottom of the left circle which found its way between Wild goaltender Devan Dubnyk’s pads at 14:06. The power-play goal was Kane’s fourth tally of the series in seven periods and his sixth of the playoffs.

It was all Chicago goaltender Corey Crawford would need as he shut out the Wild with a 30-save effort.

“Crawford, he’s a star against us,” Yeo said. “He’s (Martin) Brodeur. He’s (Patrick) Roy. He’s everybody against, so we’ve got to find a way to solve that.”

Crawford, who was pulled early in Chicago’s opening round series against Nashville and even temporarily lost his starting job to Scott Darling, has been stellar for the Blackhawks in the series having allowed just four goals in three games.

Minnesota is no stranger to digging itself a hole from which no one expected it to crawl out of after recovering from an 18-19-5 start to go on an improbable 28-9-3 run down the stretch just to make the playoffs.

But even the Wild may have bitten off more than they can chew in this case.

“We all know what we’ve been through and overcome, but … like I said, we’re in a hole,” Wild assistant captain Zach Parise said. “We gotta reset and try and get that next one.”

The Wild came out of the gate hard and fired the game’s first four shots before Chicago notched its first 5:49 into the game. But the Blackhawks rattled off the next six and eight of the period’s final 12 shots including Kane’s goal.

“Our start was excellent,” Yeo said. “But then as the period went on we started to turn pucks over again and that I think led into some chances coming back at us, and that kind of helped them feel a little bit better about their game.”

First-period scoring, or lack thereof, has been a problem all postseason for Minnesota, but not so much for its opponents. And Tuesday was no exception. For the sixth time in nine playoff games, the Wild allowed the game’s first goal and they have been outscored 10-3 overall in the opening period.

“First period we were skating good but we were kind of working against ourselves,” Wild defenseman Ryan Suter said. “We turned the puck over a lot and we’d have to come back hard. And that wears on guys.”

“Certainly against that team there’s a big difference when they score first,” Yeo said. “It gives them the ability to sit back and defend a little bit more and forces us, not to open up, but it’s a little more difficult in terms of creating some situations.”

It wasn’t for lack of chances, though, as the Wild produced several prime scoring opportunities, particularly over the final two periods. But the combination of an inability to finish chances and the resurgence of Crawford conspired to put Minnesota on the brink of elimination.

“It’s right there for us but we couldn’t find a way to get in the net,” Minnesota forward Charlie Coyle said. “That’s what it came down to. Hat’s off to that goalie, but we’ve got to put pucks in the net.”

Minnesota’s power play which was so good in its six-game elimination of St. Louis in the first round has vanished against Chicago. Minnesota was 0-for-3 with the man advantage on Tuesday with just three shots on goal including a critical power play midway through the third period which didn’t generate a single shot.

“We’ve been moving it well and getting good looks,” Suter said of the Wild’s power play. “We had a couple chances and couldn’t capitalize. It cost us the game.”

Yeo admitted his team’s dire situation is unfamiliar territory for him but said the Wild will need to focus one one game at a time much like they did from midseason on.

“The only thing I can say is we came back from the dead once before this season,” Yeo said. “And the only way we did that was with character and belief. That’s what we need right now.”

An overnight power outage in St. Paul caused the Xcel Energy Center’s ice plant to shut down for a short time early Tuesday morning. Arena staff, however, had the ice ready for both teams to conduct their morning skates and worked throughout the day to to restore the sheet to game condition. … Minnesota RW Chris Stewart was held out of Game 3 with an upper body injury sustained when Chicago D Johnny Oduya dragged him down near the end boards in Game 2. Normally a center, Jordan Schroeder made his second postseason appearance, and first of the series, in Stewart’s place on the right side of a line with LW Thomas Vanek and C Charlie Coyle. … After making his 2015 playoff debut in Game 2, RW Erik Haula was scratched and RW Ryan Carter saw his first action of the playoffs on Minnesota’s fourth line with C Kyle Brodiak and LW Matt Cooke.