Crusaders cruise past Cougars setting up powerhouse semifinal against Hermantown 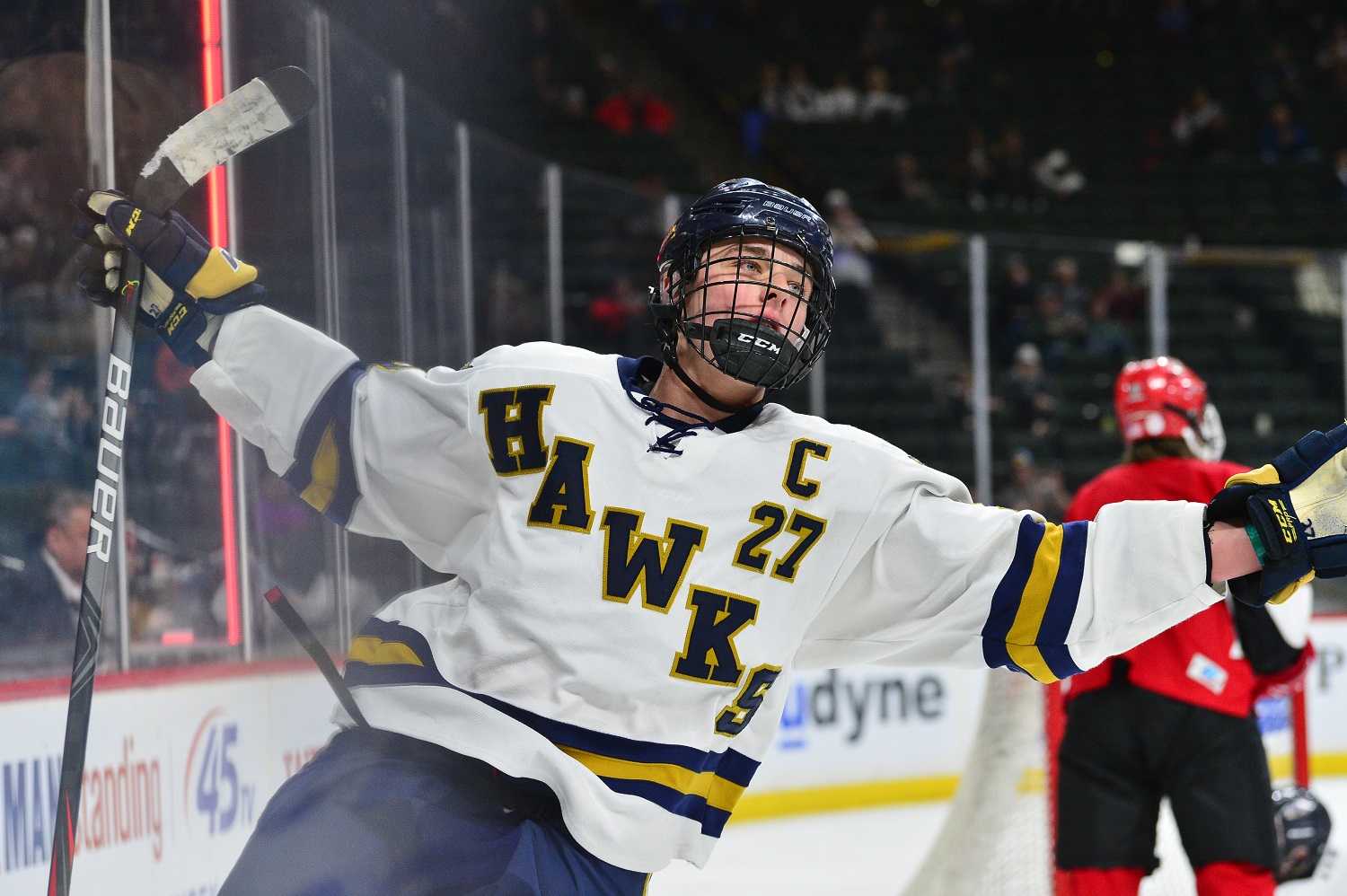 SAINT PAUL – Hermantown missed out on last year’s state tournament, ending a run of nine straight trips from 2010-18. The Hawks were upset in overtime in the Section 7 final by last year’s eventual Class 1A runner-up Greenway.

“It was depressing for a long time,” said senior Blake Biondi. “And we came together as a group this summer.”

After Wednesday’s quarterfinal game, the Hawks appeared comfortable and right back where they belong. Hermantown, this year’s 3-seed in the Class 1A tournament, beat unseeded Monticello 7-1.

Biondi, a Mr. Hockey finalist, scored a pair of goals in the first period, about three minutes into the game and with 50 seconds left in the period for a 2-0 lead, before completing 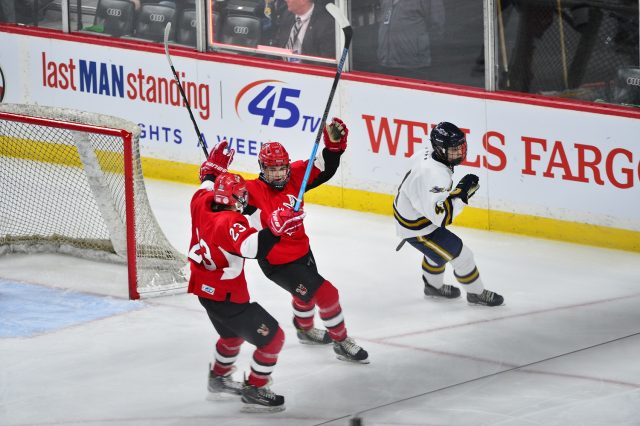 his hat trick with 22.8 ticks remaining in the second for a 4-0 lead. His goals in the first helped give the Hawks some breathing room, said Hermantown coach Patrick Andrews.

“I think it was important to get one right away and then at the end of the first, too, to kind of get some separation going in the second,” Biondi said.

The game was a rematch of the 2017 Class 1A championship game, when Hermantown won back-to-back championships as a top seeded facing an unseeded Monticello team (then Monticello/Annandale/Maple Lake). Hermantown won all three state tournament games in overtime that year, beating the Moose 4-3 with 19.4 seconds left in the second overtime.

Monticello’s (20-8-1) goal came from junior Riley Ronayne when he sent the puck on net from center ice, and it bounced into the back of the net. “Pure luck,” Eric Nelson said.

Even with his team coming out on the losing side of Wednesday’s game, Nelson said anticipation for Friday’s semifinal between Cathedral and Hermantown – a game he said could have been a state-championship match-up – should be high.

“You’ve got two high-powered offenses,” Nelson said. “So, it should be a battle, a toe-to-toe battle. A heavyweight fight.”

Cathedral and Hermantown (22-3-4) will play in Friday’s first semifinal game after having skating to a 5-5 tie back on Jan. 3. Cathedral scored three goals in the third period, the last coming with 25 seconds left in regulation, to tie the game. It was a result that Zach Kilen, who scored a pair of goals Wednesday, called unfortunate from the Hawks side.

“We were up on them going into the third period,” Kilen said. “Just kind of laid back, thought we had it.

“We’re looking forward to a rematch with them.”

Looking at the boxscore, it’s true that St. Cloud Cathedral had a blow-out victory with the 11-2 score. 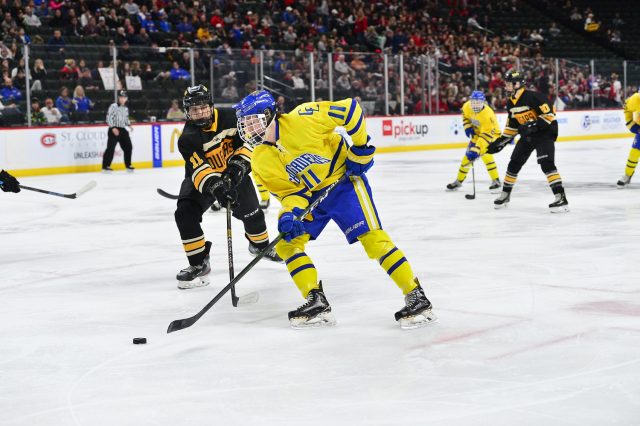 But the game was actually tied 1-1 in the first period.

That lasted for a little less than five minutes though, before 2-seed Cathedral put on an offensive clinic to start the defense of its Class 1A title. The Crusaders (24-3-1) started the third period with running time and had 10 players tally goals in the first Class 1A quarterfinal game Wednesday afternoon at Xcel Energy Center.

“We have a lot of smart hockey players who can hit the open guy easily,” said Mr. Hockey finalist Blake Perbix, who had three assists and scored a power-play goal for a 6-1 lead.

The Crusaders got a shorthanded tally 1 minute, 42 seconds into the game from senior defenseman Reid Bogenholm to get out to a quick 1-0 lead. But on the same penalty, the Cougars tied it up about a minute later with a power-play goal from junior defenseman Jake Schreiber.

Keeping the game 1-1 lasted a few minutes before the Crusaders scored a trio of even-strength goals before the end of the first period to take a 4-1 lead.

Crusaders coach Derrick Brown was happy his team stretched the lead from 2-1 to 4-1 pretty quickly in the first.

“I felt like after that we kind of put it in cruise control, and the guys did a lot of really good things,” Brown said. “We got some really good diversity. We got scoring from all four liens today. As a coach, you feel real good about that moving forward.”

Not only did the Crusaders have the scoring depth, they were able to mix up their lines and get all 20 players some ice time, including junior goaltender Ian Strong, who played the final 6:54 of the game after Grant Martin made nine saves in the game.

The Cougars got another one back late in the second period from Parker Anthony, but Cathedral scored two more times before the period was over – 40 seconds apart – to take a 9-2 lead into the second intermission on goals from Jack Smith, his second of the game and 25th of the season in only 15 games played and junior Cullen Hiltner.

In the running-time third period, sophomore Chandler Hendricks scored his first goal of the season to hit the double-digit goals mark for his team in the game.

“I just tipped it, and no one was on me,” Hendricks said. “And then I cellied.”

It was another victory for the Crusaders against the Cougars this season, with Cathedral winning 9-3 on Dec. 28 during holiday-tournament play. Fries called the Crusaders power play, which went 2-for-2, “deadly.”

The Cougars (14-14-1) have yet to win a state quarterfinal game in three trips. They’re 1-5 so far in state tournament play, also playing in the 2006 and 2018 tournaments. They won the 2018 consolation semifinal before losing to Thief River Falls in the consolation championship game.

“There’s never been a team in Mankato that’s brought back even a consolation championship,” Fries said. “I think that’s important for our guys. Why don’t we be the first? Let’s go out there and compete.”