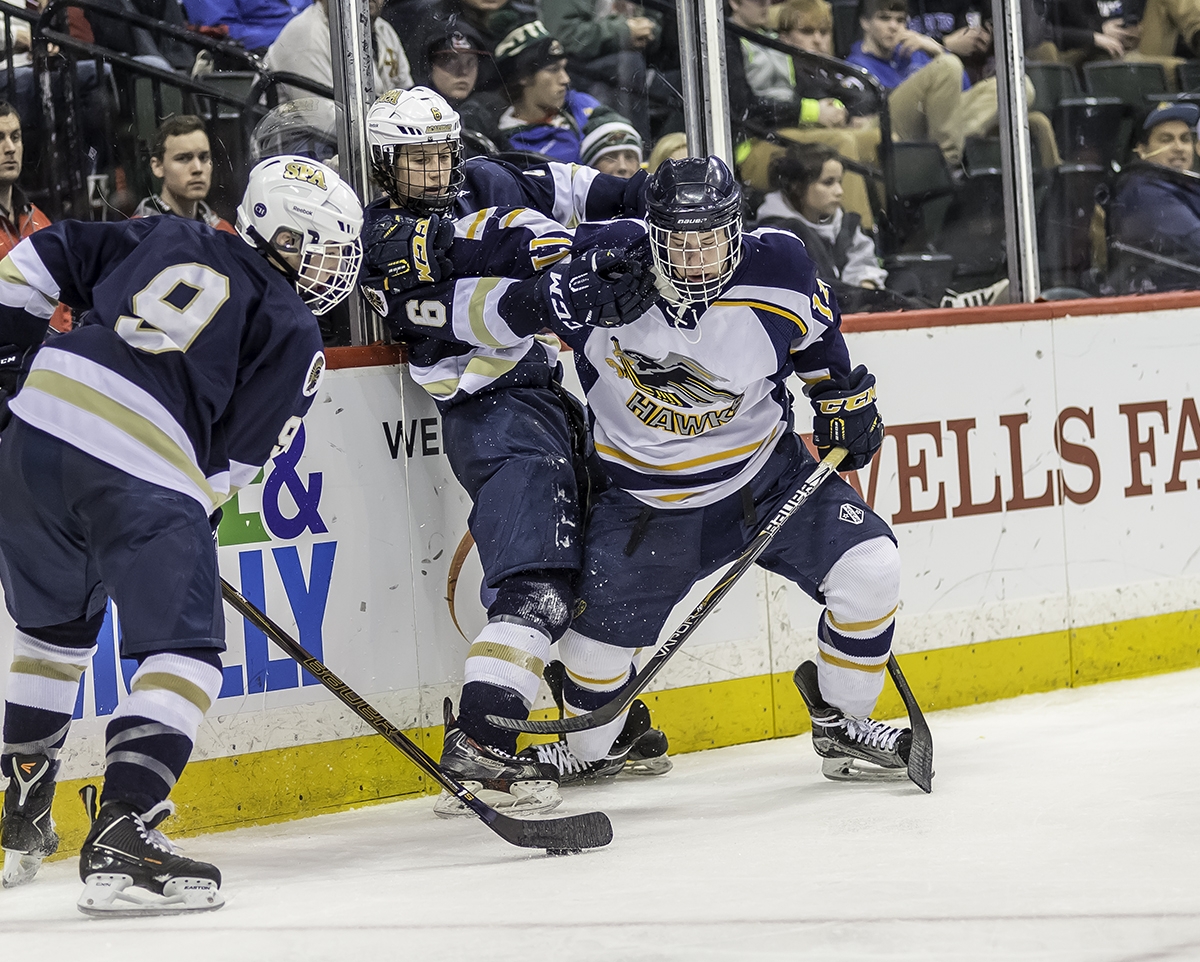 St. Paul – Another year, and the script is pretty similar for Class 1A powerhouse Hermantown. A couple of solid victories in the state quarterfinal and semifinal games to land itself, once again, in the state championship game.

“It’s pretty hard to block that out,” coach Bruce Plante said. “It’s on our resume, as we call it.

“This is the first year now I’ve talked about it with the team. I’ve just talked about it. The heck with it. Try something different, hope we have some luck.”

The latest Hawks trip to the final game comes after a dominant 7-1 victory, as the top-seeded Hawks (26-2-1) beat No. 4 seed St. Paul Academy (24-6-0) in the Class 1A semifinal Friday afternoon at Xcel Energy Center. Ten Hawks earned points, seven of them had multi-point games and five different players scored goals. Junior center Ryan Sandelin and junior Logan Judnick each had a pair.

Hermantown’s top line picked up right where it left off after a stellar quarterfinal performance Wednesday. On the first real scoring chance of the game, and just their second shot on goal, senior Cole Koepke and junior Jesse Jacques assisted to get Sandelin the first goal of the game for a 1-0 lead.

When Koepke made it 3-1 later in the first, Hermantown had just six shots on goal. Similarly, they had just eight shots when Judnick made it 4-1 in the second. That’s 50 percent as the Hawks clearly took advantage of their chances.

“They were very opportunistic in the first period,” said St. Paul Academy coach Matt Funk, who added that it was Judnick’s goal at 1:22 of the second period that was the deflating tally.

Though St. Paul Academy, which was on an eight-game win streak, tied the game at 1 on a power-play goal from junior Will Kelly, it just didn’t have enough to match the Hawks. Hermantown held a 3-1 lead after the first period and took control of the play in the second period, not allowing much offensive zone time for the Spartans, who took four minutes to register a shot on goal in the middle period.

“Ninty-five percent of games this year we’ve played either tied or ahead,” said SPA senior Justin Jallen. “So to play from two goals back against a good Hermantown team is tough to do.”

Sophomore center Tyler Watkins had a goal and an assist, Jacques had a goal and two assists. Koepke and Sandelin each have eight points in the tournament, Koepke with five goals. Those are just some of the numbers St. Paul Academy was competing with in that 7-1 loss.

Now back to that obvious question: Can Hermantown finally capture another state title after six second-place finishes in St. Paul? We’ll know by Saturday afternoon.

Plante tells his players all the time to play their game.

Hermantown will meet No. 2 seed Breck in the Class 1A title game Saturday afternoon. Breck beat Hermantown 2-1 for the 2010 championship, the game that started the six-year, Class 1A runner-up string for the Hawks.

For Plante, he can’t seem to get away from the chatter about the state title drought.

Hermantown’s only state title came back in 2007 over Marshall School of Duluth. The Hawks went 29-0-1 that season.

There’s also the standby debate that gets going: Should Hermantown move up to play Class 2A hockey?

St. Paul Academy’s coach doesn’t think so. Funk thinks the decision to move should be up to the individual school.

“The state puts a lot of pressure on Bruce and his program to move up,” Funk said. “I’m glad Bruce is in Class A.

“We’re in for a great championship game tomorrow.”