Hawks Still A Step Ahead

A year later, faces have changed but the results are very much the same after two games in Chicago. 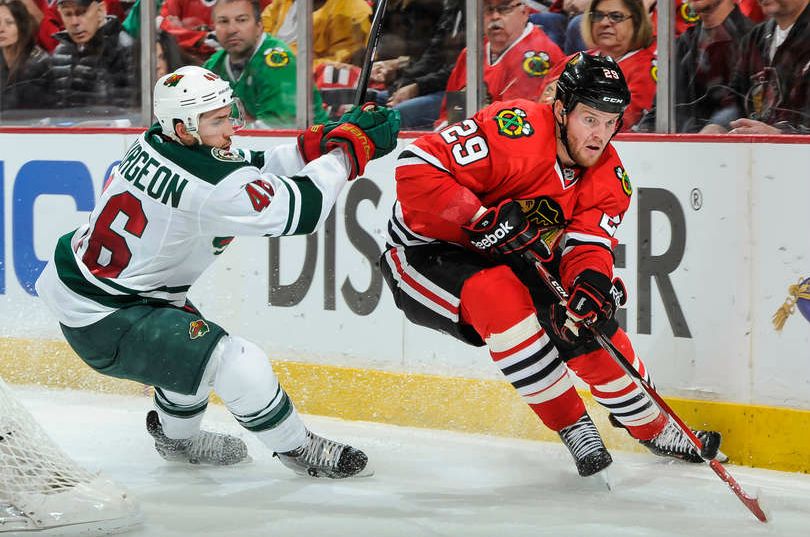 Bryan Bickell #29 of the Chicago Blackhawks and Jared Spurgeon #46 of the Minnesota Wild watch for the puck in Game Two of the Second Round of the 2014 Stanley Cup Playoffs at the United Center on May 04, 2014 in Chicago, Illinois. (Photo by Bill Smith/NHLI via Getty Images)

A year later, faces have changed but the results are very much the same after two games in Chicago.

The more things change, the more they stay the same.

The Minnesota Wild is in the midst of proving that proverb to be true through two games of its second Stanley Cup Playoff series in two years against the Chicago Blackhawks. Although similarities between the two are few, the 2014 version of the Wild finds itself in the same predicament as its predecessor one year to the day later: heading home from Chicago down two games to none.

After falling 2-1 (in overtime) and 5-2 to open the series a year ago, the Wild rebounded to win Game 3 at Xcel Energy Center 3-2 on Jason Zucker’s overtime goal. But Chicago beat Minnesota soundly the next two games by a combined 8-1 margin to finish off a series the Wild were never truly in from the opening faceoff.

Fast forward 365 days and the Wild, despite flashes of territorial domination and more competitive play overall, are now preparing for Tuesday’s Game 3 having merely matched their scoring output and allowing two more goals to the defending Stanley Cup Champions.

This isn’t how it was supposed to be. The Wild made significant, and mostly beneficial, offseason and in-season changes over the course of the past year designed to close the gap with the Blackhawks rather than widen it. In fact, 10 skaters from Wild coach Mike Yeo’s first trip to the postseason with Minnesota are no longer on the roster, yet the predicament remains the same.

As opposed to a year ago, the Wild began the series with Dany Heatley, Mikael Granlund and regular season leading scorer Jason Pominville all healthy and productive with each contributing five points in round one. Between players returning from injury, prospects emerging and trades, Minnesota upgraded its forward corps to spread the scoring load throughout the lineup.

That depth of scoring was crucial in the Wild’s first-round win over Colorado, particularly in Game 7 when the third line produced nine points. Among those who had never suited up for the Wild in the postseason, Granlund, Heatley and Nino Niederreiter led the way, averaging 0.74 points per game in the first round as compared to the top departed trio of Mat Cullen, Pierre-Marc Bouchard and Cal Clutterbuck who averaged 0.47 ppg a year ago.

The Wild received contributions up and down the lineup against the Avalanche and appeared poised to bring that multifaceted attack to Chicago. With half the roster having experienced a Hawks series and with a seven-game series win already under their belts this postseason, the Wild entered the United Center last week a more confident, battle tested and potentially dangerous team this time around.

But through two games in the Windy City, the Wild has been forced to rely solely on secondary scorers to provide primary scoring with Minnesota’s goals coming from the likes of Clayton Stoner, Kyle Brodziak and Cody McCormick. Captains Mikko Koivu, Zach Parise and Ryan Suter, on the other hand, have produced a collective one assist to go with a plus/minus rating of minus-11 thus far.

The output is reminiscent of last season’s two game total of zero points and minus-9 en route to one point and minus-18 for the series for the triangle of authority. That was somewhat offset by their shutdown of Jonathan Toews, Brandon Saad and Marian Hossa on a goal and two assists through the series’ first four games.

The Wild cannot afford for this encore performance to continue, particularly considering the 11 points (4-7–11) Toews, Saad and Hossa have already racked up. This is on top of Pominville and trade-deadline acquisition, and reputed goal producer, Matt Moulson also struggling to find the back of the net.

About the only similarities between 2013 and 2014 heading into this series were the familiar opponent and the fact that Minnesota arrived in Chicago on the heels of a do-or-die win over the Avalanche in Denver. Yes, Yeo is still behind the bench, but he has grown significantly in his leading role, especially over the latter half of the season, and is a much different coach this time around, one who has earned the respect of his players.

The goaltending situation is similar in that a backup goaltender (Ilya Bryzgalov) has been forced into action to start the series in place of an injured starter (Darcy Kuemper). While Bryzgalov had far more notice and more postseason action under his belt than Josh Harding had when he replaced Niklas Backstrom following warm-ups to start Game 1, it had not necessarily been good experience.

While not entirely his fault, the fact remains that Bryzgalov has lost all four of his postseason starts for the Wild and, although he is credited with the win in the Wild’s Game 7 win over Colorado, he was only called upon to make one save in just over 13 minutes in relief of Kuemper.

The silver lining to all of this is this team has already demonstrated several examples of its resiliency to begin these playoffs. The Wild rebounded from a two games to none deficit against Colorado to close out the series winning four of the final five games and trailed four times in Game 7 before prevailing in overtime.

Yeo has shown he is not afraid of tinkering with his lineup and has done a good job of putting his players in a position to be successful. Once in that position, however, it becomes incumbent upon the player to finish his chances, something Minnesota struggled with mightily in Chicago.

The series now shifts to Xcel Energy Center where the Wild are 3-0 this postseason and Yeo can exploit matchups as his team plays its often suffocating, puck-possession brand of hockey. The building was deafening at times in the Avs series and nothing less should be expected this week.

But if Minnesota, particularly its leaders, fail to seize the opportunity to exorcize the ghosts of 2013 the result will inevitably remain the same.