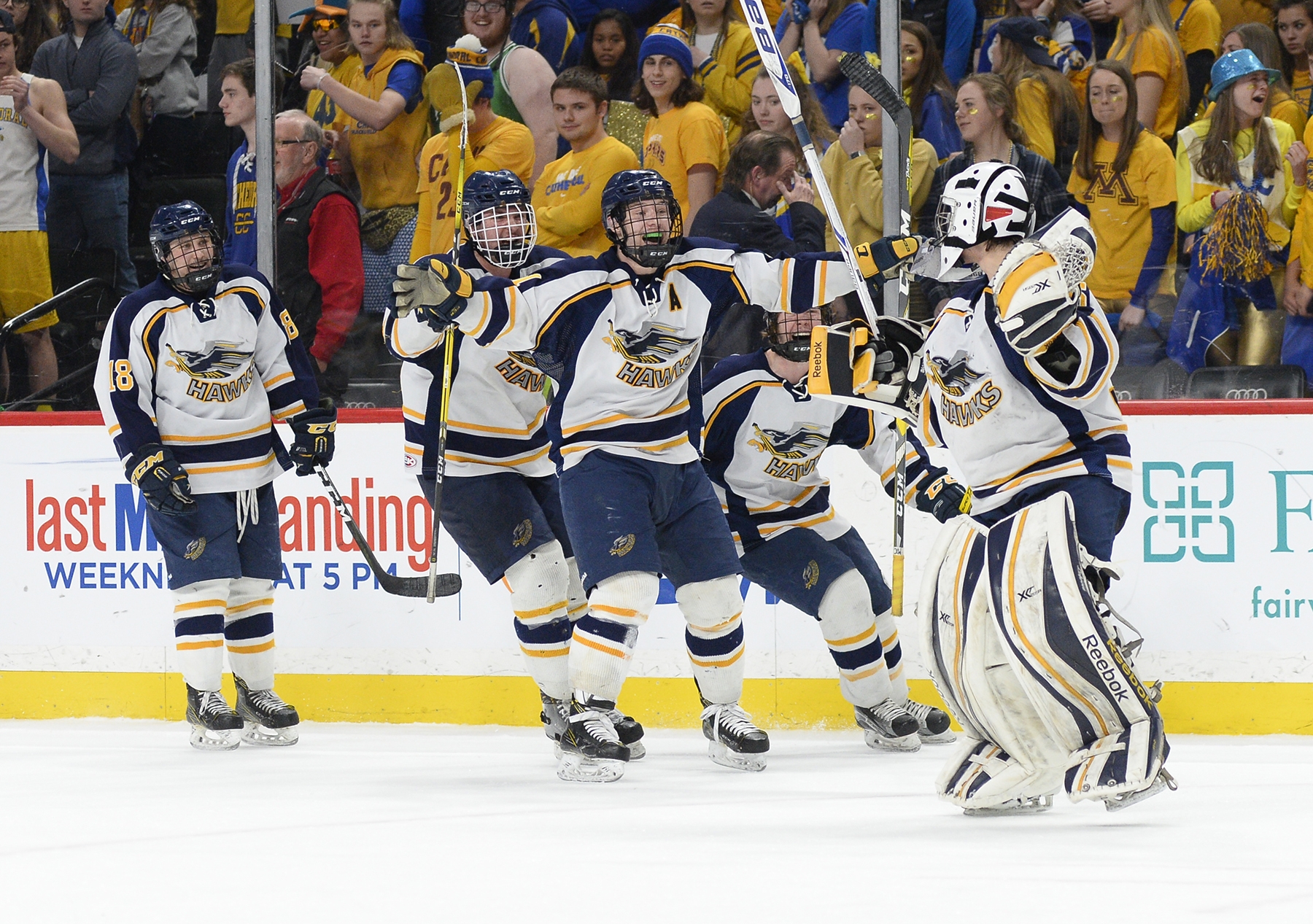 The conversation was brief, but to the point.

With his team trailing St. Cloud Cathedral by two goals with one period to play in their Class 1A semifinal contest, Hermantown coach Bruce Plante pulled captain Ryan Sandelin aside explaining exactly what he needed from him.

“I just hugged him and whispered in his ear, I said, ‘You gotta do it tonight because some of the guys are playing on flat tires so it’s gotta be you,'” Plante said. “He took it from there, he responded great.” 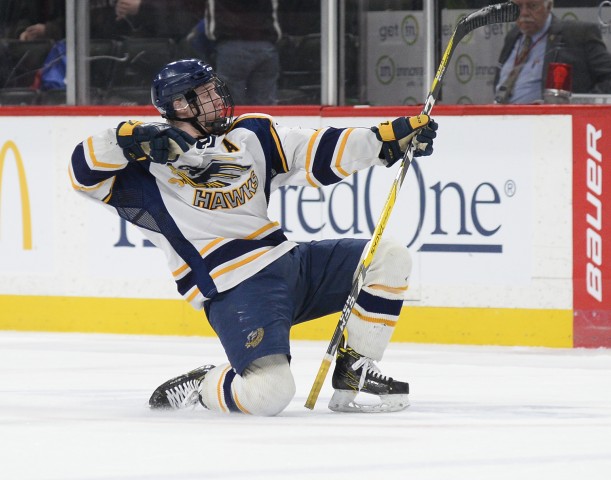 Sandelin did as he he was told, completing his hat trick 55 seconds into the third period sparking a rally he finished with his fourth of the game with 21.3 seconds remaining in the first overtime to lift the Hawks over the Crusaders 6-5 and into an eighth straight state championship game.

Awaiting Hermantown is Monticello/Annandale/Maple Lake in Saturday’s 12:00 p.m. Class 1A state championship game. The Moose are making their first-ever appearance at the state tournament.

It was the second straight overtime game of the tournament for the Hawks who were taken to an extra session by Luverne in the quarterfinals.

That the game even got to overtime is a credit to Cathedral goaltender Jake Levinski who made 60 saves, several of the brilliant variety, including 35 in the third period and overtime.

“By the third period I was already dead,” Levinski said. “It’s so hot out there too. I just had to keep going, I knew we had a chance going into the third period with a two goal lead and I was just trying to keep the team in it.”

“We do still have a young team and we have a lot of kids that have not played in that moment necessarily and, obviously, we knew they were gonna come hard,” St. Cloud Cathedral coach Derrick Brown said. “For them to get the goal 50 seconds in probably wasn’t the best recipe for success for us.

“They found another gear we could not match.”

It was a gear the Hawks were not displaying early on as the Crusaders led 2-0 just over four minutes into the game on goals 18 seconds apart by Connor Beltz and Michael Spethmann. Hermantown’s Matt Valure cut the deficit in half at 12:45 of the first before Sandelin’s first of the night tied it in the second.

But Cathedral answered less than a minute later with three goals in a 1:14 span by Reagan Gardner, Beltz and Jake Van Halbeck to open up a 5-2 lead just past the halfway point of the game.

Despite the shocking turn of events, Plante and Sandelin said the Hawks showed no signs of cracking under the pressure despite assertions to the contrary by Brown.

“We still were strong on the bench,” Plante said. “Guys just felt like they were gonna do it. All the vibes were positive, all the barking at each other was positive.”

“All the boys were just super confident,” Sandelin said. “We all believed in each other and we just knew if we kept chipping away, chipping away, we’d get goals and that’s what happened.”

Sandelin scored his second of the game at 11:27 of the second before launching the final-period surge that included Elliott Peterson’s third goal of the season to tie the game at the 5:42 mark.

After the game, Brown retrieved the game-winning puck and presented it to Sandelin for a keepsake. Sandelin was touched by the gesture and said he couldn’t appreciate it more

“I know it’s tough losing in overtime, especially when they played a really good game,” Sandelin said. “For him to consciously grab the puck and give it to me, that means a lot to me and I can’t thank him enough for that.”